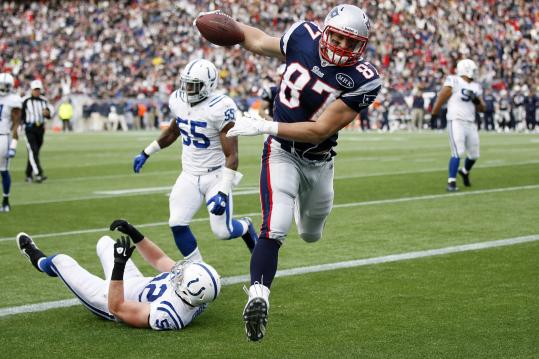 FOXBOROUGH - In almost every other sport, whether it’s baseball, basketball, hockey, golf or tennis, the numbers tell the story.

In football, outside of a few positions on offense, it’s nearly impossible.

There are measures such as touchdowns, yards, and even team championships to help point you in the right direction, but plays are successful for reasons that can’t come close to being tabulated.

Sure, Patriots tight end Rob Gronkowski is accumulating some of the marks needed to be in the conversation.

With three touchdowns in yesterday’s 31-24 victory over the Colts at Gillette Stadium, Gronkowski set the league record for touchdowns by a tight end in a season with 14 in just 12 games.

With 13, Gronkowski needs one more to set the league mark for touchdown catches in a season by a tight end.

“Hey, 14 touchdowns is 14 touchdowns. That’s a lot,’’ Manning said. “Obviously, for a second-year player - wow, is that it? - he has great potential. There’s no question as a guy who appreciates good offensive players, it’s quite impressive. Patriots fans are watching something special there.’’

High praise, to be sure. But that’s just the damage Gronkowski inflicted through the air.

Where he is as a player is so much more than that.

Gronkowski hardly ever drops a pass, even with players belting his 6-foot-6-inch, 265-pound frame often as he’s catching the ball over the middle.

He’s such a good athlete that there’s almost nothing he can’t do in the offense. His third touchdown against the Colts came on a lateral as he became the first Patriots tight end to score a rushing touchdown.

But it’s Gronkowski’s exemplary work as a blocker - something that has no statistics - that has started the talk in some very influential corners in this organization and in the game.

Take a second the next time you’re at Gillette Stadium to take it in: Gronkowski is on a course to become the greatest tight end in NFL history.

You certainly won’t hear that kind of talk from Patriots coach Bill Belichick.

Check your need for personal accomplishments and praise behind the Big Blue Curtain. It’s football communism at its best: You perform for the glory of the team and no other. And the better you are, the worse you get it in film study.

Heck, the most Belichick will say about Tom Brady is that there’s no other quarterback he’d rather have.

Gronkowski is just 22 years old. Yes, 22. He’s in his second season and has played 28 regular-season games.

Gronkowski might as well be wearing diapers in football years. There’s so much further for him to go.

Go back and watch the game against the Raiders when Gronkowski had just three catches but had so many wham blocks in the running game it would have been a season’s worth for any of the other young gun tight ends, Jimmy Graham of the Saints or Jermichael Finley of the Packers.

That’s why Gronkowski should be first-team All-Pro. He does all that the position calls for.

That Belichick even fielded a question near the end of last season that related Gronkowski to former Giants tight end Mark Bavaro was a big indication of how much Belichick thought then of Gronkowski.

“I think that’s a little stretch to compare anybody to a guy like Bavaro, but Bavaro had a great career and he played against some of the all-time greats,’’ Belichick said.

“I don’t mean that in any way to slight our players. I am just saying that you’re putting the bar up there pretty high. He could block, he could catch, he could run, he could run after the catch. He was a great competitor. Mark was there every single week, that’s a guy you can count on all the time.’’

Sure sounds a lot like Gronkowski, who is light years better in Year 2, doesn’t it?

“I think he’s one of the most versatile tight ends that I’ve come across in my career,’’ said Patriots end Andre Carter, who defensed the league’s best in 10 seasons before he came to the Patriots. “He can run, he can catch, he can block, and just look at his size, he’s got some build to him. Some tight ends, technically they’re a receiver. Gronk is the true epitome of the tight end.’’

Opponents see it as well. Move over Tony Gonzalez, Antonio Gates, and Jason Witten. You’re still good, but Gronkowski is the new heir to the all-around tight end throne.

“If he stays healthy, of course with Tom being the quarterback that he is, I think he can break records, man,’’ said Colts safety Antoine Bethea, who is in his sixth season covering the league’s best tight ends. “Especially the touchdowns, he’s doing a hell of a job. Most definitely you put him in as far as right now with Gonzalez, Gates, Clark, Witten. He’s going to be good. I think he’s going to be really good.’’

Dallas Clark of the Colts long has been one of the better tight ends in the league, and knows something about having a special relationship with a top quarterback.

“He definitely has the tools to be a special player and he’s done a great job early in his career already and he’s got a ton of upside,’’ Clark said of Gronkowski. “Who knows what’s going to happen, but he definitely has a lot of raw talent to keep improving on it.’’

Just from watching one game from the sideline, Manning knows what kind of confidence Brady has in Gronkowski.

“Awfully impressive,’’ Manning said after the Patriots’ victory. “When Brady’s looking to him as much as he is in games, that tells you how well they’re practicing together. You just don’t throw to a guy in games that you don’t have great trust and rapport with during the week. That tells you that he and Tom are really on the same page. I’ve always believed as a quarterback, it can’t just happen on Sundays. The two of them have obviously put some time in together in practice, after practice, and that’s showing up.

“Obviously, he’s got an unbelievable physical set of skills. But the fact that he and Tom have gotten on such a great rapport in two years, that’s what’s impressive.’’

The Patriots have been blessed with some great tight ends. Russ Francis, Marv Cook, and Ben Coates were all terrific.

Gronkowski is at least right there with them in his second season.

There have been just two players in franchise history who have set the standard at their positions on a league-wide scale: left guard John Hannah and Brady.

Gronkowski has set the course to join them, no matter how you measure greatness.