McDonald at home on center stage 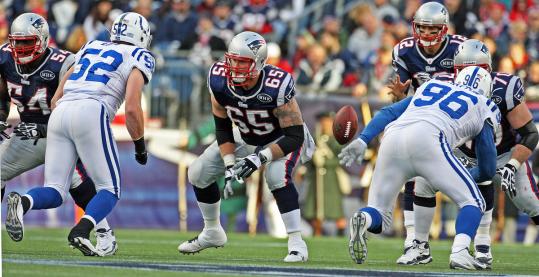 FOXBOROUGH - Something to consider, via wizened guard Brian Waters, about the Patriots’ seemingly unusual or unexpected deployment of personnel:

Whether it’s jack-of-all-trades Matthew Slater starting at safety alongside newcomer Nate Jones, as was the case yesterday during the Patriots’ 31-24 victory over the Colts, or offensive lineman Nick McDonald making his NFL debut in the challenging role of starting center, the reason such players usually perform like they belong in those unfamiliar positions is because they are prepared well before game day.

Waters, a first-year Patriot but a 12-year NFL veteran who has seen his share of linemen arrive and depart, was quick to emphasize that point regarding the performance of McDonald, who gave a steady, uneventful effort after being elevated from the practice squad Saturday.

“I think Nick did really well,’’ Waters said. “He really did. He stepped up big time this week. He didn’t truly know whether it was going to happen or not, but he did really well. He’s done a great job all season of making sure he knows what’s going on and today was proof that you have to be ready when your time is coming and that it pays off to be prepared.

“I know it’s coach-speak, but these guys like Nick really do have to prepare,’’ Waters continued. “They really take reps with the first team every week, and they have to know the game plan as well as [the starters] do. And Scar [offensive line coach Dante Scarnecchia] is always on them about making sure what’s going on, so it’s an easy transition when they have to get in there.’’

Easy does not apply to McDonald’s transition to the NFL. Signed by the Packers as an undrafted free agent out of Division 2 Grand Valley State before last season, he made the eventual Super Bowl champion Packers’ 53-man roster out of camp, but never saw game action. He was cut by the Packers Sept. 3 and signed by the Patriots the following day.

Yesterday, he became the fourth Patriot to start at center this season. Nine-year veteran Dan Koppen, a starter since his rookie season, suffered a fractured left ankle in the opener against the Dolphins and was placed on injured reserve Sept. 21. His replacement, Dan Connolly, missed his second straight game yesterday with a groin injury. And Ryan Wendell, who started last week against Philadelphia, was inactive with a calf injury.

“It felt real good to be out there with the starters,’’ said McDonald, who was given the word that he would start by Scarnecchia Saturday. “I knew there was always the chance I would play, and that’s my approach. You have to be prepared because you never know what is going to happen from week to week.’’

McDonald also plays guard, and he said he last played center in a live game during the preseason for the Packers before last season. But he said he’s worked with Tom Brady “every single day’’ for at least a few snaps, and the quarterback praised his effort yesterday.

“He was good,’’ said Brady. “He stepped in there, his first game as a Patriot, and did a real good job. It started with his week of practice.’’

Added coach Bill Belichick: “I think Nick stepped in and did a good job, did some good things. There are some other things that, I’m sure with experience he’ll do better next time.’’

McDonald had some friends and family at the game, including his girlfriend. But their presence for his debut was somewhat by coincidence. They had been planning to come to this game for about a month, McDonald said, without any expectation he would play.

“I thought I was going to be sitting with them,’’ he said.

Instead, he found himself on the field, literally in the middle of the action. It’s a perspective he wouldn’t mind getting used to.

“The view down here [from the field] is awesome,’’ he said.