FOXBOROUGH - The Patriots pulled off another win Sunday in Philadelphia, their eighth, against an overmatched Eagles team that came up with possibly the worst game plan possible against New England’s offense. Next up for the Patriots: The winless Colts are coming to town Sunday.

So with the echoes of the “Fire Andy!’’ chants from Lincoln Financial Field fading and a couple of days until the collective pumping up of an 0-11 team begins in earnest, let’s examine Bill Belichick’s least favorite subjects:

Yeah, we know, according to Belichick, “stats are for losers and the final score is for winners.’’ But stats have to have some purpose, right? Otherwise, why keep track?

So, after the Patriots’ 38-20 pounding of the Eagles, here is a plethora of statistical evaluations for your reading pleasure (not including last night’s game):

Points per game for: 30.1 (3d in NFL); 2010 - 32.4 (1st) Points per game against: 20.3 (11th); 2010 -19.6 (8th) This might be the one statistic Belichick agrees has merit since, after all, that’s the whole point: to score more points than the opposition. After struggling to score during a three-week stretch against the Cowboys, Steelers, and Giants - a stretch during which they totaled just 57 points, lost two games, and needed a last-gasp touchdown to win in the other - New England has regained its scoring form the last three weeks.

Defensively, the Patriots’ near shutout of the Chiefs helped move them up to a season-high of 10th in the rankings; they slid to 11th after Sunday’s win over Philadelphia, in which they allowed 20 points, their average for the season.

The big difference for New England this season is in the passing game. Both Tom Brady and the Saints’ Drew Brees are on pace to eclipse Dan Marino’s season passing record of 5,084 yards. Brady has six games of more than 300 yards in 2011. The Patriots’ ground game has had its ups and downs, with the nadir coming in Pittsburgh, when they got down early and got away from the run.

But the Patriots are 8-3, the undefeated Packers are 30th in yards allowed at 401.3 per game, and the 7-4 Raiders are 28th. In the case of Green Bay and New England, many of those yards can be attributed to teams trying to play catch-up.

Over and over this season, we’ve heard members of the offense talk about the Patriots’ need to do better on third downs, and a 6-for-11 effort against the weakened secondary of the Eagles showed it’s not exactly an area of concern.

Giveaways/takeaways: plus-6 (15 giveaways, 21 takeaways - T-6th); 2010 – plus-28 (10 giveaways, 38 takeaways - 1st) With Brady throwing just four interceptions last season and the defense going on a late-season turnover binge, the Patriots set a league record in this category so it’s asking a bit much for them to repeat it. But chances are Belichick is pleased with this stat: he’s said before that the player with the ball is holding the fate of the team in his hands. Fifteen giveaways is respectable, and the Patriots have stepped up in recent weeks when it comes to takeaways, feasting on substandard quarterback play from Mark Sanchez, Tyler Palko, and Vince Young. With QBs such as Curtis Painter and Rex Grossman coming up on the schedule, there could be more coming. 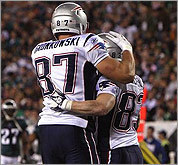