THIS STORY HAS BEEN FORMATTED FOR EASY PRINTING
Patriots 38, Eagles 20

Brady (three TDs) and Patriots soar against Young and Eagles

PHILADELPHIA - Early on yesterday - very early on - it looked as if the Patriots would be challenged by the backs-against-the-wall Eagles.

But then Vince Young showed why he’s been relegated to backup status, Philadelphia showed the type of undisciplined play that’s led to a talented roster being now a near-certainty to miss the playoffs, Tom Brady showed that he is still the reigning NFL MVP, and the Patriots rolled to a 38-20 win at Lincoln Financial Field.

New England is 8-3 and remains tied with Houston, Baltimore, and Pittsburgh for the best record in the AFC. The Patriots even got some help yesterday from their nemeses, the Jets, when New York pulled out a home win over the Bills. New England already has swept the Jets, with one of their three losses coming in Buffalo in September.

“It was a tough week, definitely it was a tough week,’’ a chatty coach Bill Belichick said. “The Eagles are a hard team to get ready for, they have a lot of good players. And the players had a short week [because of a Monday night game against the Chiefs], we were banged up.

“So I give the players a lot of credit for sucking it up and not just physically being out there, but mentally . . . all the preparation and film work and the studying that they did, the extra meetings that they did to really prepare for this game.’’

Eagles fans grew so frustrated by the ineptitude of their team - the squad Young called a “dream team’’ in the preseason thanks to the high-profile free agent signings and trades it made - that they began chanting “Fire Andy!’’ in the third quarter, calling for longtime coach Andy Reid to go.

Reid is the longest-tenured coach in the NFL, having been at the helm in Philadelphia since 1999.

“The way we played, I can understand,’’ said Reid.

Young hit Riley Cooper on a 58-yard bomb on the third play of the game. Cooper, a 6-foot-3-inch second-year wideout, was on the field because Philly’s top receiver, Jeremy Maclin, was injured and unable to play.

Cooper was brought down at the 4, and after two handoffs to NFL leading rusher LeSean McCoy, the Eagles were in the end zone.

The Patriots did little on their first drive, and the Eagles went ahead, 10-0, on their second possession after another long play.

This time Young hit DeSean Jackson for 44 yards over the middle, which put Philadelphia well into Patriots territory. The Eagles got to the 25 before the drive stalled with a tipped pass and two drops. Rookie Alex Henery converted a 43-yard field goal at 8:19 of the first.

“The Eagles, they’re a great team despite their record,’’ defensive lineman Andre Carter said. “We knew they were blessed with offensive weapons. Unfortunately they got us on a deep ball; that’s something we have to eliminate. That will be key for us, as well as stopping the run and getting off the field on third down.’’

They did that yesterday, as Philadelphia didn’t convert a third-down opportunity until the third quarter and finished 4 for 13.

The Patriots settled in during their second chance on offense. Aided by two third-down penalties on Philly - one for 12 men on the field and the other for offsides - that gave them a fresh set of downs in each case, Brady was 4 for 4 on the 12-play drive. BenJarvus Green-Ellis also got the ball six times, the final one for a 4-yard touchdown with 1:27 left in the first.

“We have a lot of veteran-type guys that understand it’s a long game,’’ receiver Wes Welker said. “Even though we were down, 10-0, we put a touchdown on the board and put pressure on them. I think it’s guys stepping up and knowing we have to stay resilient no matter what happens in the game.’’

Brady finished with his seventh 300-yard game of the season, completing 24 of 34 passes for 361 yards, three touchdowns, and no interceptions. He was sacked once and took a few early hits.

Logan Mankins said it took time for the Patriots’ offensive line to adjust to the speed of Philadelphia’s defensive linemen. He tipped his cap to Cullen Jenkins, whom he was tasked with containing; Jenkins got the first hit on Brady, during New England’s opening possession.

New England took the lead early in the second quarter and never looked back.

Deion Branch, who was questionable for the game with a hip injury, had a pretty 63-yard catch-and-run, by far his longest play of the season. Just before he would have been forced out of bounds, Branch stopped and cut back toward the middle of the field, gaining 15 more yards before being brought down at the 1. He lowered his shoulder to try to get the touchdown.

“I tried to run over the tackler, but I didn’t get in,’’ Branch said. “I didn’t make the play myself; all credit goes to the front line and Tom. When Tom scrambles, everybody wants the ball. We work on that in practice all the time.’’

Green-Ellis got the touchdown from a yard out with 13:12 to go in the second, with reserve offensive lineman Donald Thomas acting as fullback.

The play before Branch’s catch, on-the-roster-again Tiquan Underwood missed his chance to announce himself to New England fans. Underwood, a long, fast receiver, received snaps ahead of Taylor Price, who was active but essentially glued to the bench.

Brady hit a wide-open Underwood streaking down the left numbers with an on-the-money pass - and it went off his hands. By his reaction, he may have lost the ball in the lights.

A couple of plays after the Patriots touchdown, Antwaun Molden may have gotten away with pass interference, but he made a nice play on a ball intended for Jackson and returned it to the Philadelphia 34. But the turnover went for naught when Stephen Gostkowski missed a 39-yard field goal attempt wide right.

Still, the Patriots went into the half with a 24-13 lead after a broken coverage led to Welker finding himself wide open near the goal line for a 41-yard touchdown and Gostkowski hit from 45 yards out with 51 seconds to go before the half. In between, the Eagles couldn’t get into the end zone despite having a goal-to-go at the 5 and settled for a chip-shot field goal.

Welker said of his touchdown that the Patriots had run the same play earlier in the game and he noticed that safety Nate Allen bit hard on the play fake. If they called the play again, Welker told Brady he’d run a stutter-go.

It unfolded exactly as the receiver thought it would - Brady ran play-action to Danny Woodhead, Allen bit, and Welker blew past him.

New England got the ball back to start the second half and stayed in the no-huddle it had used with such efficacy late in the first half. Welker scored again, this time on a 9-yard pass, diving over the goal line at the left pylon (he was close enough to being out of bounds that the play was reviewed but upheld) to give the Patriots a 31-13 lead.

It was the eighth touchdown of the season for Welker, tying the career high he set in 2007, his first season with New England.

Rob Gronkowski caught a 24-yard pass from Brady at 8:35 of the fourth quarter to close out the Patriots’ scoring. 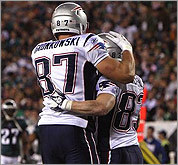