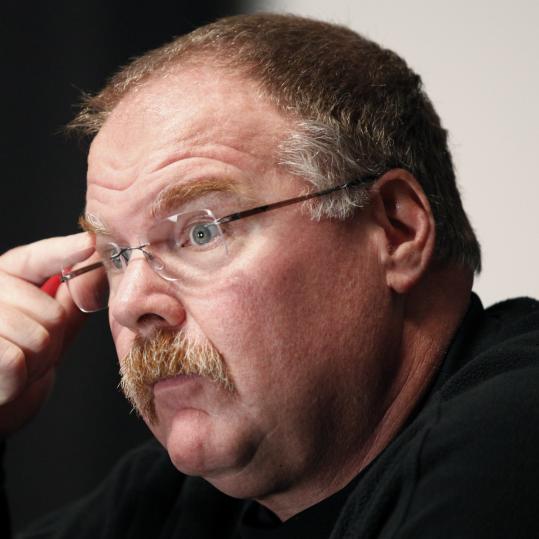 FOXBOROUGH - Given how it worked out for the Miami Heat, who stumbled in the NBA Finals after lofty projections of not just one . . . not just two . . . not just three . . . but many NBA titles, perhaps Vince Young was a bit premature in his preseason proclamation about the Philadelphia Eagles.

Because of the awesome assemblage of talent on both sides of the ball, Young, who was brought aboard this season as a backup to Michael Vick, believed the Eagles were the NFL’s version of “The Dream Team.’’

“I didn’t think anything of it when I first heard it,’’ said cornerback Nnamdi Asomugha in a teleconference yesterday with the New England media. “I just thought it was Vince talking about how he felt and how he was excited and how it was like a dream come true, something like that.

“You learn very quickly how things can get spun. I mean, I think we all got a lesson in that after that statement he made.’’

Young’s remark took on a life of its own. As was the case with Messrs. James, Wade, and Bosh in Miami, the Eagles were perceived to be an arrogant bunch of young turks who felt they were entitled to reach the Super Bowl.

“We knew that expectations were going to be great and it was going to be assumed that we would be undefeated, but we knew there was going to be some work to be done,’’ said Asomugha, one of two Pro Bowl cornerbacks (al ong with Dominique Rodgers-Cromartie) the Eagles added in a splashy free agent haul.

“Everybody was new, everybody was learning, coaches included. We just needed to be real with ourselves, and I think it becomes a bigger issue when you think about what the expectations have been, and rightfully so.

“We try to keep it in perspective between what those expectations have been and what the reality of the situation is.’’

Here’s the reality: Time is running out on “The Dream Team.’’

With six games remaining in the season, the Eagles (4-6) are struggling to reach the .500 mark. They lost four in a row after a season-opening 31-13 romp at St. Louis. Five of their six losses have come by a touchdown or less.

If this continues, the only way the Eagles will make it to Indianapolis for the Super Bowl is by purchasing a group travel package. Tickets and accommodations included.

After snapping a two-game skid with an impressive 17-10 road victory against the NFC East rival Giants last Sunday night, the Eagles will be fighting for their postseason lives when they host the Patriots Sunday afternoon at Lincoln Financial Field.

“It seems like every week in the National Football League is a do-or-die game,’’ said Eagles coach Andy Reid, who has drawn his share of criticism for his team’s underachieving record. “So that’s kind of how you approach it, I think, from a coaching standpoint.’’

Reid brushed off any questions about his evaluation of the season to date.

“You know what? I don’t get into all that,’’ he said. “I think, as coaches, you’re problem solvers. You get in and you try to figure it out and make sure you put the guys in the right position and coach your guys up - that’s kind of what you do. There’s no time to look back or look forward. You get so entrenched in the moment and making sure you get that right.’’

With Vick forced to sit out last week with a rib injury - he also missed practice yesterday - Young got his first start for the Eagles.

Young completed 23 of 36 attempts for 258 yards and a pair of touchdowns but threw three interceptions. He directed an 18-play, 80-yard drive that culminated with an 8-yard toss to Riley Cooper for the go-ahead score with 2:50 to go.

“Probably the main thing I would tell you is that Vince came here under a bit of scrutiny,’’ said Reid, referring to Young’s clashes with Titans coach Jeff Fisher. “I’m also good friends with Jeff Fisher, so I understand the situation that took place there.

“He came here with a little bit of a cloud over his head, but he’s done nothing but work hard, study. He’s doing it the right way. He and Michael have developed a very close relationship.

“I think Michael’s example has been very good for Vince. I think Vince’s attitude has just been unbelievable.’’

While Young certainly meant to convey a message of hope, the hard-edged Philadelphia fans have thrown his “Dream Team’’ label back at him and his teammates.

“Yeah, people are always trying to bring it up or always trying to say something that has the word ‘dream’ in it or something like that,’’ Asomugha said. “You always have to watch what you’re saying, because even if you say, ‘It’s been our dream to be in this situation,’ then someone’s going to run with that.

“That’s been the annoying thing. You just want to be able to speak freely, but as Vince was trying to do, you see how that can be taken the wrong way and put on the shoulders of everybody.’’