No one else to blame

For the Patriots offense, the start and finish to Monday night’s 34-3 victory over the Chiefs at Gillette Stadium couldn’t have been more different.

On the first four drives, the Patriots totaled 18 plays, gained three first downs, and had 25 net yards and zero points.

The natural reaction is to look for some answer for the difference in production.

Chiefs defensive coordinator Romeo Crennel knew how to thwart Tom Brady, but then Brady eventually figured it out.

When Ryan Wendell went in at center after Dan Connolly injured his groin, that’s when everything changed.

See, that’s what happens when somebody takes Wes Welker out of the game. The Patriots have nothing on the outside.

They must have made an adjustment. Maybe one of those vaunted halftime adjustments.

All of that is good to talk about, and gives us writers something to write about, but the truth is often much simpler and boring: The Patriots didn’t execute very well to start the game, but they finished much better.

They were fortunate to be playing a much weaker team in the Chiefs. If the Patriots take the field and execute that way in the playoffs - or even Sunday against the Eagles - they’re going to get bounced faster than a Superball off the blacktop.

Don’t expect Patriots coaches to be showing much of the film after the 7:36 mark of the second quarter against the Chiefs, although there was plenty of subpar play there, too, mixed in with the standout variety.

The start of the game couldn’t have been much worse for the offense, and you know Bill Belichick and his staff will be milking that for all it’s worth.

There is plenty to choose from:

The first three plays set the tone. BenJarvus Green-Ellis dropped a pass on first down. The second-down run went for only 2 yards because Matt Light, Connolly, and Brian Waters all got whipped at the snap. That forced Green-Ellis to make a rare stutter-step because the run lane was so poorly blocked. We know Logan Mankins came to play because he laid a vicious pancake on linebacker Jovan Belcher.

To top it all off on third down, Danny Woodhead and Light blocked the same player, allowing a free inside blitzer at Brady, receiver Chad Ochocinco didn’t see the blitz coming so he did not break off his route to help his quarterback, and as a result, Brady was called for intentional grounding.

That’s not anything the opponent did, those are self-inflicted wounds.

The next drive got off to a better start, with a first down on the second play, and the Patriots were in decent shape with second and 7.

Then there was an error in protection, which led Brady to have to throw off his back foot to no one - even though Waters nearly rescued the play by blocking two rushers himself. The drive ended when Rob Gronkowski dropped the ball on a play that should have picked up a first down.

The next drive was much of the same. The Patriots picked up a first down, and then Brady and Aaron Hernandez weren’t on the same page. And then Hernandez and Nate Solder didn’t hold their run blocks. And finally Woodhead didn’t execute his blitz pickup, and Brady failed to get rid of the ball, was hit, and fumbled.

The fourth drive was even worse. Connolly couldn’t hold the point of attack against backup tackle Amon Gordon, and then allowed a sack by Gordon. Woodhead didn’t pick up a free blitzer as Brady threw low to Hernandez. The final insult was Sebastian Vollmer, against a three-man rush, setting too hard to the outside and getting smoked by Tamba Hali for a sack.

Did you notice there wasn’t much talk about what the Chiefs did? That’s because the Patriots did it to themselves.

They are too talented to perform like that, and they eventually woke up.

If New England tries that against better competition, it won’t be able to dig itself out of the hole.

Here are the positional ratings against the Chiefs:

Quarterback Rating: 3 out of 5

Throwing the ball, this was probably Brady’s most even performance since the Dallas game. He cut back on his questionable throws (three) and had just as many standout throws. Brady did have issues deciphering where to go with the ball because the Chiefs disguised well, were dead-set on taking Welker away, and blitzed Brady more than he has been blitzed all season. Romeo Crennel blitzed Brady on 37.5 percent of his dropbacks, which is the most since the Bears game last season. And 10 of the 12 blitzes came on Brady’s first 15 dropbacks. Three of the 12 quarterback pressures appeared to be on Brady: the sack/fumble, one hurry, and a knockdown. Two of the pressures came after the Patriots had built a lead. Everyone would probably breathe a little easier if Brady just got rid of the ball and let someone else take the pounding. That was a nice run by Brady down to the 3-yard line. He might have had a chance to score if Deion Branch made a block. But Branch was probably distracted by the sight of Brady running. For the record, Brady ran 14 yards in 2.71 seconds. That equates to 7.74 for the 40.

There was some good running out of all three backs, especially Green-Ellis and rookie Shane Vereen in his debut. Of the 145 total yards from the two backs, 54 (37.2) came after first contact. But there were issues in pass protection. Woodhead allowed a hurry and knockdown, and failed to pickup another blitz. Green-Ellis had a knockdown. He also had a rare poor run read on first and 10 with 5:03 left in the half. Mankins had pulled but Green-Ellis couldn’t decide whether to go inside or outside the block on Belcher. Indecision cost him some yards, but so did Solder falling down.

Tight end Rob Gronkowski (two touchdowns) carried the offense, with eight of Brady’s 15 completions for nearly 60 percent of the yardage. On the first touchdown, an effective play-action fake kept Belcher from getting the proper coverage drop, and then safety Kendrick Lewis feebly attempted to bring Gronkowski down - one of several missed tackles by Lewis. Ochocinco didn’t get off to a good start when on the first third down he didn’t break off his route facing a possible - and eventual - blitz. The second touchdown was nicely designed play, with Gronkowski coming in motion against man coverage from a defensive back. Just throw it to the big guy and let them try to bring him down. But there were issues here. Both Gronkowski and Hernandez had drops. When Solder is added to the mix, there were seven poor blocks. Included in that is Taylor Price, who after finally getting on the field had an illegal procedure penalty and failed to block downfield. That’s not going to get him more playing time.

Offensive line Rating: 3 out of 5

After a shaky start, this unit played a better all-around game than it has in a few weeks. And outside of his two penalties - including a dirty, uncalled-for shot after the whistle near the end of the game - this was Mankins’s best performance in weeks. He was back to being his nasty self, and his technique was much cleaner. The Patriots need more of that. Connolly looked gimpy before he left with a groin injury, but Wendell showed much promise in his most extended playing time. There was some really good play from Wendell, including his textbook block against Pro Bowler Derrick Johnson on the Woodhead screen before halftime, and two plays later the execution of a very tough reach block against athletic rookie Allen Bailey. But Wendell also has his struggles. It was a promising start and we would like to see more of him.

Defensive line Rating: 4 out of 5

This is going to go for the entire defense: Nearly universally, they did their jobs. There wasn’t much spectacular play, but there were minimal miscues, and that’s the biggest difference from early in the season. They’re back to where they were last year at this time, which is hold your own and make the other team beat you. Andre Carter continued his high level of play with 2.5 quarterback pressures, two run stuffs, and a pass defensed. He did lose contain on Thomas Jones’s 26-yard run, but that was the lone miscue from this group. Mark Anderson (1.5 sacks, hurry) did what he was supposed to against right tackle Barry Richardson, who has been terrible of late. Vince Wilfork (1.5 run stuffs) and Gerard Warren also played well. Shaun Ellis is officially MIA: He didn’t play despite being active.

Of any group, this is the one that had the most trouble with the Chiefs’ hurry-up and funky looks to start the game. Gary Guyton looked completely lost on the first read-option play with receiver Jerheme Urban at quarterback. Guyton just ran into the back of Wilfork, and Dexter McCluster scooted through the vacated gap for 8 yards. The Patriots played more 3-4. They are truly a hybrid at this point. Rob Ninkovich (sack, two knockdowns) continued his improved play. Jerod Mayo is rounding back into form. The Patriots blitzed just three times, producing three pressures and an interception. They had just nine total pressures, which ties their season low set against Dallas.

Secondary Rating: 4 out of 5

All but one of the team’s five missed tackles came from this unit, but as opposed to earlier in the season, the misses are minimal because players are flying to the ball and helping. Kyle Arrington (two interceptions, pass defensed) is the cornerback play at this point, but the others are holding their own. Other than missing an angle along with Ninkovich on Jones’s 26-yard run, James Ihedigbo was solid and continues to do well in run support. Julian Edelman had a nice run tackle but missed one as well.

Obviously, Edelman’s terrific individual effort on the 72-yard punt return for a touchdown was the highlight. But overall this was a solid effort. Antwaun Molden is carving out a nice role on kick coverage. He had two special teams tackles, along with Niko Koutouvides and Tracy White. Zoltan Mesko was solid with a 4.4-second hang-time average on his four punts. The lone blemish in this group was the 26-yard punt return by Javier Arenas. 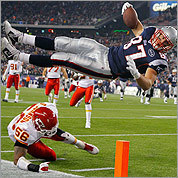