THIS STORY HAS BEEN FORMATTED FOR EASY PRINTING
Patriots 34, Chiefs 3

Patriots get going, roll over Chiefs

FOXBOROUGH - It took them a while to get rolling against the Chiefs last night, but once the Patriots did, there was no stopping them.

Keyed by tight end Rob Gronkowski’s two-touchdown night and two right-place, right-time interceptions by Kyle Arrington, New England routed Kansas City, 34-3, and is tied with Baltimore, Pittsburgh, and Houston for the best record in the AFC at 7-3.

With the Bills and Jets losing in Week 11 and each at 5-5, New England has a two-game lead in the division.

Quarterback Tom Brady was battered in the first half as he went just 8 for 16 for 133 yards, was sacked three times, and was hit on a few other occasions. Not coincidentally, the Patriots were 0 for 5 on third downs in the opening 30 minutes.

Still, they went into halftime with a 10-3 lead, with Gronkowski’s first score of the night providing the bulk of those points. The score came off a play-action pass, and Gronkowski found himself wide open in the middle of the field. Safety Kendrick Lewis was the only player Gronkowski had to beat, and Lewis dived low at the tight end’s legs. Gronkowski was knocked off stride but not out of bounds, and he ran the final 10 yards to the goal line, bending at the waist as though he were a racer crossing the finish line at the end of the 52-yard TD.

Arrington, who now has a league-leading seven picks, set up the Patriots’ second score, his interception and 28-yard return giving New England the ball near midfield. The Patriots got to the Chiefs’ 3 but were unable to convert on third down, and Stephen Gostkowski made a 21-yard chip shot.

“The first half we didn’t do anything,’’ Brady said. “I don’t think it could have gotten much worse than what we did in the first half. But we came out strong in the second half and took control in the third quarter.

Bill Belichick, who finds his team in the driver’s seat to win its ninth AFC East title in his 12 seasons as head coach, didn’t have an answer for why the offense got off to such a slow start.

Kansas City actually held the lead at the end of the first quarter. Aided by a big punt return from Javier Arenas that gave the Chiefs the ball at their 47, they rode their three running backs - Thomas Jones, Jackie Battle, and Dexter McCluster, into the red zone. But the Patriots shut them down, with Andre Carter dropping quarterback Tyler Palko for a 6-yard loss on second down. Two plays later, Ryan Succop converted a 26-yard field goal.

The Patriots pitched a shutout the rest of the way.

However, no sooner was the announcement made that he was questionable to return than did Ihedigbo come back on the field and enter the huddle.

When Ihedigbo went out, Ross Ventrone - who was signed off the practice squad yet again before the game - replaced him, a sign that Sergio Brown is deep in the doghouse.

Julian Edelman took a number of snaps in the team’s nickel and dime packages, showing that his late-game cameo against the Jets was more than a one-time thing. Edelman made a second-quarter third-down stop, forcing the Chiefs to punt.

“I loved him out there running around,’’ linebacker Rob Ninkovich said of Edelman, normally a receiver. “Some of the things that have happened in the secondary, with guys going down and others having to step up, he’s done a great job in taking that role and going out there to do the best he can.’’

The Patriots got the ball to start the third quarter, and that’s when they began to pull away from the Chiefs, who have been incredibly streaky: They began the year with three straight losses, then won four straight, and now have three consecutive losses again, falling to 4-6 in the AFC West.

A screen pass to BenJarvus Green-Ellis on the first snap of the second half went for 25 yards; Green-Ellis also gained 32 rushing yards on the drive, which ended with Gronkowski’s second touchdown. The tight end again took a hard shot to his legs and kept going, but this time he was sent flying, landing hard on his neck and upper back.

He looked woozy for a moment, but executed his now-customary spike. The medical staff took a look at him but deemed him to be OK, and he eventually returned to the game.

“They were just asking me questions like they’ve got to and if I was fine and everything. I was fine. I just got the wind knocked out of me a little bit,’’ Gronkowski said.

Edelman gave the Patriots a 24-3 cushion after the defense forced the Chiefs to go three-and-out, taking Dustin Colquitt’s punt back for a 72-yard touchdown at 9:24 of the third.

A field goal on the final play of the third quarter - after Aaron Hernandez dropped an end-zone pass on third and 1 - increased the lead and Shane Vereen scored from 4 yards out with 1:01 left.

Brady finished 15 for 27 for 234 yards and the offensive line tightened up as well, as he wasn’t sacked in the second half. New England went 4 for 8 on third down in the final 30 minutes.

Kansas City did threaten in the fourth quarter, but Phillip Adams picked off Palko in the end zone to stop the threat when the QB threw into triple coverage. It was Adams’s first career interception.

“You want to be able to help out; just help each other out,’’ the second-year cornerback said. “I just turned my head [and the ball was there]. I played the defense we were supposed to be playing. I’m glad I got it.’’

Palko, a journeyman making his first career start in place of Matt Cassel, was 25 for 38 for 236 yards. He was sacked three times and hit nine times in addition to the three interceptions.

Ihedigbo praised the play of his teammates in the backfield.

“It’s about guys stepping up,’’ he said. “It’s great that we have depth and when key guys go down we can still have a performance like this. My hat’s off to Kyle Arrington and Phillip Adams.

“Our offense is explosive and our goal as a defense is to get them the ball as much as we can.’’ 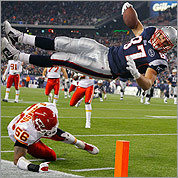