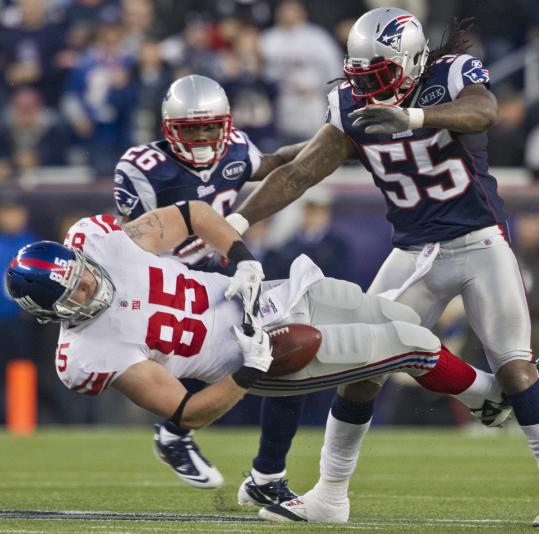 Gronkowski, the second-year tight end, tied his career high with eight receptions for 101 yards, scoring on a 14-yard pass on fourth and 9 with 1:36 to play. He’s already passed his rookie totals with 44 catches and 596 yards.

“It was all or nothing, we needed that play and Tom just happened to look at me,’’ Gronkowski said of his touchdown. “It’s just one of those plays you go over in practice just to get the timing down and he made a nice throw to me and I had to make the play on it.’’

Gronkowski was also targeted on second and third down but couldn’t make the play.

“I definitely had two drops and Tom put them where only I can catch them and I have to be making those plays, but he came to me and he trusted me and came to me the third time and I made the play. But I have to be doing that all game,’’ he said.

Gronkowski and Welker had a quiet first half with seven catches combined. Both got stronger in the second half, combining for 10 grabs. Welker finished with nine receptions for 136 yards, both team highs.

“It was an up-and-down game. We have to execute in the first half and put up points the entire game,’’ Gronkowski said.

Gronkowski has six touchdowns this year and 16 since the start of last season. That leads all tight ends; the Cowboys’ Jason Witten is second with 13.

Chad Ochocinco was targeted five times but came up with zero receptions. He has now gone three games without a catch.

Late in the game, Brady was caught by Fox cameras having a one-sided, animated discussion with Ochocinco on the bench. The image brought back memories of Brady yelling at Joey Galloway on the sideline in 2009; Galloway was released after six games.

But it sounds like Brady is still willing to make this marriage work.

Receiver Julian Edelman was active days after he was arrested for indecent assault and battery after allegedly groping a woman at a Boston nightclub Nov. 1.

During a pregame radio interview, team president Jonathan Kraft said he hasn’t read much about the situation, and that it is difficult to comment while the case is pending.

“He to me is a stand-up guy,’’ Kraft said. “I think the details of this will play out and I shouldn’t say more than that.’’

Edelman was a healthy scratch last week and missed the previous two games with an ankle injury.

Yesterday, he played primarily on special teams, returning five punts for 17 yards. He fumbled a return in the third quarter and the Giants recovered, but they couldn’t capitalize.

Linebacker Brandon Spikes came up with a big hit in the first quarter that drew a big reaction from the crowd, dropping Giants tight end Jake Ballard on a highlight-reel play.

Spikes had a few more strong plays, but left in the third quarter with a knee injury after he collided with Kyle Arrington on a play at the goal line.

Challenges have gone the Patriots’ way this season.

Bill Belichick tossed his challenge flag in the third quarter after Brady’s pass to Aaron Hernandez was ruled incomplete. After review, the call was overturned. However, Brady threw an interception two plays later.

The Patriots have challenged six rulings this season and four have been overturned.

“There is no better feeling, really,’’ Herzlich said of the win. “It is great right now. Coming back to Boston and the Patriots are a great team. We wanted to come out here and be physical and that is what ended up winning the game for us.’’

The Patriots hoped to get receiver Taylor Price more involved but that plan will have to wait another week. Price was added to the injury report Saturday with a hamstring injury and was inactive. The other inactives included running back Kevin Faulk (knee), defensive end Shaun Ellis (rib), linebacker Dane Fletcher (thumb), offensive lineman Donald Thomas, and quarterback Ryan Mallett. Defensive end Jermaine Cunningham, who has just one tackle this season, was a healthy scratch for the second consecutive game . . . Hernandez, who celebrated his 22d birthday yesterday, and Gronkowski have 11 TD catches this season, more than half of Brady’s total of 20.