This time, problems pointed to offense 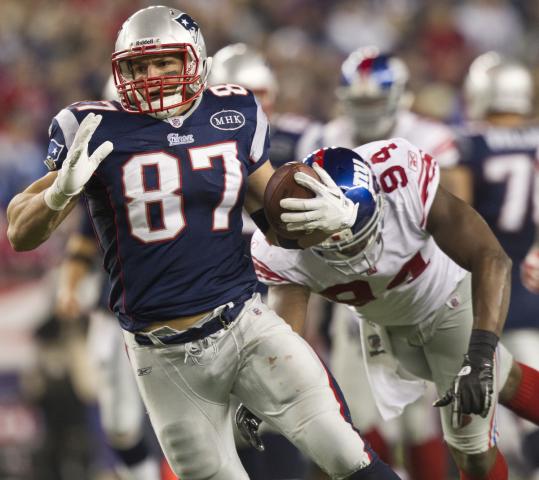 And Tracy White looking like the special teams linebacker he is when Jake Ballard blew by him for the winning score with 15 seconds left, too.

But yesterday’s 24-20 loss to the Giants at Gillette Stadium was not on the defense.

This one was on the offense.

Sure, it made plays when it counted in the fourth quarter.

Terrific. Thanks, Tom Brady and Co., for gracing the 68,756 in attendance with your presence by 6 p.m.

And what the Patriots put together for three quarters on offense was borderline atrocious.

That was the first half.

The Patriots came out so fired up in the second half that they went interception, fumble, punt, and field goal after six plays got them 19 yards following a muffed punt by the Giants.

Give credit to the Giants. They aren’t slouches, not with players such as Justin Tuck, Osi Umenyiora, Chris Canty, Jason Pierre-Paul, and Mathias Kiwanuka.

Those guys get paid to make plays, too.

But so do the Patriots to block correctly, pick the correct running holes, catch passes, find the open receiver and hit him, and don’t turn the ball over.

That is the problem with the Patriots offense right now: a glaring lack of execution.

That the offense struggled against the Jets and Cowboys was one thing. Those teams are talented and know how to run the right scheme to slow the Patriots offense, which actually played well in those hard-fought victories.

The Steelers played exceptionally well last week - even without James Harrison, James Farrior, and LaMarr Woodley (second half) - but for the first time the Patriots didn’t capitalize on some of the plays that were there to be made. Brady missed some throws that he should have completed.

All of that continued against the Giants. And then some.

Everyone’s going to point to personnel for being the problem with the Patriots offense. And certainly their inability to develop a receiver since Deion Branch and David Givens in 2002 - nine years ago! - hasn’t helped.

But the problems are not with personnel on this team, no matter how much some dream at night of adding a “deep threat’’ to this team.

“They’ve got guys,’’ said Giants safety Deon Grant. “Deion [Branch] can stretch you down the field. I’ve played with him, and I’ve played against him. I’ve seen him catch deep balls and score on deep balls. [Wes] Welker, you saw what he did against the Jets and Miami. He got downfield on us. And he can run after the catch. We have respect for all them guys. We don’t cheat when they come in with any particular package. You can’t take anybody for granted when it comes [to] them getting down the football field. Their offense is good. We’ve just got a good defense. They have a good offense.’’

The Patriots aren’t, however, a good offense when they fail to execute. And that has been the problem.

Brady talked about it. So did Welker and Logan Mankins. It’s not just lip service. The players don’t say it just to say something to the media.

Execution is the name of the game, and the Patriots aren’t doing it consistently right now.

Take the first half.

On the first play from scrimmage, the Patriots’ run unit worked to perfection as BenJarvus Green-Ellis ran for 18 yards. Guard Brian Waters took out two players. Center Dan Connolly and left guard Mankins worked a combination block perfectly. Tight end Rob Gronkowski blocked the tackler on the back side. A stiff arm from Green-Ellis added another 5 yards to the run.

On the next play, Connolly didn’t touch linebacker Mathias Kiwanuka and he took down Green-Ellis for no gain.

On a third-down catch that came up 1 yard short of the first down, if Aaron Hernandez sits down in the zone and spins left instead of right after catching the pass, the drive stays alive.

On the next drive, Brady threw a first-down pass into the ground with no pressure around him. Later, Nate Solder didn’t execute a run block correctly and Green-Ellis gained 3 yards instead of 11.

The interception to start the second quarter was a poor decision by Brady.

On the next possession, running back Stevan Ridley ran right when the blocking was to the left. Sebastian Vollmer gave up a hurry to Tuck. Waters got stood up on a run. Gronkowski dropped a pass. Connolly snapped a ball over Brady’s head while Vollmer gave up another pressure.

The next series stalled when the Patriots’ line failed to properly handle a stunt by the Giants.

On the drive before halftime, Brady threw a poor pass to Welker that the receiver miraculously hauled in for a 21-yard gain. Connolly gave up a pressure. And then on third down, the blocking wasn’t good enough for Brady to feel comfortable completing an open pass to Hernandez in the end zone.

Brady opened the second half by underthrowing Gronkowski and being intercepted.

On the next possession, Brady was knocked down when Connolly was beat. And then Matt Light allowed Michael Boley to strip Brady on the fumble.

Those issues aren’t about talent. It’s about doing your job, and the Patriots collectively on offense didn’t do it.

“It’s just a matter of us executing better,’’ Brady said. “It’s one thing here [and] it’s one thing there that keeps us from getting in the end zone. It was just a tough day, obviously, to lose in a game where we felt we had a good plan; we had a good week of practice. They played a little bit better than we did.’’

The Patriots need to find out why the execution has been so poor and get it fixed real quick. They won’t beat the Jets playing like they have the past two games.

The Patriots can start by tossing out these tackle-eligible plays. They aren’t working and they’re screwing up the flow of the offense.

Why the Patriots didn’t spread the Giants out and then run boggles the mind. Why bring more defenders in the box when you have an advantage? Spread them and gash them.

We didn’t even touch on receiver Chad Ochocinco. He looks to be grasping the X’s and O’s of this offense better, but he’s still way behind on the most important concepts in this offense: reading the coverage after the snap and adjusting your route.

It’s obvious Brady doesn’t trust him. Ochocinco was open in the first half but Brady wouldn’t even look at him.

Why should he? When he has space, Ochocinco is taking too long to get out of his breaks. It must be quicker in this precision offense.

And on the play where Brady seemed to overthrow Ochocinco in the red zone, he read it wrong. Ochocinco should have continued to the pylon - like Brady read - but instead he flattened out his route to the sideline.

That’s why you could see Brady expressing his exasperation to Ochocinco on the sideline. These are basic reads in this offense, and Ochocinco is not executing them.

Brady seems about at the end of his Ocho rope.

“We’ve got no other choice but just to keep working at it,’’ Brady said about his rapport with Ochocinco.

No other choice because nobody else is walking into that locker room to fix things in November.

The Patriots have to help themselves by playing better.

The Patriots are struggling because they aren’t doing the little things that lead to properly executed plays.

And that needs to change. Now.