A number done on them: XLII 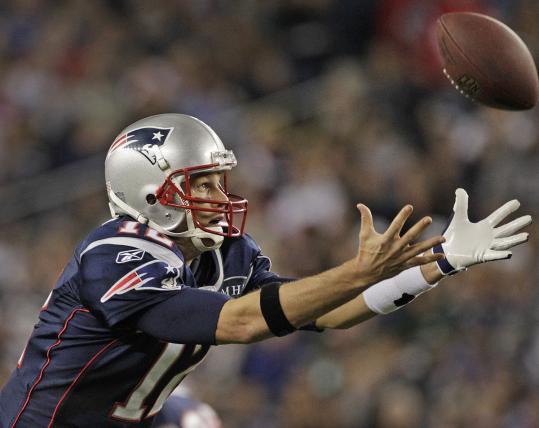 FOXBOROUGH - Spanish-American philosopher George Santayana famously wrote that those who cannot remember the past are condemned to repeat it.

And it was New Jersey philosopher Yogi Berra who told us about “déjà vu, all over again.’’

Welcome to Super Bowl XLII, played at the Razor yesterday . . . yet another close win for the New York Giants over a heavily favored Patriots team.

A lot of the cast members were the same. Bill Belichick, Tom Coughlin, Tom Brady, and Eli Manning all picked up where they left off four years ago in the Roman Numeral Game.

Just like last time we got a hard-fought game with limited offense that loosened up at the finish. The Patriots scored on a touchdown pass to take a 3-point lead late in the fourth, but they left too much time on the clock, and Manning somehow took the Giants down the field for a winning touchdown in the closing seconds. Brady got the ball back for a couple of desperation tosses as the clock wound down to zero.

Yeesh. It was impossible to watch this game unfold without thinking about the day the church bells all were broken in Glendale, Ariz., almost four years ago.

This time we had Jake Ballard playing the part of David Tyree, making a sensational catch over the middle on a huge third down play with 1:07 left in the game.

This time we had rarely used Tracy White (instead of Ellis Hobbs) getting beat on the final touchdown pass (Ballard again).

“There’s obviously a few similarities,’’ said Manning. “[I was just thinking about] the fact that the last time we played we had a two-minute drill to win the game. It was just the same situation here.’’

“No, not really,’’ said the former Boston College coach. “This is a whole new game. Just trying to be in the moment against a really good team and didn’t have a lot of time to think about that kind of stuff.’’

As for Belichick, well, nobody bothered to take Bill down memory lane. The Patriots coach was barely available for anything after this one. Hoodie made a little history when he walked off the field before the clock got to zero in Super Bowl XLII. This time he stayed to the end, then attempted to get in and out of his mandatory postgame news conference before the media assembled to ask him any questions.

“Well, not much to say there,’’ Belichick started, as he stood at the podium in front of a nearly empty room. “This was a tough game. We had our chances, we just came up a little short. (“All-Access’’ Channel 4 should demand a refund for its exclusive “rights’’ to these skull-imploding postgame sessions after losses).

Dour Bill was inches from a clean getaway when a few startled reporters came into the room to find him already winding down. They asked some questions, but the yield was the usual sub-zero refrigerator.

It you want to chalk it up to karma, go ahead.

This is a team that has dedicated its season to the late, saintly Myra Kraft and yesterday they started a punt returner who six days earlier was arrested on a charge of indecent assault and battery of a female patron in a Boston nightclub.

A week ago Julian Edelman (innocent, until proven guilty, remember) was a healthy scratch against the Steelers. So why was it necessary to start him yesterday? Taylor Price’s hamstring? The Giant matchup?

Maybe Edelman had a great week of practice. Or maybe this was just another instance of the old Patriots’ defiance. Football ops is not about to start taking instruction from politically correct namby pambys.

The Patriots still have a pretty easy schedule and look like a lock to make the playoffs (think we said that about the Red Sox, too). But there are legitimate concerns about the Flying Elvises.

Brady was asked about the possibility that the Patriots might lose their “fight.’’

“Look, everyone hates losing, man,’’ he said. “It sucks. You put a lot into each week and it sucks when you lose. But look, no one feels sorry for you.’’

Amen, there. New England’s decade of dominance, the Spygate fallout, and the organization’s abject arrogance has cultivated a nation of Patriot haters. It’s become like rooting against the New York Yankees and corporate greed. When things don’t go well in Foxborough, there’s great glee in football America.

This is one of those times. Things are not going well in Foxborough and Belichick’s army of enemies is ready to pounce. This is Jet Week and you are going to hear a lot about Bill’s spotty drafting, the defection of too many coaches, and New England’s bend-and-break defense. Even Brady (10 interceptions, after only four last season) is suddenly suspect.

It’s going to be a field day for the Patriots Haters as the Patriots get ready to invade the Meadowlands Sunday night.