View not good in front row 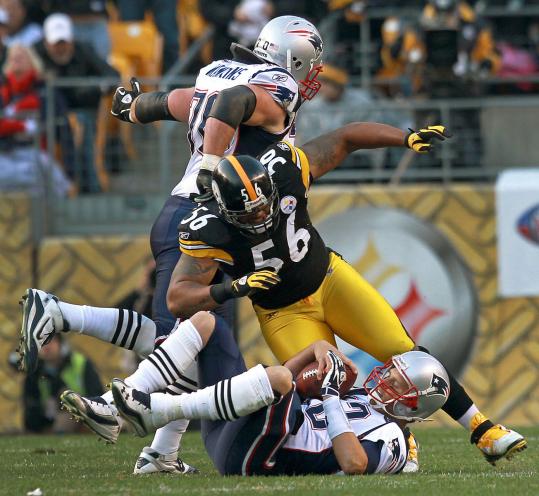 PITTSBURGH - Four false starts, three sacks allowed, and additional pressure on Tom Brady equated to a horrendous game yesterday for the Patriots’ offensive line in a 25-17 loss to the Steelers.

“Just not concentrating enough on our part,’’ said right guard Brian Waters. “And not just on the false starts, but on some of our, I guess, mental errors as far as some of our plays.’’

Right tackle Sebastian Vollmer, who returned after missing four games with a back injury, gave up two sacks, including a strip of Brady that resulted in a safety on the Patriots’ final offensive play.

All-Pro left guard Logan Mankins was no better. He was whistled for two false starts, one that hampered a drive that ended with a Zoltan Mesko punt, the other later in the second quarter on a possession that ended with a 46-yard field goal by Stephen Gostkowski.

There was one bright spot for Vollmer. When Steelers linebacker Chris Carter jumped over the line of scrimmage in the fourth quarter, Vollmer moved, resulting in a neutral-zone infraction. It gave the Patriots first and goal from the 4 with 4:21 remaining. Two plays later, however, Vollmer was called for his second false start. The Patriots still scored to cut their deficit to 23-17, but it was apparent that Vollmer was rusty.

The erratic play was uncharacteristic of an offensive line that is routinely praised for its cohesion and protection of Brady.

“I don’t know if they were doing anything different more than we were hurting ourselves,’’ Waters said. “[We were] just playing really out of character for us. But they did a great job. They were doing a great job as far as rushing hard. Everybody they brought in there, those guys were working hard trying their best to get to the quarterback and also trying to disrupt some of our run stuff. They did a great job trying to put their plan in effect. But we did a lot more things to ourselves than we normally do.’’

It didn’t help that the Steelers possessed the ball for more than 39 minutes, leaving less time for the Patriots’ offense to figure out its opponent.

“It doesn’t take a whole bunch to disrupt an offense, especially when you don’t have a whole bunch of plays,’’ Waters said. “You’ve got to make every one of them count, and today we didn’t do a great job of it up front.’’