THIS STORY HAS BEEN FORMATTED FOR EASY PRINTING
Steelers 25, Patriots 17

Roethlisberger, Pittsburgh offense too much for New England 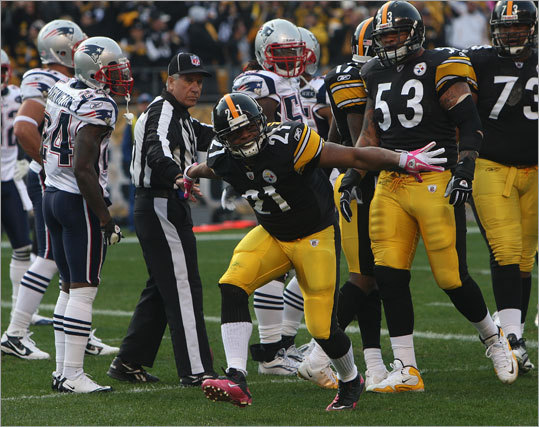 PITTSBURGH – It went right down to the end. The Patriots, despite playing poorly on both sides of the ball, still had a chance to win in the closing seconds against the Steelers on Sunday.

And then, that chance was gone.

With 18 seconds left, quarterback Tom Brady was standing tall, surveying the field, and didn’t see Brett Keisel coming. The veteran defensive end smacked the ball out of Brady’s hand, and in the scrum to get the loose ball, Steelers’ safety Troy Polamalu punched the ball toward the end zone.

It rolled through the back of the end zone, giving Pittsburgh a safety, and setting the final score at 25-17.

Brady threw for fewer than 200 yards, and counterpart Ben Roethlisberger threw for 365 – on 50 pass attempts – in a game that was only close because the Patriots’ defense played well in goal-line situations and forced the Steelers into three field goals.

"I don't think we complemented our defense very well," Brady said. "In the first quarter we had an opportunity to answer their score, and you know, we go three-and-out, so there was too many three-and-outs, there's just a poor level of execution all the way around. Individually, we all have to look in the mirror and figure out what we have to do better."

The loss marked just the third time in Bill Belichick's tenure as Patriots coach – and the first time since 2002 – that the Patriots lost the first game after their bye week.

"It wasn't a real good day for us in any phase of the game," Belichick said.

The Patriots were on the short end of virtually every stat, but most notable was time of possession. The Steelers held the ball 39 minutes, 22 seconds. The Patriots had it 20:38.

Despite the difference, Brady pulled the Patriots within six, 23-17, with a touchdown pass to Aaron Hernandez with 2:40 remaining.

"We never really played the game on our terms," Brady said.

But the Patriots botched an onside kick attempt -- they had an offside and an illegal touching penalty -- that gave the Steelers the ball and good field position.

"We had confidence in the play, thought we would execute it well. Obviously didn't work out that way," Belichick said.

The defense held and forced a punt, setting up the final Patriots play with 18 seconds left.

"We never really played with the lead, we never really played the game on our terms," Brady said. "I think they played very well defensively, they have a lot of good players over there, great scheme, great coaching. We understand if we play like that we're not going to beat many people at all."

With Leigh Bodden released earlier in the week, Ras-I Dowling placed on injured reserve on Saturday, and Josh Barrett out with a lingering thumb injury, the Patriots were perilously thin in the secondary – and the Steelers took advantage.

Pittsburgh’s first drive went 11 plays, and nine of them were passes – including four completions to tight end Heath Miller, whom the Pats had no answer for. Two of Miller’s four receptions were third-down conversions, the second a 15-yard gain on third-and-11 to give the Steelers a fresh set of downs from the New England 8.

The Steelers got on the scoreboard with another third-down conversion, with Roethlisberger throwing a quick pass to running back Mewelde Moore, who fought to get over the goal line for the touchdown and a 7-0 lead.

The Patriots went three-and-out on their first possession, unable to convert on their third-and-3 opportunity.

Pittsburgh took a 10-point lead before New England scored. The Steelers moved easily to the Patriots’ 9-yard line, though the defense was stout inside the 10. On first down, Roethlisberger had to throw the ball away when he was chased out of the pocket. On second down, Patrick Chung broke up a pass in the end zone, and Vince Wilfork got the sack when Andre Carter and Mark Anderson made Roethlisberger scramble on third down.

They settled for a 33-yard field goal on the first play of the second quarter. It was the first time this season New England has not scored in the opening quarter of a game.

New England moved the ball on its second drive, but Brady was sacked on third-and-long by fellow Michigan product LaMarr Woodley, forcing a punt.

However, the offense got a big assist from Gary Guyton when Roethlisberger essentially threw the ball right to him early in the Steelers’ next possession. Guyton returned the ball to the eight, and two plays later the Patriots had their first touchdown.

Kevin Faulk – who not only played in his first game since tearing his ACL against the Jets just over 13 months ago, but started at running back – had a hand in both plays. He picked up six yards on first down, then picked up the safety blitz from Ryan Mundy, giving Brady the time needed to find Deion Branch in the left corner of the end zone.

But any momentum gained by the turnover and quick score was quickly lost – on the Steelers’ next offensive play, they picked up 26 yards on a play-action sideline pass to Emmanuel Sanders. Safety James Ihedigbo slipped and fell just as the ball came to Sanders, and he was effectively taken out of the play.

Just that fast, the Steelers were back at midfield. It took nine plays, but they posted another touchdown when Roethlisberger got lots of time from his patchwork offensive line and found Antonio Brown near the goal line.

Brown fell over the line for the score and a 17-7 lead.

New England kicked a field goal before halftime and went into the locker room down 17-10 and got the ball to start the third quarter.

But they once again went three-and-out on that initial drive.

Pittsburgh, meanwhile, had a 14-play, 70-yard possession that ended in a field goal by Shaun Suisham – the second time the Pats’ defense forced the Steelers to go for three after they had gotten inside the 10.

The 21 yard kick gave the Steelers a 20-10 lead early in the third quarter.

Brady cut the lead to 23-17 with a one-yard touchdown pass to Hernandez with less than three minutes remaining. The score finished a 10-play, 66-yard drive.

The Steelers made the final score 25-17 when Brady was stripped and the ball went through the back of the end zone for a safety.