More work to do for Haynesworth

He believes he can reclaim vintage form 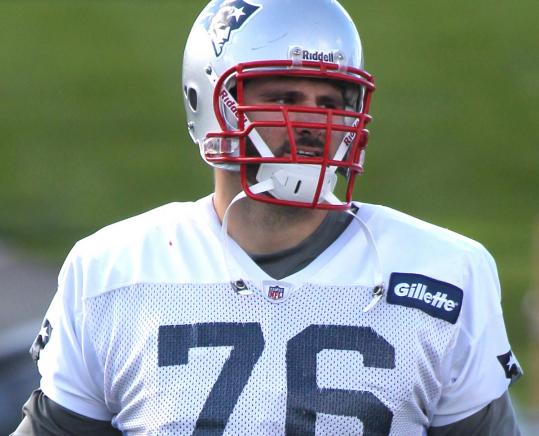 FOXBOROUGH - The progress of Albert Haynesworth has been incremental. The Patriots defensive lineman has not recorded a tackle since Week 1 against the Dolphins, has missed two games with back issues, and has not made the expected impact since the Patriots acquired him from the Redskins.

As midseason arrives, however, Haynesworth is seeking to re-emerge as the dominating force he was earlier in his career.

“I feel fine, I just gotta keep working and get that rust off and get back to that form I was in Tennessee,’’ he said before yesterday’s practice. “I think we’re OK [as a defensive line]. Were on the up-and-up. I think we need to get better but I think we’re headed that way.’’

Haynesworth was asked about the additions of Ron Brace and Brandon Deaderick from the physically unable to perform list.

“They can help us,’’ he said. “I watched film of them last year and they really can play. They’re strong, powerful young guys who can play the game.’’

The Patriots face the Steelers Sunday, and Haynesworth has faced mammoth Pittsburgh quarterback Ben Roethlisberger twice in his career. The Steelers, after getting pounded by the Ravens in Week 1, have won five of six, including three in a row.

“They’re a good team,’’ Haynesworth said. “They’re a strong team. This is definitely a top team, so this is a measuring stick for us to see how good we are and how good we can play.’’

And he had nothing but respect for Roethlisberger, who has passed for 1,937 yards and 12 touchdowns this season.

“Even if you hit [Roethlisberger] it doesn’t mean you are going to take him down,’’ he said. “He’s a guy that could break a lot of tackles and get away from the rush. Even if you are hitting him and he’s going down, he still can throw the ball. With him, you definitely have to emphasize finishing the rush and finishing the tackle because he can still get away.

“He’s still a very good quarterback, a great quarterback. The guy’s won a lot of Super Bowls and he’s played a lot of football. So that makes him even more dangerous.’’

Tom Brady touched on a variety of subjects during his contractually obligated appearance on WEEI, including teammate Rob Gronkowski posing for a picture with an adult film star.

The second-year tight end is gaining a reputation as a fun-loving guy off the field.

“He never ceases to amaze me,’’ Brady said. “I would have guessed there’d be pictures of him somehow with his shirt off or posing or something like that.

“I’m just glad I’m no longer the one that people are making fun of on my team on a daily basis. Gronk has definitely pulled into the lead there.’’

Asked whether he thought team officials would speak to Gronkowski, Brady said, “Yeah, and Gronk, he’s single and he’s young and he’s making his own decisions. He’s used to that walk into that coach’s office now. He probably already knows it’s coming.’’

“They’re very different players,’’ he said. “Troy is a phenomenal player. I watched a bunch of his highlights with coach [Bill] Belichick yesterday in our film study. He’s as good as he’s ever been.

“He flies around the field. He’s incredibly fast and instinctive. He covers a lot of ground out there. You have to keep your eyes on him on every play.

“I’d say he’s more comparable to [Ravens safety] Ed Reed than Revis. Revis, they put him on a receiver and he takes him out of the game and he does a hell of job of doing that. [Troy] makes plays that very few guys in the league can make.’’

Offensive lineman Marcus Cannon made his debut yesterday after being removed from the reserve/non-football injury list. A fifth-round pick in June, Cannon was diagnosed with non-Hodgkin’s lymphoma earlier this year. He underwent chemotherapy before being cleared to return to football. The Patriots will have three weeks to make a decision on his roster status . . . Sebastian Vollmer has been beset by back woes most of the season, but the third-year offensive tackle is optimistic about his progress. Vollmer suited up against the Chargers Sept. 18 but missed the next four games. He returned to practice two weeks ago as the Patriots were preparing for the Cowboys. Vollmer was limited in all three practices that week, but said yesterday he is improving. “Trying to get back and do what you can and just contribute somehow,’’ Vollmer said. As for playing against the Steelers, Vollmer said he is “always hoping. We’ll see how it goes.’’

Linebacker Dane Fletcher was missing from practice. Brady, left tackle Matt Light, and cornerback Ras-I Dowling all returned. The team practiced in sweats and shells on the lower field behind Gillette Stadium . . . Five players were selected as practice players of the week: cornerback Antwaun Molden, offensive lineman Ryan Wendell, defensive lineman Alex Silvestro, offensive lineman Thomas Welch, and offensive lineman Matt Kopa . . . Deaderick said he was unsure whether he would be active against the Steelers. “I’ve got a lot of ground to make up,’’ he said. “It’s a lot of time, but I’m up for the challenge.’’

Monique Walker of the Globe staff contributed to this report. Gary Washburn can be reached at gwashburn@globe.com. You can follow him on Twitter at @gwashburn14