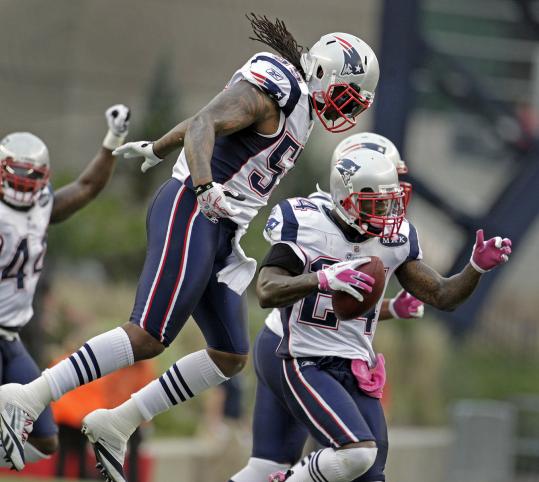 FOXBOROUGH - Patriots linebacker Brandon Spikes isn’t hard to spot on the field. After a play, he is the guy hopping around while his dreads flop against his helmet.

After a tackle or big play, Spikes celebrates, and it doesn’t matter if the play results in a loss of yards or a small gain. Spikes, who is in his second season in the NFL, can’t help himself.

“I want to be exemplary, play hard and relentless,’’ he said. “I want to be energetic and be electric. I think it’s fun to watch. I guess people are noticing it, but I always played like this [at the University of Florida], and it’s just contagious.

“You turn on the film and see guys flying around having fun, playing the game we’ve loved ever since we were young. I know they say it’s a job now, but for me it’s the same old job. I’m living the dream and having the time of my life.’’

The season may seem like it’s just beginning for Spikes, and in some ways it is. He suffered an ankle injury during training camp and didn’t play in any of the exhibition games. His absence during the preseason sparked questions about his standing with the team, but the Patriots didn’t hesitate to publicly support him.

Progress has been gradual for Spikes, but he reached another level last week when he was part of a big play at the end of the Cowboys game that helped give New England’s offense the opportunity to orchestrate a 20-16 victory.

With the score tied at 13 and a little less than six minutes to go, Patriots tackle Vince Wilfork sniffed out a play and alerted the rest of the defense. Spikes picked up Wilfork’s alert and pounced on Dallas running back Tashard Choice seconds after a shovel pass for a 3-yard loss. The Cowboys settled for a 26-yard field goal.

The defense came up with another stop and gave the offense the ball back with 2:31 to go. Quarterback Tom Brady went 8 for 9 on a final 80-yard touchdown drive that gave New England the victory. The Patriots had their bye yesterday and are at Pittsburgh Oct. 30.

Spikes played a career-high 67 snaps in the win against Dallas, which boosted the Patriots’ record to 5-1. He had eight tackles, one quarterback hit, and plenty of chances to display his excitement after those plays.

“Brandon’s got a lot of energy,’’ Ninkovich said. “He’s fun to play with. It’s entertaining, really, because he’s out there having fun and that’s what it’s all about. I enjoy playing next to him because he’s going to be flying around and giving me his all. And everybody else who’s out there, we want to do the same for him - we’re going to go out there and give it our all.’’

While Spikes was hurt during camp, he was trying to learn as much as he could as the Patriots shifted from a 3-4 defense to a 4-3. The injury was a disappointment for Spikes, who was drafted in the second round in 2010.

Getting back on the field was a priority for Spikes, who was suspended the final four games of his rookie season when he tested positive for a substance found in a prescribed medication that violated NFL policy.

Spikes was inactive for the season opener against Miami. He made his season debut in Week 2 as a sub. But he has started the last four games.

“I think Brandon has been improving a little bit every week - increased his practice reps and his playing time,’’ coach Bill Belichick said. “He really missed the entire preseason and he missed the Miami game, so his preseason is kind of coming to a close right now, I’d say, in terms of timing and practices. He’s getting better and he made some plays for us on the next-to-last possession defensively [against the Cowboys]. When they were trying to run the clock, he blitzed up the middle a couple times and was disruptive, and we were able to get the runner for little or no gain. He showed up on a few plays.’’

Spikes said he notices the difference in his comfort level now.

“I missed a significant amount of time,’’ he said. “With football, you got to get a feel for it. You keep coming with repetition day by day. I was definitely behind, but now I think I’m kind of getting upbeat and I’m in top shape. I feel like I’m taking it all in with the defense. I just want to keep getting better every day.’’

Being a disruption on the field is Spikes’s goal. In watching old film, Spikes noticed the effort of Hall of Fame linebackers Lawrence Taylor and Dick Butkus.

“Just watching some of the older, great linebackers play, I just try to mold my game like them,’’ Spikes said. “You could tell when they hit a guy, that guy got up and he knew. He didn’t have to look around and see who it was. He knew who it was.’’

Spikes said he is doing all he can to contribute.

“I always feel like no one ever stays the same - you’re either getting better or getting worse,’’ he said. “Whenever my number is called I’m going to come in and try to be productive. My teammates see it and people see it. It’s just being accountable.’’