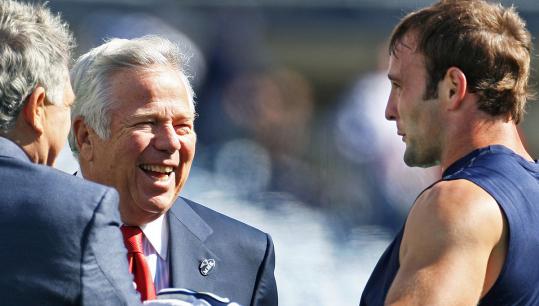 With Patriots players scattered around the country enjoying their bye week, team owner Robert Kraft was the one on the receiving end of questions yesterday, making radio appearances to discuss Patriots-related topics.

Of particular interest to New England fans were Kraft’s opinions on Wes Welker, who is in the final year of the five-year deal he signed in 2007.

Kraft assured that he’d like the receiver - who leads the NFL with 51 receptions - to remain in a Patriots uniform.

“He’s just a special guy. He’s a phenomenon and it’s our hope that he will be someone that will be with us for the rest of his career,’’ Kraft said on WEEI. “You know that we’re a team that’s not about trying to encourage and find people that want the last dollar, and that [if] money is the most important thing then we’ll have trouble trying to get a deal done.’’

Kraft also stressed that as the team has done with other players, it won’t overpay.

“I just want to say this: Whether it’s Wes Welker, Tom Brady, Logan Mankins, or any player - when we decide what our limit is of what we can afford to pay a player, it’s not like whatever we don’t pay to that player the Kraft family is putting in our pockets,’’ he said. “It’s about trying to build a team and have certain disciplines and know that you need a team of 53 players on your roster. So whatever money we don’t give to Wes Welker is going to go to other players to build a team.

Kraft was asked about coach Bill Belichick as it pertains to a coach’s “shelf life’’ with a team. Red Sox owner John Henry used that term following his team parting ways with manager Terry Francona, essentially saying he believes there is a limit to how long a coach can remain with a team and still be effective.

“We’re privileged to have a coach who’s pretty good and I’d like to try to help him have as long a shelf life as he can have,’’ Kraft said. “Being an NFL head coach is a grueling job for six months of the year and you need someone who understands what’s involved. It’s hard for the general public [to understand] the hours they put in.

“Having stability in this business, when you have a certain modicum of success, it’s hard to maintain, because there are forces pulling it apart and I think it’s ownership’s responsibility to do the best we can to solve it. I think Bill loves coaching and we love having him here and we’re trying to always facilitate to keep his shelf life energetic, fresh, and hungry.’’

As to the Patriots’ play on the field, Kraft believes the way they won against Dallas last Sunday was a big boost for the players.

“I think the best part of the last game is that we did come from behind and we did what we had to do, which is what we did for many years,’’ Kraft said. “I think a lot of people had questioned whether that was still there, but I think this last victory, in the form they did it, gave the team a great deal of confidence.

“It’s very important when a team goes off the field that no matter what happens - bad things happen, you get behind - that they always believe they can come back. I sense that feeling might have been a little ambivalent for a little while, but after this last game and going into the bye, I think there’s a great deal of confidence.’’