Jets' Burress is catching up to redemption 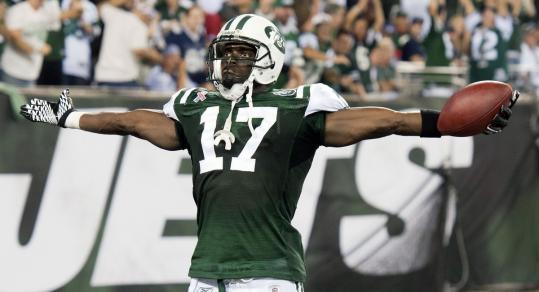 Wide receiver Plaxico Burress celebrated his return to football with a touchdown catch in the Jets’ season-opening win over the Cowboys. (Ray Stubblebine/Reuters)
By Julian Benbow Globe Staff / October 7, 2011

FLORHAM PARK, N.J. - The thought was unsettling. The number was so large, the time frame so small. In one weekend, Labor Day weekend, there were 48 shootings in New York. Two police officers were struck. A 56-year-old woman, minding her own business on a Brooklyn stoop, was killed as she sat next to her daughter, one of three deaths.

Plaxico Burress had his own thoughts. In 2008, he had unintentionally become the poster child for gun laws in New York, one of the strictest states on the purchase, possession, and carrying of handguns.

The night in November of that year when he decided to leave his home in New Jersey to go to a nightclub in Manhattan - accidentally shooting himself in the leg and eventually landing in jail - derailed his career at its apex. Nine months earlier, he had caught the touchdown pass that won Super Bowl XLII for the Giants over the Patriots . He then signed a five-year, $35 million contract extension. He had a son.

Bloomberg said it would have been a mockery of the law not to punish Burress to the fullest extent. Burress served 20 months in prison. He has changed, it would have been impossible not to. He has written about how little he understood or valued the things he had at the time, about how much he lost - not just in money but in time.

“A lot of the things that are going on are just senseless,’’ he said yesterday. “To have 48 shootings in one weekend - during a 48-hour time span - it’s crazy. I was just trying to bring some knowledge to it and how things like that continue to tear our communities down.

“Lives are lost over things that really aren’t important. I wanted to get people to understand the value of life and self-worth.’’

Burress is a football player again. Released from Rikers Island in July, he remains in New York, no longer a Giant but a Jet. He’s returned to a world where winning is the fastest road to personal redemption, and the two touchdown passes he’s caught this season have made the process easier.

The Jets signed him for $3.017 million, far from a superstar’s pay. He is adjusting to no longer being the primary target, instead one of the many options at quarterback Mark Sanchez’s disposal. But thinking back to when he was in prison, football was the furthest thing from his mind.

“At the time, football wasn’t important,’’ he said.

When Burress faced a Manhattan grand jury in July 2009, he said he wanted to show that he was remorseful, and as someone who shot himself in the leg with the gun that he brought to a nightclub to protect himself, obviously fallible.

The fallible part was the only thing that stuck. Shooting himself in the leg made him the easiest punchline.

Burress tuned it out.

“As far as scrutiny or criticism or whatever, what’s been said about me, I can’t do no worse. That’s the way I look at it. So I just keep on moving.’’

Burress was 32 when his sentence started. Some wondered if he would be able to continue his career after serving his time. He worked out in prison, playing football occasionally.

The Jets were one of four teams to reach out to Burress, along with the Giants, Steelers , and Eagles. Bill Belichick said the Patriots did their due diligence, but Burress said, “I never heard from them personally.’’

He’s had to make some adjustments, a new system, new coach, and new quarterback.

But in the locker room, he’s blended in well.

“His attitude has been perfect,’’ Sanchez said. “Just what we needed.’’

In 2007, his last full season, he caught 70 balls for the Giants. With Santonio Holmes, Dustin Keller, and Derrick Mason, those numbers won’t be the same with the Jets.

Burress looks at it as a 16-game marathon with a nuanced learning curve.

“We’re just working at it every day,’’ he said. “It’s something that’s obviously not going to happen overnight. Some of these looks that we’re getting in the games, it’s the first time we’re ever seeing them.

“We call plays and we expect to get certain defenses, but in the game you get a total opposite look. But that’s just part of being a professional. Part of being a quarterback and a wide receiver in this league, you make adjustments on the fly, and it’ll come.’’

Pro sports is an arena that welcomes redemption.

Michael Vick became a walking monument for contrition, paying his debt to society for dogfighting charges with a 23-month prison sentence, then paying his debt to public opinion by waiting humbly and patiently until the moment came to show again he could still play football.

Part of his comeback, though, was a willingness to tell people what lessons his mistakes taught him. Burress has said he intends to do the same.

He’s reached out to a high school in Harlem promising to recognize the top 17 students each quarter by giving them No. 17 Jets jerseys. He said he plans to donate 17 computers to the school in November.

“I’m just doing different things as far as education and gun violence,’’ he said. “Just trying to serve a broader purpose, reaching out to help the youth in urban communities. Just give them an equal, fighting chance.’’