He was paving the way 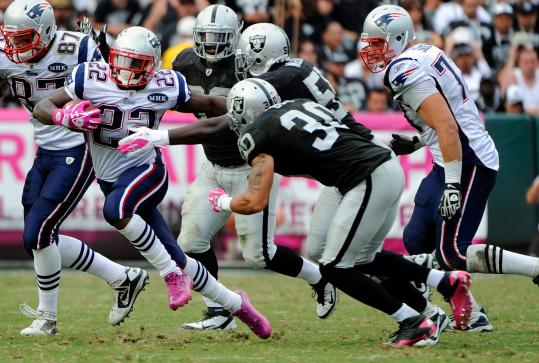 Running back Stevan Ridley (22) had holes to run through thanks to the blocking of tight end Rob Gronkowski (87). (Thearon W. Henderson/Getty Images)
By Greg A. Bedard Globe Staff / October 5, 2011

You could almost hear the groans of fantasy football players during the Patriots’ 31-19 victory over the Raiders Sunday.

Rob Gronkowski had only one catch for 15 yards on five targeted passes?

Either the Raiders did something to limit Gronkowski’s impact, or he and quarterback Tom Brady just weren’t on the same page.

The Raiders didn’t do anything against Gronkowski - or Wes Welker, for that matter - that he and the Patriots haven’t seen before.

The Patriots just had other plans for Gronkowski. And they were just as important, if not more so, to the team’s victory.

In many ways, this could have been Gronkowski’s finest performance in his 20-game career, and could serve as a prime example why he should garner Pro Bowl and All-Pro consideration at the end of the season.

The Patriots entered Sunday’s game knowing they could run on the Raiders, especially on the outside, and they set out to do exactly that. And Gronkowski was the key player.

It’s not that the offensive line needed much help; the Raiders blitzed just eight times, producing one of their 11 quarterback pressures.

Keeping Gronkowski in more kept the Raiders guessing whether it would be run or pass.

While the entire run-blocking deserves accolades, Gronkowski stood out, because the ground-based game plan centered on him.

The Patriots basically ran two running plays: the outside zone stretch, where the running back runs parallel to the line, then cuts back through a hole; and an inside zone where Gronkowski would come down and deliver a “wham’’ block on an interior lineman.

More often than not, Gronkowski was asked to make the key block.

On the outside zone, the running back is reading the block of Gronkowski. On the inside zone, Gronkowski must halt a much heavier and stronger player.

If Gronkowski failed to execute, the ground game would have gone nowhere.

Against the Raiders, Gronkowski was nearly flawless, as Patriots running backs ran for a season-high 185 yards and two touchdowns on 28 carries.

We counted nine standout blocks by Gronkowski, including two “pancakes.’’

Not surprisingly, he was a key figure on six of the Patriots’ seven runs over 10 yards.

Gronkowski put linebacker Quentin Groves on his back on Stevan Ridley’s touchdown.

On Ridley’s 25-yard run to start the second quarter, Gronkowski sealed the edge by driving outside linebacker Kamerion Wimbley down the field and out of the play, at one point with just one arm.

On BenJarvus Green-Ellis’s 15-yard run near the end of the third quarter, Gronkowski wham-blocked end Lamarr Houston to open a crease.

On Ridley’s 15-yard direct snap in the first quarter, if Gronkowski doesn’t execute his block on Groves, the run goes nowhere.

On Danny Woodhead’s 12-yard run before the two-minute warning in the first half, Gronkowski took out safety Tyvon Branch, who was playing up specifically for run support and was supposed to make that tackle.

And on Green-Ellis’s 11-yard run with 9:03 left in the second quarter, Gronkowski whammed nose tackle Desmond Bryant out of the running hole.

Did we mention that on Gronkowski’s one catch, he was hit after 6 yards but dragged the defender another 9?

Or that Gronkowski continues to block on kickoff returns (six against the Raiders)?

There are plenty of young, trendy tight ends in the NFL. Jermichael Finley of the Packers and Jimmy Graham of the Saints come to mind. But not many can hold a candle to Gronkowski in blocking, which makes him one of the more complete tight ends in the game.

He’s soon to get Pro Bowl and All-Pro consideration, and a day like Sunday against the Raiders, when he caught just one ball but did so much more, is a prime example of why.

The positional ratings against the Raiders:

This won’t match up with the output, either, but Tom Brady was just as good. He completed 53.3 percent of his passes for 226 yards after completing 69.9 percent for 1,327 yards in his first three games. Why? Again, because of game plan. This one had a much higher degree of difficulty. Brady threw out of the shotgun just 16 times in his 34 dropbacks (47 percent), and seven came on the two-minute drill before halftime. In the first three games, just 14 of Brady’s 127 passes (11 percent) were thrown longer than 20 yards. Against the Raiders, that nearly tripled. In Brady’s 32 total attempts outside of goal line situations, he attempted 10 passes over 20 yards (31.3 percent). Of his 14 incompletions, just four were unforced errors, including two where he failed to get on top of the ball. The Patriots also used play-action on 38 percent. On the touchdown to Deion Branch, Brady faked a screen pass, faked a handoff, pivoted, and delivered a strike all in 2.20 seconds. That was impressive. Brady also audibled out of at least two bad run plays, including Wes Welker’s 15-yard touchdown in the first quarter.

Stevan Ridley’s breakout game - 97 yards and a touchdown on 10 carries - garnered a lot of attention, and it should have. He broke three tackles and had an impressive 49 yards after contact. Ridley also was good in pass protection (he flipped Groves on Welker’s opening touchdown). But don’t count on him taking BenJarvus Green-Ellis’s reps. Green-Ellis’s 75 yards on 16 carries were just as impressive, if not as flashy. Green-Ellis broke five tackles for 20 additional hard-earned yards, including the arm tackle of 6-foot-7-inch, 335-pound Raiders veteran tackle John Henderson on the 1-yard touchdown plunge. On a key third-and-1 on the opening drive of the third quarter, cornerback Stanford Routt came free to take down Green-Ellis for a loss. But Green-Ellis beat Routt to the corner and leapt over another player to convert. On the next play, Ridley scored. Green-Ellis also stood out on pass protection.

You could look at Matthew Slater (21 snaps) and Julian Edelman (17) playing just as many snaps as Chad Ochocinco (18) and conclude that Ochocinco is losing playing time. We’re actually more buoyed by what Ochocinco did in this game. There seems to be an individual install going on with him. Each week, he is being asked to concentrate on one package. Against the Raiders, it was the two-minute shotgun offense, where 13 of his snaps came. This is a smart move by the Patriots. You can see him playing faster, he showed good timing on Welker’s pick-play touchdown, and he should have had three catches, but one was called back by penalty. Ochocinco is making progress. Slater is the best blocking receiver, and Edelman plays a different position - inside, taking up some of Aaron Hernandez’s slack. The Patriots need Taylor Price back to take more of Branch’s snaps as the “Z’’ receiver. Branch was a complete nonfactor when asked to go vertical. He needs to be kept inside where his short-area quickness is still good.

The unit did very good work against the run, and was decent in pass blocking against an Oakland defense that blitzed only eight times. The line did get help with an extra blocker on 13 of 34 dropbacks (38.2 percent), which made the season-high six knockdowns of Brady a little troubling. Left tackle Matt Light allowed 2.5 quarterback pressures, which is about his average, and right tackle Nate Solder had 1.5 with two run stuffs allowed (plays 1 yard or less outside short yardage). Light stood out in the run game and is still excellent at getting to the second level. Most of the time, the Patriots doubled defensive tackle Tommy Kelly, and allowed left guard Logan Mankins to go one-on-one with Richard Seymour. Mankins delivered: He allowed just one half knockdown and two run stuffs. After pitching a shutout last week, center Dan Connolly allowed two pressures. The experiment with Thomas Welch as an extra tight end was a mixed bag with two standout run blocks, but also 1.5 pressures allowed.

Andre Carter (49 of 70 snaps) had a standout game with 2.5 quarterback hurries and 1.5 knockdowns for four total quarterback pressures, and two stuffed runs. The defense had 12 total quarterback pressures, well up from the five against Buffalo. We counted six holding penalties that could have been called, four against Carter. Gerard Warren brought some movement with two pressures in just 34 snaps, but he did blow the gap on Darren McFadden’s 41-yard run. Of course, Vince Wilfork had the outstanding interception. Shaun Ellis had one pressure, blew contain on Jacoby Ford’s 30-yard run, and was out of his gap another time.

If the Patriots are going to survive Jerod Mayo being out, Brandon Spikes is going to have to play the way he did against the Raiders, but with more consistency. He loomed large by figuring in on three run stuffs, added two other standout tackles, and a quarterback knockdown. Gary Guyton looks slower. He’ll need to read run plays better if he wants to fill for Mayo. Dane Fletcher might be the better choice. Rob Ninkovich wasn’t much of a factor outside of setting the edge well, and had trouble playing zone coverage. Linebackers had two of the defense’s four missed tackles. The Patriots rushed three players more times (seven) than they blitzed (six).

The Patriots need to find answers at safety opposite Patrick Chung. Josh Barrett didn’t play again after Ford’s 30-yard end around. Barrett played on special teams, so he wasn’t hurt - he was likely benched after starting the game. On Ford’s run, Barrett was the safety on that side of the field, ran up in support, and then when he saw Raiders center Samson Satele, he let up and got blocked. He was never seen again. Sergio Brown took two terrible angles on Darrius Heyward-Bey’s 28-yard catch on third down in the second quarter, and then his 58-yard catch on the final drive. Brown has to clean up those plays. Devin McCourty had a good bounce-back game.

SPECIAL TEAMS Rating: 4 out of 5

Other than Stephen Gostkowski kicking the opening kickoff out of bounds, and three players missing tackles on a punt return that was called back by penalty, this group was very good again. Punter Zoltan Mesko (49-yard average) was outstanding, as was Matthew Slater (three tackles), who appears to be unblockable.