A few hits, but a big miss for Ochocinco

ORCHARD PARK, N.Y. - The logical choice for Tom Brady to lean on with tight end Aaron Hernandez (sprained medial collateral ligament) on the shelf yesterday was receiver Chad Ochocinco. After a decent outing in Week 2 against the Chargers, Ochocinco could take another step forward against the Bills.

In warm-ups, Brady and Ochocinco spent several minutes talking and gesturing, and it looked like they were making sure they were on the same page for the day.

Ochocinco got his first start with New England as the offense opened in a three-receiver set, but he didn’t get his first catch until the second quarter. Brady appeared to force the ball to Ochocinco just after halftime and cornerback Leodis McKelvin stepped in front of the receiver to record the second of Brady’s four interceptions.

Ochocinco found a soft spot in the Bills’ zone defense for a 19-yard pickup on the next possession, part of a drive that ended with a 23-yard field goal from Stephen Gostkowski.

But on third down after Buffalo took the lead for the first time, Brady went deep for Ochocinco. He had separation on his defender and the ball was right on the money. But Ochocinco didn’t make the catch.

New England went on to score and tie the game, but the missed play, which would have been his first touchdown with the Patriots, lingered.

“It felt good; mentally, I knew my [stuff],’’ he said. “It got away from me. I gotta come up with everything that comes my way.’’

In a tight spot The Patriots may have been down to one healthy tight end, but Rob Gronkowski makes all the difference in their offense.

Gronkowski caught seven passes for 109 yards and had his second straight game with two touchdowns. He now has 17 catches for 281 yards and five touchdowns in his second season.

Gronkowski’s size (6 feet 7 inches) gives Brady a large target and great red zone weapon. Yesterday Gronkowski snagged a 1-yard pass in the end zone and later caught a 26-yard touchdown as he was running into the end zone. The scores helped the Patriots jump to a 21-0 lead in the first half.

“We just didn’t stay focused I guess,’’ he said. “It’s never too much, too soon. You always want to get off to a fast start, but we’ve got to keep on going and keep on hanging on to that.’’

Tough love Stevie Johnson and Chad Rinehart kissed and made up.

When the Bills were trying to run out the clock to set up the winning field goal, Rinehart, a right guard, was called for a false start with 48 seconds.

In reaction, a spirited Johnson pushed Rinehart in the chest in the huddle.

“We just got into it in the heat of the moment,’’ said Johnson, a fourth-year receiver. “Everything is cool, though.’’

The penalty moved the ball to the New England 9-yard line and Johnson lost his cool for a minute and teammates had to pull him away.

“We got just one play,’’ Johnson said. “Just kneel it. Keep your composure. That’s it. A lot of emotions out there. It’s a big game. Battle of the undefeated.

“On top of that, it’s the New England Patriots. So I felt like, man, come on ya’ll. Look. Look. We got one play. Tempers went on a little bit, but that’s a brother’s fight.’’

Rinehart, a third-year player, understood why Johnson was upset.

“That was one of the dumbest plays I’ve ever had,’’ Rinehart said.

Rinehart was just as mad at himself as Johnson was.

“It wasn’t anything Stevie did,’’ Rinehart said. “I was so upset with myself.

“No issues there. I can’t explain what the hell I was doing there.’’

Cornering market Cornerback Kyle Arrington secured two interceptions for the first time in his career yesterday, ending Buffalo’s first two drives. His first came as Ryan Fitzpatrick’s pass slipped through the hands of Donald Jones and into the arms of Arrington. He returned the interception 27 yards and it led to a touchdown. His second came as the Bills were facing fourth and 14 from the New England 35. Arrington has a team-high three picks on the season . . . Zoltan Mesko, who was limited all week after suffering an injury to his left (kicking) knee against the Chargers, punted three times for an average of 46.7 yards. His longest, a 57-yarder, was also his longest this season. Mesko said he just needed to loosen up the knee and that it helped that it was such a warm day in suburban Buffalo. “It’s just a minor thing,’’ he said. “By next week I should be OK.’’

Jet laggers According to a league source, Jets executives at the team’s game in Oakland cheered when they watched the Patriots lose to Buffalo. Perhaps karma was at work, because New York had its own second-half issues and dropped a 34-24 decision to the Raiders . . . Several Patriots were active for the first time this season, including Ross Ventrone, cornerback Phillip Adams, linebacker Jeff Tarpinian, quarterback Ryan Mallett, and running back Shane Vereen. Only Ventrone and Tarpinian, both promoted off the practice squad last week, got into the game . . . The Patriots inactives: receiver Taylor Price, cornerback Ras-I Dowling, defensive linemen Albert Haynesworth and Mike Wright, safety Patrick Chung, offensive lineman Sebastian Vollmer, and Hernandez. Dowling was a game-time decision, as he came out for warm-ups to test his hip but ultimately wasn’t ready. The other inactives are dealing with injuries as well. 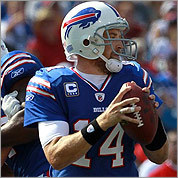