His conditioning may be a problem 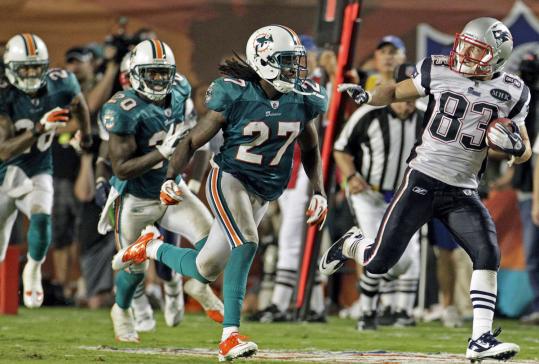 MIAMI GARDENS, Fla. - Under a rule tweak this year, teams can have 46 of their 53 players active on game day. When the Patriots announced Sunday night that five players had been downgraded to out, it left few question marks as to who might be inactive for last night’s opener against the Dolphins.

But when the list came out, there was a bit of a surprise as second-year linebacker Brandon Spikes was a scratch.

Though Spikes missed time during the preseason with an ankle injury, he presumably practiced fully in the days leading up to the game, and was not listed on the injury report.

While using Dane Fletcher may have been a better fit defensively because Spikes lacks quickness and the Dolphins have Reggie Bush, it is also believed that Spikes is out of shape.

It is yet another item to add to a growing list of head-scratching events for Spikes, the third of three second-round draft picks last year.

He has posted messages on his Twitter feed over the past several weeks that call into question his happiness in New England. But at an appearance a couple of weeks ago, Spikes said he has no problems with the team. Interestingly, however, there is no mention of the team he currently plays for on his Twitter page - his picture is often of him in his Florida Gators uniform, and he lists his location as “Hell ON Earth.’’ In his biography, he calls himself a “small fish in a big pond.’’

Spikes was suspended by the NFL for the final four regular-season games of his rookie season after violating the league’s policy on performance-enhancing substances. Though he had started eight consecutive games, by Week 11 he had lost his starting spot. When he came back from his suspension, Bill Belichick said it “looked like he hadn’t practiced in four weeks’’ and Spikes saw limited snaps in the playoff game against the Jets.

It may or may not be a sign of a bigger problem between the linebacker and the team.

Branch in the swing There was some hand-wringing after the Patriots exhibition finale because Deion Branch didn’t catch a single pass in the preseason.

The Patriots had brought in Chad Ochocinco, but he was acquired as a third option, not to replace Branch. But late last week, Branch said he was not concerned at the lack of production. As long as Tom Brady wasn’t worried, he mused, he wasn’t going to worry either.

Last night proved Branch and Brady are still very much on the same page.

Branch had seven catches for 93 yards, three on a third-quarter scoring drive that broke a 14-14 tie and gave the Patriots a lead they would not relinquish.

Brady tried to reward him with a touchdown on the first goal-to-go play, but the official ruled Branch came down out of bounds.

Versatile thinking Fletcher added another role last night. He was inserted at fullback at least twice in the red zone, filling a role that former Patriot Mike Vrabel once owned.

Fletcher, who is in his second season, was at fullback on first and goal from the Miami 1-yard line. On the play, Tom Brady connected with tight end Aaron Hernandez for the touchdown that extended New England’s lead to 28-17.

On the next possession, Brady targeted Fletcher in the end zone but the pass fell incomplete and the Patriots settled for a 20-yard field goal by Stephen Gostkowski.

Always on the run BenJarvus Green-Ellis and Danny Woodhead may make an ideal rushing tandem for another season.

Woodhead had a team-high 69 yards on 14 carries. Green-Ellis had seven carries for 34 yards and a TD.

“We just came out and tried to execute on all ends,’’ Green-Ellis said. “We did a really good job of finishing drives and putting points on the board.’’

Slater on the go The last two weeks may go down as pretty special moments in receiver Matthew Slater’s career. He was selected last week as a captain and last night had his first career catch, a 46-yard reception in the first quarter that was part of a six-play, 78-yard touchdown drive. “I didn’t know how it was going to go,’’ Slater said of getting his first catch. “Obviously it was exciting and special for me and it was great that it came in a wining effort.’’ . . . Temperature at game time was 82 degrees with 73 percent humidity. There was plenty of cramping, though it mostly seemed to be on the Miami sideline. “Heat always plays a factor on both sides of the ball and you could see it [last night],’’ Vince Wilfork said. . . . Ochocinco was a nonfactor last night, catching one pass for 14 yards . . . The Patriots have scored 30 or more points in nine consecutive games, the second longest streak in NFL history. The Rams own the record at 14 games set from 1999-2000 . . . The Patriots have won eight consecutive games on opening day dating to 2004, the longest active streak in the NFL.

Help for the line With tackle Sebastian Vollmer (back) and guard/center Ryan Wendell (calf) out, the Patriots promoted tackle Thomas Welch off the practice squad before the game. Undrafted rookie linebacker Jeff Tarpinian was waived to make room . . . Fergie, a member of the Black Eyed Peas and a minority owner of the Dolphins, sang the Star-Spangled Banner with 400 servicemen and women, police officers, and firefighters on the field with her in honor of 9/11.