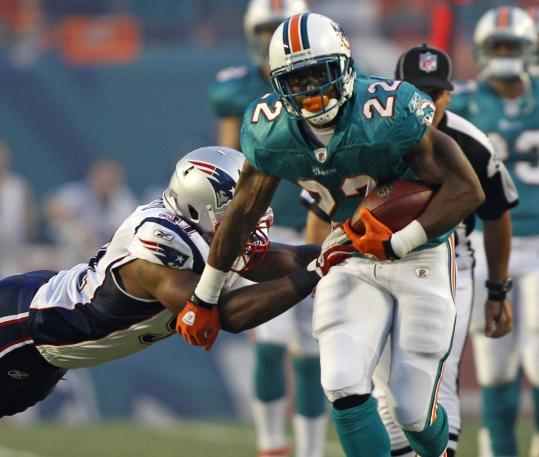 Patriots linebacker Jerod Mayo gets his mitts on Reggie Bush and drags down the Miami running back in the first quarter. (Hans Deryk/Reuters)
By Greg A. Bedard Globe Staff / September 13, 2011

MIAMI GARDENS, Fla. - New defense for the Patriots? Looked like the same old one.

On the first drive.

The Dolphins and quarterback Chad Henne marched 84 yards in 12 plays on a drive that was capped by the plodding Henne running 9 yards for a score on third and goal.

The Patriots were reeling. Bill Belichick gathered the defense and delivered a few words.

“We just had to settle down,’’ said linebacker Rob Ninkovich. “Let the first series jitters out, when you’re looking for everything they can possibly throw at you. I think just getting back in the groove and settling down, that’s [what the message was].’’

Apparently it was received.

The Dolphins wouldn’t score another touchdown on a drive originating in their territory until late in the fourth quarter of the Patriots’ impressive 38-24 victory last night at Sun Life Stadium.

The overall results for the Patriots defense were in the ballpark of impressive, even if the final stat line reads 488 yards allowed, 416 through the air.

The Patriots gave up yards, but most of them were empty. As usual with a Belichick defense, the unit clamped down when needed.

And the kicker: the Dolphins were 2 of 14 on third downs. Fourteen percent is a long ways from the league-worst 47 percent the Patriots allowed last season.

But, in general, what can we take away from the performance?

The unit is a work in progress. They played like there was a lockout and they hadn’t practiced much with a full unit - which they hadn’t.

Through much of the preseason, the Patriots didn’t have linebacker Brandon Spikes, cornerbacks Ras-I Dowling and Leigh Bodden, safety Josh Barrett, and defensive linemen Albert Haynesworth and Mark Anderson because of injury.

“We definitely still have to figure each other out,’’ said linebacker Jerod Mayo. “Just get out there with the group and figure out how each other plays. Playing games is what gets us there. Hopefully we’ll continue to improve throughout the season.’’

There’s obviously still much that even Belichick doesn’t know about this group. He still seems to be evaluating his players.

Must be nice to fiddle around with pieces and still win a road division game with relative ease. Such is the luxury afforded by having No. 12 throwing for 517 yards and four touchdowns out of the box.

There was a constant rotation on the defensive line, which was expected because of the depth in the unit and playing in humid conditions.

Haynesworth made his presence felt, and it was a good beginning. The Dolphins obviously paid him extra attention - and, when they didn’t, he couldn’t be blocked one-on-one. The Patriots didn’t ask too much of Haynesworth, just got his big feet wet.

“I still have a lot of work to do,’’ said Haynesworth, who was credited with two tackles, but had a bigger impact. “But it’s good to get out there and knock all that rust off in the rush and to feel good with this team. With no offseason, it kind of hurt us, so we still need to go out there and work hard this week at practice.’’

The Patriots are going to need to make a bigger role for Myron Pryor because he continued to be tough against the run and the pass. He was tough for the Dolphins to handle with at least three quarterback knockdowns and a stuffed run.

Between Haynesworth, Vince Wilfork, Pryor, and Kyle Love, the Patriots have a strong rotation in the interior.

“You can’t double too many people,’’ Wilfork said of having Haynesworth around. “We have Myron and Love, we had so many people that rotated in and gave us breaks. And they played very, very well. But that’s one of the things we’re going to take advantage of this year. As long as we can stay healthy, that’s one of the things we have working for us.’’

Elsewhere, Belichick played his defenders like he was still looking for the right combination. Dowling, the rookie, started at cornerback in favor of Bodden. But there was a rotation there. There’s little doubt that Devin McCourty, Bodden, and Dowling are the top cornerbacks - their roles, who’s best in the slot, who can be left on an island, are still being sorted out.

“If we put them in there, we’re confident they can play,’’ Belichick said.

Spikes’s continued injury absence will keep the unit from jelling. As a middle linebacker, he’s the key to run fits. Gary Guyton excels at coverage, but he doesn’t read the run as quickly as Spikes.

Without Spikes, one gets the feeling that Mayo is not being as aggressive as he would like. A playmaking role is there for him to star in, but until the right pieces are there, Mayo won’t be turned loose.

“You have to ask Coach Belichick,’’ Mayo said with a laugh. “At this point, it’s getting everybody lined up in the right spot and making sure everybody’s on the same page. That’s my main objective.’’

At safety, the Patriots are looking for the right combination after releasing Brandon Meriweather. Barrett got the start, but Sergio Brown played a lot, often in pass-rushing situations. There could be a platoon with Barrett playing the run thumper and Brown thwarting tight ends down the field.

There was not an abundance of pressure generated by the front four, especially early. Belichick obviously likes what he has seen in practice because the Patriots rarely blitzed.

In the first half the Patriots produced 10 total quarterback pressures, including a hold Haynesworth drew. There were two sacks in the first half, one shared by Mike Wright and Andre Carter, the other by safety Patrick Chung on a rare blitz.

The Patriots added two sacks in the second half for a total of four. They didn’t have to scheme up many of the pressures. The Patriots, as was seen in the preseason, just have more players who can win one-on-one.

That’s the biggest departure from last season, and the reason for the greatest hope on the defensive side of the ball.

“You always have to get the quarterback off his spot, so if you can put some pressure on him it’s going to help out the defense big time,’’ Ninkovich said. “Not bad tonight for the first time out.’’

And just think, Belichick is still tinkering with the weapons he has. The Patriots are far from a finished product.

“I thought it was competitive tonight, but there’s still a lot of things that we need to do better. So that’s obvious,’’ Belichick said. “We have to go back to work. It’s the first game, we have 15 more in the regular season. Hopefully we can improve on a weekly basis. That’s what we need to do. I mean, we’re a long ways from being a good football team.’’

The Patriots posted an easy win on the road in the division while still figuring out how to fit the pieces into the defensive puzzle.

For openers, that’s not a bad start.