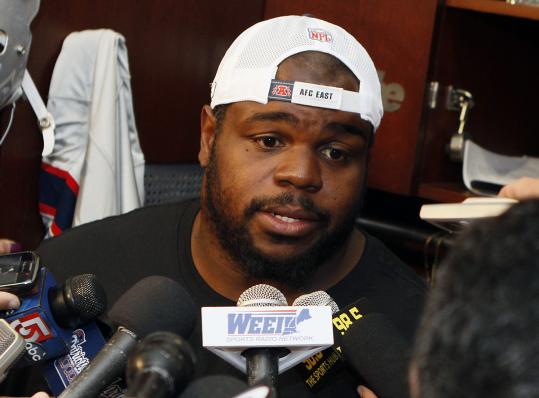 Vince Wilfork would prefer to talk about the Patriots season, not the Miami scandal in which he’s been named as a beneficiary. (Robert E. Klein/For The Globe)
By Shalise Manza Young Globe Staff / August 23, 2011

FOXBOROUGH - After being prominently named in a Sports story as a beneficiary of former University of Miami booster Nevin Shapiro, the Patriots’ Vince Wilfork took to Twitter to give a short statement and thank fans for their continued support.

Yesterday, the defensive tackle met with reporters at his locker and mostly talked about the development of the Patriots’ defense. But he was asked how the last week or so has been since the story was published.

“It’s tough, but you know what - I released a statement a couple of days ago, whatever it was, and that’s what I met with,’’ Wilfork said. “I’ve moved forward, I’m done with that situation, and you know, what I’m just focused on is my football career and one thing I don’t want to do is be a distraction to this team, to this organization, and I won’t be that.

“My teammates stuck behind me 100 percent, my family, the organization, so I’ve moved forward. I’m definitely [looking toward playing the] Lions now and it feels good to be around a great group of guys. It feels real good.’’

In his Twitter statement, Wilfork said that he and wife Bianca had decided it was not appropriate to comment while the NCAA and Miami were conducting their investigation. According to Shapiro, he lavished dozens of players with cash, meals, entertainment, and other items over an eight-year period.

Shapiro is currently in federal prison for his part in a multimillion-dollar Ponzi scheme.

In the Yahoo! story, Shapiro alleged that he gave Wilfork a $50,000 cash payment during his junior season with the Hurricanes to sign with the agency he was part owner of, Axcess Sports. Axcess and agent Michael Huyghue negotiated Wilfork’s first contract with the Patriots. Huyghue is now commissioner of the UFL.

Work to do Though Tom Brady led the Patriots to touchdowns on their first three possessions against Tampa Bay Thursday night, and four in the first half, Brady and coach Bill Belichick have given the performance lukewarm reviews.

Brady insisted yesterday on WEEI that he wasn’t lying when he felt there are improvements to be made, and gave one major example of what he’ll be focused on Saturday night in Detroit.

“It’s hard for you guys to understand and watch the game on TV and understand why the quarterback does what he does, why I threw to a particular place, when I was supposed to throw the ball and when I actually did throw the ball, and you can get away with it at times.

“But I just know from how I felt during the game to how I evaluated myself after the game to watching the film that decision-making is something that I really want to focus on this week at practice because it’s not where it needs to be.’’

Happy to be here Tight end/fullback Garrett Mills is back in New England after spending the last four seasons with the Vikings, Eagles, and Bengals, and he’s happy to be back where his NFL career got its start.

Drafted by the Patriots in 2006, Mills didn’t play a game with the team his rookie season, and was placed on injured reserve in November. The following season, the team released him out of training camp, hoping to sign him to the practice squad.

Instead, Minnesota claimed him, setting off a little dispute between then-Vikings coach Brad Childress and Belichick. Childress still claimed Mills despite Belichick calling and asking him not to take him.

Participation report After a day off Sunday, the Patriots were back in full pads yesterday behind Gillette Stadium.

Six players were in uniform who haven’t taken part in practice in days - or weeks: Julian Edelman, Taylor Price, Brandon Tate, Ras-I Dowling, James Sanders, and Shaun Ellis. A few of them took part in Saturday’s walkthrough. Their participation yesterday indicates real progress in terms of their health.

But there were still 15 players who were not in uniform, in addition to the four still on the physically unable to perform/non-football injury list. The missing players included rookie running backs Stevan Ridley and Shane Vereen, Leigh Bodden, Danny Woodhead, Dane Fletcher, Brandon Spikes, Jermaine Cunningham, and Mike Wright.

Several of those players were on a different field doing conditioning work.

Greg A. Bedard of the Globe staff contributed to this story; Shalise Manza Young can be reached at syoung@globe.com. Follow her on Twitter @shalisemyoung.