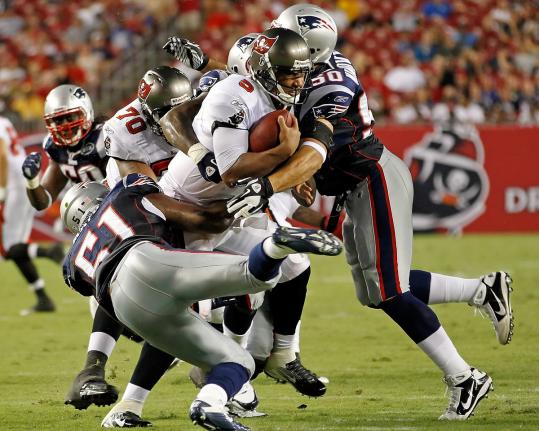 TAMPA - It’s obvious that Jerod Mayo can cover ground and make tackles, as evidenced by his league-leading 175 stops last season.

But he’s long said that the next step for him is to make big plays, such as sacks and forced fumbles.

Now that the Patriots look as though they’ll be playing a lot of four-man defensive fronts, Mayo may be freed up for those potentially game-changing plays.

Last night, Mayo was all over the field from the first snap, when he nearly sacked Buccaneers quarterback Josh Freeman. On the third snap, he broke up a pass intended for fullback Earnest Graham. Mayo finished with two sacks.

“I feel comfortable, going into my fourth year,’’ Mayo said. “Coach [Bill] Belichick is doing different things with me, so whatever it ends up being I’m willing to do.’’

“There aren’t a lot of weak points in his game,’’ said Belichick.

Solder stands tall Nate Solder held his own last night as he got his first chance to protect Tom Brady in a game situation.

With Matt Light not in uniform, Solder was in at left tackle. The rookie had started and played there in the preseason opener, but Brady did not play in that game.

Last night, Brady played the majority of the first half. Solder did get help, at times from fellow rookie Will Yeatman, an undrafted tight end.

While he held up well for most of the first half, Solder did give up a sack to defensive end Tim Crowder.

Solder politely declined to talk to reporters after the game.

Rebuttal of charge Albert Haynesworth’s sexual assault case took another circus-like turn, with the prosecution alleging that Haynesworth, through his attorney, attempted to influence the outcome with money.

Haynesworth has been charged with one count of misdemeanor sexual abuse for fondling a waitress’s breast in Washington. The trial is set to start Tuesday.

Yesterday’s filing by the prosecution reads, in part: “The government is well aware of the fact that on numerous occasions since the assault took place, defense counsel has approached [the waitress’s] attorney, offering a sum of money in exchange for [the waitress’s] assistance in getting the criminal case dismissed.’’

This information comes on the heels of defense attorney A. Scott Bolden claiming the alleged victim offered $50,000 for testimony against Haynesworth.

Scary hit There was a scary moment in the fourth quarter when Danny Woodhead was clobbered by Tampa Bay’s Devin Holland during punt coverage.

Woodhead hit the ground face first and was motionless. He popped up, then had to be held up by his teammates as trainers sprinted onto the field. Woodhead struggled to keep his balance but eventually was able to jog off.

He did not return, but could be seen smiling moments after the play.

All he would say after the game was, “I feel fine.’’

Bounce-back effort Rookie quarterback Ryan Mallett received a reality check in his first drive of the second half.

Five plays into the possession, Mallett floated a pass that was intercepted by Elbert Mack and returned 69 yards for a touchdown.

Mallett settled down after that, finishing 9 of 14 for 71 yards.

Wilfork won’t comment After figuring prominently in the reports about University of Miami players receiving improper benefits from imprisoned former booster Nevin Shapiro, Vince Wilfork took to Twitter Wednesday night to comment on the story. “I am aware of the report that has claims that involve me while at the U . . . While the NCAA and the U conduct their investigations @Mrs75 [his wife] and I believe that it is not appropriate for us to comment . . . Thanks for your continued support and confidence in me.’’

Lockett, Fletcher hurt Defensive back Bret Lockett had to be carted off in the second quarter after suffering what the Patriots termed a thigh injury. On replays, it looked as though it may have been a groin . . . Linebacker Dane Fletcher left with a thumb injury in the second quarter and didn’t return . . . According to a league source, the Patriots will bring in veteran receiver Mark Clayton for a workout. Clayton spent last season with the Rams.

Shira Springer of the Globe staff contributed to this report.