For depth, they may be in league of their own 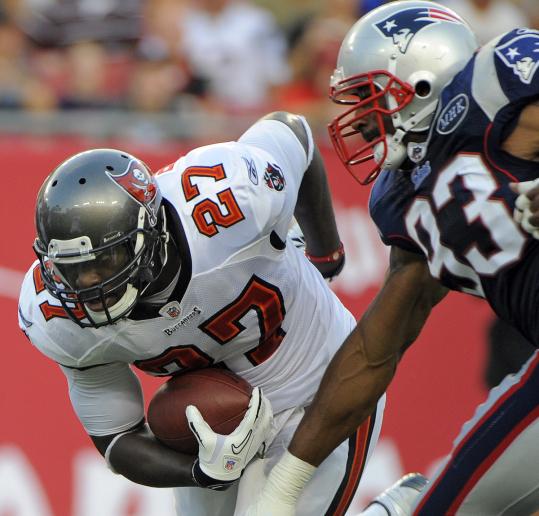 TAMPA - A lot of the NFL witnessed the Patriots’ undressing of the Buccaneers last night at Raymond James Stadium.

And they were just as impressed as you were.

“That was one of the biggest beatdowns I’ve ever seen in a preseason game,’’ one NFC executive said at halftime. “Yeah, they’re pretty good.’’

“They’ve got it all working right now,’’ said an AFC executive. “Every facet.’’

There were 15 teams represented in the press box last night, with two staff members each from the Ravens, Dolphins, Saints, and Jets.

The Patriots have been consistently good under coach Bill Belichick. They were 14-2 last season. But even the 28-0 performance by New England’s starters in the 31-14 win left the scouts a bit in awe.

“If they stay healthy, the Patriots are going to be tough to handle, absolutely,’’ said the AFC executive. “They’re better right now than they were last season.

“Sure, the Bucs didn’t look like they wanted to play. But the execution by the Patriots was really on point. That’s what was impressive. That, and how deep they are on the defensive side of the ball. They have a lot of players.’’

The Patriots knew they needed to bring more pass pressure to help their third-down defense. What they’re doing right now is helping every down.

It was wave after wave of players in the front seven beating their opponents and getting up the field. It was dizzying.

On the Buccaneers’ first possession, Jerod Mayo had a quarterback hit from his weakside linebacker spot. Then Andre Carter penetrated against a run and Dane Fletcher cleaned up. On third down, tackle Kyle Love pressured QB Josh Freeman.

On the second possession, Gerard Warren dropped LeGarrette Blount for a 3-yard loss. Carter had a pressure and Eric Moore a quarterback hit on second down. The Buccaneers’ offensive line was so spooked there was a false start on third down, and they needed a screen pass just to stem the tide.

It continued throughout the first half. The carnage was impressive, even to a six-year veteran such as Buccaneers right guard Davin Joseph.

“They used to be a 3-4, gapping-type defense,’’ he said. “They’re more of an attacking defense now. They have the right guys for the defense and they’re able to work it. And it seems like they’ve been playing it for years. And you would have never known they made a switch, even with no OTAs or an offseason. You couldn’t tell.

“They had the right guys inside, they had the right defensive ends. They have the right linebackers for that defense. It was a heck of a challenge today to go against some quality guys. My hat’s off to them.’’

On quick blush in the first half, the Patriots’ defense accounted for the following disruptive plays against the quarterback or in the backfield: nine quarterback pressures, eight QB hits, two sacks (both by Mayo), one quarterback knockdown, one tackle for a loss, two holding penalties, and one false start.

That’s a total of 24 in 28 offensive plays by the Buccaneers. The Patriots might not have had that many in an entire game last season.

“[Bill] Belichick is through screwing around,’’ said the NFC executive. “What we saw tonight, if that’s the way they continue to go into the season, is a complete departure from what we saw last season. They’re not reacting. They’re dictating.’’

It starts with the defensive line, which still doesn’t have Albert Haynesworth and Shaun Ellis.

“All of those guys, all the way down to [Landon] Cohen, [Darryl] Richard, and [Kade] Weston, will be playing somewhere in this league, I promise you that,’’ said the AFC executive. “I don’t know how they’re going to figure that out. Do you know? Because I want to get a jump on getting those guys on my team.’’

The Patriots turned Carter loose at right defensive end by playing him on almost every down. He lived in the backfield and beat left tackle Donald Penn repeatedly. Carter had two quarterback hits, one pressure, and drew two holding penalties.

“I don’t know if that left tackle blocked one person that first half,’’ said an NFC scout.

The Patriots also served notice that Mayo will be turned loose at weakside linebacker. He looked like a natural blitzing and pressuring the quarterback. Mayo had two sacks, two hits, and one pressure.

“He is a talented guy,’’ Joseph said. “There’s no doubt he has all the tools to be a great linebacker. It’s going to be interesting to see as the season goes how he fulfills that spot. He’s been playing ‘Mike’ linebacker in a 3-4 defense, so it will be a little bit different for him. But he has the speed to play the [weak] linebacker position and he has all the talent to be able to tackle in the open field. So I think he’ll do well.’’

Mayo will only be able to fill that role if the Patriots get healthy at middle linebacker.

Brandon Spikes, the starter there, has missed considerable time. His chief backup, Fletcher, left with a thumb injury.

“That’s the only place where I see them being thin,’’ said the AFC executive. “They need Spikes in the middle to make it work. [Gary] Guyton can’t play there.’’

If the Patriots started the season tomorrow, Mayo would have to go back to middle linebacker. After what we saw last night, that would be a waste.

The Patriots’ secondary was much maligned last season. Looking at two Buccaneer quarterbacks total 8 of 20 for 79 yards (51.9 rating) just goes to show how pass rush and coverage go hand in hand.

Brandon Meriweather started with Patrick Chung at safety, but Sergio Brown rotated in for both. The reviews among scouts for Brown were positive.

“We really liked him coming out of school,’’ said the NFC executive. “He played corner in college so he’s versatile, which we like. Can he start? Not sure about that yet. But I don’t think he would hurt you.’’

Another NFC executive said it’s hard to trust Meriweather, and he’s going to need to play well for the defense to flourish.

“You never know what you’re going to get with him,’’ said another NFC executive. “He’s always had talent.’’

The Patriots have talent, that’s for sure. And the rest of the league knows it.