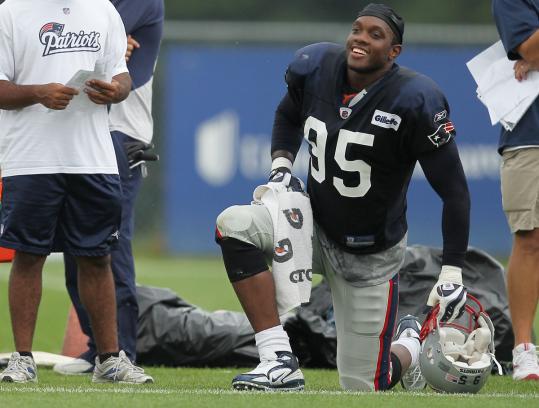 FOXBOROUGH - Mark Anderson had one job as a rookie with Chicago in 2006: He came in on third down and was told to get after the quarterback.

He did just that, racking up a dozen sacks and forcing four fumbles.

After that season, however, the Bears asked Anderson to diversify. He had to learn different blocks and deal with double-teams by tight ends and tackles.

And he was no longer the sack machine he looked to be in ’06.

Now Anderson reluctantly acknowledges he needed more than speed and athleticism to have success in the NFL - he had to learn how to play the game.

After totaling just 9 1/2 more sacks in three-plus seasons in Chicago, he was released last year and picked up a week later by the Texans. Anderson rediscovered his pass-rushing groove with four sacks in 11 games.

But Houston did not bring him back, and when the NFL lockout ended and free agency opened, the 28-year-old heard from just one team: the Patriots.

It was a humbling experience.

“My mind-set, my goal is to work hard. It wasn’t nothing but extra motivation,’’ Anderson said. “I’ve been here, been there, now I just know I’ve got to go out and take care of business.’’

Listed at 6 feet 4 inches, 255 pounds, Anderson is one of 18 defensive linemen on the Patriots’ roster. He opened some eyes Thursday night against Jacksonville in the preseason opener. He had one quarterback hit and was in the backfield on other occasions despite limited playing time (about 15 snaps).

“I think I did decent, but there’s still a lot that I need to improve on - playing the run, rushing the passer,’’ he said yesterday. “There’s always more for me to improve on. It’s just the first game, I’ve been back just a week, so it was good to get back out there and run around and stuff.’’

“Mark is a versatile player, a real hard-working kid. He competes hard on the practice field; very attentive, wants to do well, puts a lot into it, can play both sides,’’ Belichick said. “He actually played inside in Chicago as well - some 3-technique and worked some as an inside pass rusher, so he’s pretty adept when he lines up outside and comes inside.

“He’s flashed some good pass rushes through the course of camp in one-on-ones and in our team work and then again [against the Jaguars]. He’s definitely adjusting to what we’re asking him to do and he’s got a pretty good skill set. He’s an experienced player who’s rushed against a lot of good players in this league, so he has a good set of moves and skills to attack them with. We’ll see where it goes from here, but I’m glad we have him.’’

Anderson is trying to make a name - and a spot - for himself in a sea of linemen.

He’s focused on making as few mistakes as possible, though he concedes there will be some along the way as he picks up a new system. Paying attention to detail is a big part of that, which is where defensive line coach Pepper Johnson comes in.

“Pepper, he’s just a great defensive line coach. He goes over every day how specifically he wants us to shed blocks, attacking a blocker, squeezing the tight end to the ‘C’ gap - just little small details we go over every day, we’re working on pass-rush moves,’’ Anderson said. “But we’re hitting every detail there is as a defensive lineman.’’

Johnson called Anderson “a true professional’’ and said he made a difference when he got into the game against Jacksonville.

“It’s always a new day,’’ Johnson said. “I take every day one day at a time, and I’m just trying to build on it and get better.’’