THIS STORY HAS BEEN FORMATTED FOR EASY PRINTING
PATRIOTS NOTEBOOK

Slow and steady for Gostkowski 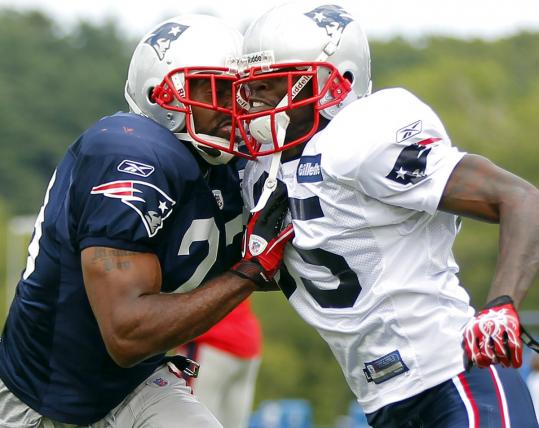 FOXBOROUGH - Months ago, Stephen Gostkowski was kicking a soccer ball, trying to reach about 20 yards. Week to week, the tasks were small, but the goal for the Patriots kicker was to regain his strength after having surgery to repair a right torn quadriceps in his kicking leg. The injury forced Gostkowski to miss the final eight games of the regular season and the playoffs.

Gostkowski didn’t know what to expect after the surgery, but he is grateful to be in training camp and kicking again.

“From where I was seven or eight months ago to where I am now, it felt like a long time, but now it feels like a short time,’’ Gostkowski said. “It’s good to be back.’’

Gostkowski is easing into his routine. He has been kicking field goals at practice and maintaining his accuracy. He hasn’t kicked off with the team yet, but has done it on his own.

“We’re just taking Stephen day to day,’’ said special teams coach Scott O’Brien. “He’s like everybody else. He’s going out there, he’s working on his technique. He’s getting a feel for it, he’s evaluating himself, and we’re evaluating him when he’s out there.’’

The good news for Gostkowski is that he isn’t limited by anything from the injury, O’Brien said. He is more focused on the conditioning aspect, following orders from trainers not to overdo his workouts. He also is working on his timing again.

“Every specialist tries to get a number of quality kicks after they warm up, which requires a lot of other kicks just to get ready to perform,’’ O’Brien said. “He’s at his numbers and he’s increasing his numbers like he would any time.’’

Defensive end signs After bringing in a few defensive linemen for tryouts the past few days, the Patriots signed defensive end Mark Anderson, who played four seasons with the Bears and last year with the Texans. Anderson, who is 6 feet 4 inches and 255 pounds, was on the field for his first practice yesterday. The Bears drafted Anderson out of Alabama in the fifth round in 2006. He had a dynamic season, leading all rookies with 12 sacks. In his career, he has 25 1/2 sacks and has forced five fumbles in 77 games . . . Defensive lineman Albert Haynesworth did not participate in yesterday’s full-pads workout, missing his first practice since passing his conditioning test a week ago. There was no explanation for his absence, but he wasn’t the only one missing. Linebacker Brandon Spikes and defensive end Mike Wright also were not seen on the field. Offensive lineman Ryan Wendell and rookie running back Shane Vereen missed another day. James Sanders, Ras-I Dowling, Eric Kettani, Josh Barrett, Marcus Cannon, Matt Light, Kevin Faulk, Brandon Deaderick, Kyle Hix, and Ron Brace all did not practice.

Money matters On the business side, here are contract numbers for a few players, based on records on file with the NFL Players Association as of yesterday. The numbers are base salaries and do not include incentives. Chad Ochocinco is down for a base salary of $6 million and would be a free agent next season. Haynesworth is slated to make $5.4 million this season, $6.7 million in 2012, $8.5 million in 2013, and $10.3 million in 2014. Running back BenJarvus Green-Ellis didn’t get an extension and signed his restricted free agent tender for $1.84 million . . . The Patriots released defensive lineman Marlon Favorite, who was signed to the practice squad in January as he completed his second NFL season.

Learning his trade Julian Edelman ended his college career at Kent State as a quarterback. Yet he is making a career for himself in the NFL as a receiver and punt returner.

Last season, Edelman averaged 15.3 yards per punt return, a franchise record. He led the AFC and was second in the NFL to Devin Hester’s 17.1 yards for the Bears.

O’Brien said the third-year player has come a long way.

“The thing I love about Julian is because he has never done it before . . . he learns it the way he needs to learn it as a position player and as a specialist on the field,’’ said O’Brien.

“It’s just not the play. There are a lot of situations within the play, and we try to create that for him, and even in practice when they do it incorrectly, he can learn from it, because it will come up again.

“He’s just growing into it. Every year he has more confidence because he feels better about playing situations that he gets on the field and then he feels like he is in better control, like all of the good ones.’’

“Obviously, you’re going to get a little more comfortable back there because of the experience I’ve had these last couple years,’’ said Edelman, “but you know, there hasn’t been live bullets yet. It’s a little different - guys are coming a little faster when it’s game time - and I’m looking forward to having that opportunity here in these preseason games and getting used to that again.

“It’s always going to be a little different in the game.’’

Greg A. Bedard and Shalise Manza Young of the Globe staff contributed to this report. Monique Walker can be reached at mwalker@globe.com. Follow her on Twitter @monwalker.