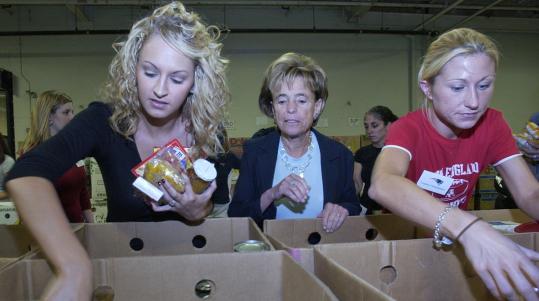 Myra Kraft's charitable efforts trickled down throughout the Patriots organization. In September 2007, Kraft (center) helped out at the Greater Boston Food Bank, with the fiancees of two of the team's players. (Lisa Poole/File 2007)
By Monique Walker Globe Staff / July 21, 2011

In the hours following the news, some players shared their thoughts on Twitter and others released statements to express how much Kraft affected them with her presence and generosity.

“I am extremely saddened with the passing of Myra Kraft,’’ Patriots linebacker Jerod Mayo said. She “has been a mainstay in the community and the Patriots family. Her giving spirit along with her countless random acts of kindness and philanthropy will continue to be a legacy to be remembered.’’

Patriots running back BenJarvus Green-Ellis, who is preparing for his fourth season in New England, said, “Mrs. Kraft was a wonderful, kind, gentle and warm spirited lady. Even though she was battling cancer she still found time to give back to the community (a true philanthropist) and the Patriots players. She had this way of making you feel special.’’

Kraft’s charitable efforts trickled down throughout the Patriots organization as players followed her lead to give back. During the season, many players squeeze in charity events on their days off.

Running back Kevin Faulk, who has played 12 seasons with the Patriots, said he often brings his family to charity events because he wants his children to see the effect of giving back. That attitude began with Kraft, Faulk said.

“Myra Kraft meant a whole lot to me and my family with her influence and her generosity,’’ Faulk said. “She did so much for the state of Massachusetts as well as the Patriots.’’

Her importance to the organization was immediately clear yesterday as owners and players caught up in the ongoing NFL lockout took a moment to pass along messages of support to the Kraft family.

Matt Light, a Patriots free agent offensive lineman who was in Washington for meetings on the labor dispute, explained how Kraft affected him in his 10 years with the team.

“She wasn’t someone we saw like Robert or Jonathan and the rest of the family, but her impact was felt in many other ways,’’ Light said on NFL Network. “And just the things she did, in that community, and what that did for guys on the team. I mean, it really drove me to do a lot to give back and find my little niche to be a part of that community. I’ll tell you, she’s an incredible person. She really was. It’s amazing how much one person can do.’’

Patriots defensive lineman Vince Wilfork wrote on Twitter that he was disappointed he didn’t get to see Kraft one last time, but that she “was a wonderful woman who my wife and I loved dearly.’’

Former Patriots fullback Heath Evans, who played from 2006 to 2008 with the Patriots, wrote on Twitter, “We have lost 1 of the greatest women I know & hands down the finest in all of sports w/ the passing of Mrs. Myra Kraft.’’ He added, “What made Myra Kraft special? Strong but Tender-hearted/Proud but Humble/Bold but Soft-Spoken/ Extremely blessed but lived to be a Blessing.’’

“She’s going to be on a lot of people’s minds during the season,’’ he said.

A look at Myra Kraft