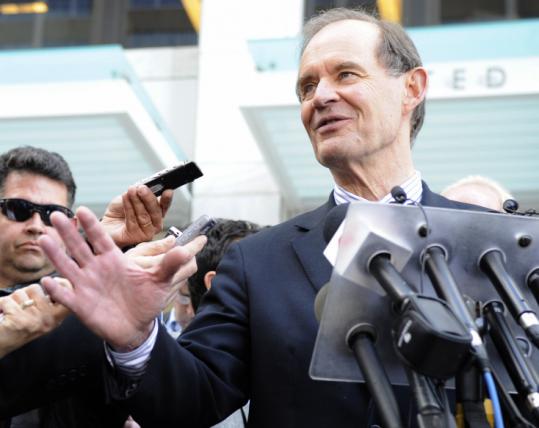 ST. PAUL — After a hearing that lasted about four hours, US District Court Judge Susan Richard Nelson yesterday took the preliminary injunction motion in the Brady v. National Football League suit under advisement and said she will need two weeks to make her ruling.

The injunction was brought by 10 players who are lead plaintiffs, including Patriots quarterback Tom Brady and guard Logan Mankins, with the aim of ending the three-week-old lockout of players by owners.

Neither Brady nor Mankins were in court, but former Patriots linebacker Mike Vrabel was. He declined to comment following the hearing.

Nelson also urged both sides to settle the case with the help of the federal court. That’s an option the NFL has repeatedly said it has no interest in because any settlement would keep a new collective bargaining agreement under the purview of the court system.

The NFL wants an agreement collectively bargained and third-party arbiters put in place, similar to the other major sports.

“The court will rule as quickly as possible,’’ Nelson said at the conclusion of the proceedings. “But I do feel compelled to say that it will probably take me a couple of weeks to do a fair job to both sides and take a look at the issues and determine if a hearing is needed or not, and to rule.

“In the meantime, it seems to me that both sides are at risk. And this is a very good time for you to come back to the table. Not to the union table, not to the players’ table, but to the federal court table, which is in the middle. Let’s say neutral table, if you will. It fully protects you in every way from any consequences and this is really a matter which should be resolved, in my view. There are a lot of folks who are impacted by this beyond those present today.’’

The hearing had NFL lead counsel David Boies in the crosshairs for most of the day. He was at the lectern for a combined 2 hours and 22 minutes, and fielded approximately 64 questions or comments from Nelson.

Jim Quinn, lead counsel for the NFL Players Association, and Michael Hausfeld, who represented the retired players in the case that was joined with Brady, combined to speak for 1 hour, 37 minutes and took only 14 questions/comments.

Usually it’s not good news for a side if a judge is repeatedly trying to poke holes in their arguments. But Boies said he’s not reading much into it.

“You really can’t,’’ he said. “I’ve been doing this for 45 years and I’ve never been able to figure out judges’ questions, exactly where they’re coming from.’’

One of the big blows Boies received from Nelson — “You can assure that the court has done nothing else in the last few weeks,’’ she said — was about the Norris-LaGuardia Act of 1932, which the NFL insists precludes the court from stopping a lockout.

“Isn’t there some bit of irony that the Norris-LaGuardia Act is designed to protect employees from strike-breaking federal judges, should now be used to prevent an injunction of a wealthy, multi-employer unit seeking to break players who are no longer in a union?’’ Nelson asked.

It was one of the only times during the hearing that Boies, a legendary antitrust litigator, didn’t have a swift response.

Nelson dropped some hints that she seems to agree with the players on several key points, including whether a lockout is legal once a union decertifies.

“I’m having a hard time understanding why the [labor] exemption would protect a lockout post [union decertification],’’ Nelson said.

The NFL maintained that the decertification was merely a tactic by the players and that it shouldn’t be valid. Nelson didn’t seem to buy that.

“Would you agree that players or employees can choose whether they want to be in a union or not? And these folks can disclaim if they want, can’t they?’’ Nelson said. “It’s a big risk on their part. They lose a lot by doing it. But they can do it, can’t they?’’

“The 8th Circuit [Court] on a number of occasions has advised us or taught us that we should use primary jurisdiction very sparingly, particularly in light of the delay that is caused by deferring to the agency,’’ Nelson said.

And then she dropped a fairly big hint that it appears she will side with the players on one of the major points in granting a preliminary injunction: whether the plaintiffs would suffer irreparable harm.

“And here, I have to balance that against arguably a strong irreparable case,’’ Nelson said.

“You’d obviously have to have a hearing on that,’’ he said. “We don’t think there’s any basis for a strong irreparable harm argument on the players association part. We’d be prepared to litigate that at a hearing.’’

And while seeming to agree with Boies that owners are entitled to a labor exemption for some time after the CBA ends, Nelson said, “But it ought to be at the mediation table, not by refusing to pay your players, perhaps.’’

“Your honor, we are prepared to go back to the mediation at any time. We’ve said that,’’ Boies replied.

“Settlement discussions are something that the Brady plaintiffs and class counsel has said they have been willing to do from the beginning,’’ said Jeff Kessler, the players’ general counsel. “That’s litigation settlement discussions. That’s what the judge is talking about. Not collective bargaining. Not collective bargaining mediation in Washington. It’s an entirely different animal.’’

“That’s up to the NFL,’’ Kessler said. “The judge told them that’s what she thought they should do, and if not, she’ll rule.’’

Since the NFL has preferred negotiation, both sides are likely to hold their ground until Nelson delivers her ruling. Even that could come piecemeal. Since nearly all the talk yesterday was focused on Norris-LaGuardia and the NLRB, Nelson could first rule whether she has jurisdiction and then hold another hearing on the merits of the injunction.

But anything is possible.

“There are a variety of ways she could resolve this and I’d be a poor predictor of how she would approach it,’’ Boies said.