Violent return to a life left behind 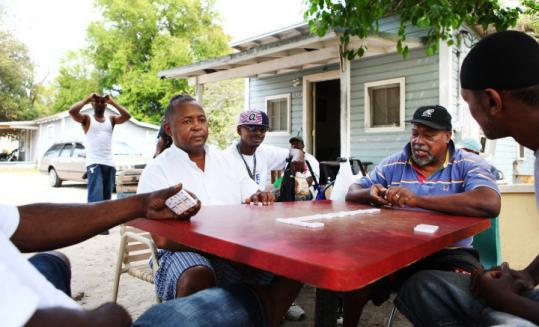 SOUTH APOPKA, Fla. — In a shadowy corner of a park behind the elementary school where Brandon Meriweather learned to play football, four young men sat on a picnic table, passing a flavored-tip cigar and reflecting on the hopelessness around them.

Poverty, drugs, guns, and premature death. Those are staples of life, they said, on the tumbledown streets where Meriweather grew up — streets that nearly claimed the Patriots’ Pro Bowl safety on Feb. 28, when an early-morning after-party turned violent and two men with him were shot in the head.

In a scenario familiar to athletes from impoverished neighborhoods who have tried to stay true to their roots after striking it rich in professional sports, Meriweather’s return to his hometown went awry. His attempt at hometown charity that weekend — including a basketball tournament and nightclub party — ended in an incident that could have jeopardized his life and possibly his Patriots career.

The young men in the park were no strangers to Meriweather. A couple of them played in his tournament and partied with him before gunfire rang out. A bullet soared near Meriweather and ripped through the cheek of Meriweather’s cousin, Quentin Taylor. Another round grazed the head of Nico Stanley.

Meriweather, 27, has made no secret that many of his friends and relatives in this community 12 miles northwest of Orlando have ended up in prison or coffins.

“I’m tired of going to funerals,’’ Bryan Mathew said at the picnic table. “Brandon and them are lucky, man. We almost had some more funerals.’’

While authorities investigate the shooting — one of Meriweather’s relatives told the Globe last week the gunman was 28-year-old Anton Massey — Meriweather has secluded himself from the media and maintained a low profile in his hometown. Police have not identified any suspect, and Massey’s name has not otherwise been linked to the incident.

Meriweather spent a couple of hours Monday with the Apopka High football team, lifting weights and motivating players in training. Approached by a reporter, Meriweather said, “I’m not talking about nothing. I’m just down here working out and helping out.’’

A spokesman for the Orange County Sheriff’s Office, who last week confirmed Meriweather’s presence at the shooting and the department’s intent to interview him, had no further information on the case. A lawyer representing the shooting victims had stated last week that his clients had told him that Meriweather had fired the shots, an accusation he questions.

Apopka’s football coach, Rick Darlington, said he already has admonished Meriweather over the incident. The coach wondered why a millionaire such as Meriweather would choose to mill about on a dimly lighted street corner in South Apopka after 2 a.m.

According to a relative of Meriweather who witnessed the shooting, Meriweather was trying to break up a fight between two of his cousins, Taylor and Cedric Payne Jr., when Massey accidentally shot Taylor and Stanley while trying to defend them and Meriweather. The relative requested anonymity for fear of retribution.

Darlington said: “I told Brandon, ‘You have three names in life. Your first name and your last name were given to you. The third name is the name you make for yourself, and that’s the one you don’t want to screw up.’

“That’s what Brandon is dealing with right now — not screwing up the name he made for himself.’’

The coach said Meriweather should limit his visits to Apopka.

“It’s a hard situation because Brandon wants to remember where he came from, but sometimes when you make a lot of money and go back into a rough community you came from, there can be jealousy and bitterness,’’ Darlington said. “People can put you in a bad situation because, what do they have to lose? Nothing. What do you have to lose? Everything.’’

The cost of Meriweather’s latest visit to Apopka remains undetermined. In addition to paying a criminal defense lawyer to protect his interest in the Orange County sheriff’s investigation, Meriweather could find his football future affected if the Patriots have concerns about his off-field activities and decide to trade him in his final contract year, once the National Football League’s labor dispute is resolved. He is four years into a five-year, $8.75 million contract.

A ferocious streak Like most shootings that are said to involve alcohol, this one made little sense. Nearly everyone Meriweather partied with that night grew up with him in a hardscrabble patch of South Apopka, a nearly all-black district divided from Orlando’s predominantly white community by the rusting tracks of the Central Florida Railroad.

Apopka has made racial progress since the Ku Klux Klan spread terror there when Meriweather’s grandparents were children. His grandmother, Clara Pryor, was 4 when Klansmen from Apopka killed civil rights activists Harry and Harriette Moore in a firebombing on Christmas 1951, according to the state attorney general.

Since then, Apopka’s schools have been peacefully integrated. Blacks have risen to the office of police chief and city councilor. And the days when residents of South Apopka waited too long for fire and rescue crews are gone.

But Meriweather’s childhood neighborhood remains largely unchanged. Ramshackle homes abound where his mother, Gabrielle, lived when she gave birth to him at 15 and where his grandmother raised him until he was 11. A local couple, Tim and Mary Bridges, became his legal guardians after that, helping to provide the structure he needed to academically qualify for a college scholarship.

But Meriweather’s friends said he never stopped circulating on “the hood side’’ of town, where many children either overcame the challenges and became productive adults or succumbed to the perils.

“We have nothing to offer the kids in South Apopka right now,’’ said the Rev. Herbert Jackson Sr., pastor of the Fountain of Life Baptist Church, a block and a half from the shooting scene. “Sports are a way out of the ghetto, but they don’t necessarily help a guy if he leaves the place and gets great. It doesn’t wash away where he came from. You might have $10 million, but you can still have the ghetto mentality.’’

As a child, Meriweather embraced the tenet that the strong survive. “Other kids were scared of him,’’ his grandmother told the Palm Beach Post in 2005, Meriweather’s junior year at the University of Miami. “He was like a bully.’’

Meriweather inflicted most of his pain on the football field. In leading Apopka to the school’s first large-division state championship in 2001, he was a renowned headhunter.

“He was vicious,’’ Darlington said. “He would just decapitate people. If the NFL saw his high school tapes, they wouldn’t let him play. They would ban him.’’

Meriweather’s grandmother believed he had mellowed by the time he reached Miami, at least off the field.

Yet Meriweather remained ferocious on the field. With brute force that inspired such menacing nicknames as “Hit Stick’’ and “B-Ware,’’ he set the Miami record for career tackles by a defensive back (293). In 2005, he was named a semifinalist for the Jim Thorpe Award, awarded to the nation’s best collegiate defensive back.

He was on his way to a big payday in the NFL. Then came an early brush with gunfire.

Ten months after his grandmother portrayed him as a gentler man, Meriweather was armed with a concealed handgun before his senior year at Miami when an unidentified assailant shot his teammate, Willie Cooper, in the buttocks outside their off-campus apartment. Meriweather drew his weapon and fired three rounds, the attacker escaping unscathed.

Police cleared Meriweather because the handgun was licensed and the evidence indicated he acted in self-defense. Still, Darlington counseled him to live with “discipline, integrity, and honor’’ — a message the coach soon needed to repeat.

Three months after the Miami shooting, Meriweather lurched into a brawl between the Miami and Florida International football teams and stomped on the opposing team’s kicker while he lay face down on the ground.

A weekend’s violent end Meriweather, who played in the 2003 national championship game with Miami and the 2007 Super Bowl with the Patriots, has remained a devastating hitter in the NFL. He was fined $50,000 last season for a helmet-to-helmet hit on Baltimore’s Todd Heap.

To Meriweather, the fine was a sign that he cannot play in the NFL the way he played in high school, he told Darlington. Yet his passion for the game runs strong, as he showed Monday during Apopka’s workout.

With his long dreadlocks bouncing off his back, an animated Meriweather exhorted the Apopka team to work as hard as he did to succeed. He barked at several players, particularly K.J. Dillon, the school’s best defensive back, to beef up their training regimens. Dillon had just bear-crawled up and down the stadium stairs, then had hopped up and down on the stairs, first on one leg, then two.

“Come on, straighten up!’’ Meriweather shouted as Dillon bent over to catch his breath. “Let’s go!’’

It was Meriweather’s way of giving back, a chance for a little redemption after the shooting incident the last weekend in February. On that Saturday, he sponsored a family day at his childhood park: a basketball tournament, kickball games, and a cookout. A couple of Meriweather’s Miami teammates played on his team in the tourney, several witnesses said.

Meriweather’s squad lost in the tournament — and he took an errant elbow to the nose from Mathew in an early-round game — but the event otherwise was a success.

Sunday’s event, however, ended badly. Meriweather invited friends and family to the Blue Jeans Lounge, which stages a hip-hop night every Sunday from 9 p.m. to 2 a.m. Trouble began in the parking lot before closing time. According to one of Meriweather’s relatives, a mêlée erupted in the lot and Stanley’s sister clashed with Payne.

From there, Meriweather and a number of other patrons rode to Payne’s place to continue the party. Nico Stanley, meanwhile, went elsewhere to pick up Taylor and confront Payne over the incident with his sister, the witness said.

How Massey may have arrived at Payne’s residence remains unclear. But after Meriweather jumped between Taylor and Payne to defuse their confrontation, Massey began firing a handgun, Meriweather’s relative alleged. Efforts to reach Massey were unsuccessful.

“It wasn’t really a big beef to begin with, just a lot of family,’’ another witness said. “Then somebody came up shooting from behind, trying to get some street cred.’’

“It will all come out soon,’’ Mathew said at the picnic table, where the young men expressed support for Meriweather.

“We look at him as a hero because he made it out of here,’’ Mathew said. “He’s somebody from the south side who left the hood.’’

“Yeah, man, you got to struggle to get out of here,’’ Kedaris Morris said. “You got to admire him for it.’’

A fight had broken out three blocks away. The news sent nearly everyone at the picnic table sprinting toward the scene.

One man, Michael Davis, stayed behind, flicking ashes from the cigar.

“That stuff happens all the time,’’ he said casually.

Then Davis began walking toward the scene. When a reporter joined him, Davis paused.