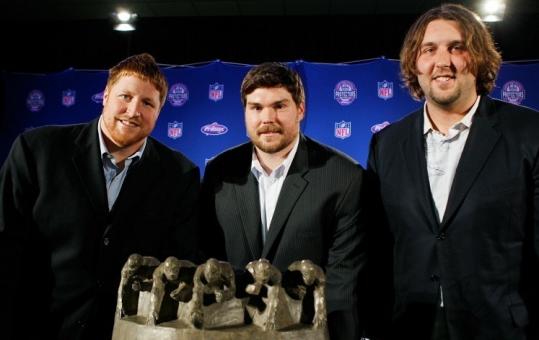 DALLAS — The trip to Dallas for a few members of the Patriots came with a bitter twinge.

Offensive linemen Dan Koppen, Dan Connolly, and Mark LeVoir arrived yesterday to represent the Patriots offensive line as recipient of the 2010 Madden Most Valuable Protectors Award. The award takes into consideration a combination of statistics, from sacks allowed to rushing and passing yardage.

While they were grateful, the players would have preferred to be in North Texas preparing for Super Bowl XLV. But the Patriots season ended with a 28-21 loss to the Jets in a divisional playoff game Jan. 16.

“Definitely would have liked to have been here under different circumstances,’’ Koppen said. “That’s just the way it works in the NFL, and we didn’t earn our spot to be here, so we’re just going to have to deal with that and learn from it and get better from it.’’

But this may have been the last season for some of the more familiar names on that line. Not only is the start of the 2011 season uncertain because of the CBA situation, but there are questions regarding the future of Light and Mankins. Both will be free agents, but Mankins could end up slapped with the franchise tag, which would keep him in New England for at least another season.

The murky waters of contract negotiations aren’t in Koppen’s job description, but he would like to see both back next season.

“In the NFL, there’s a lot of movement,’’ said Koppen. “There’s different coaches, different players, but of course those are two guys you would want back.’’

The loss to the Jets continues to sting, considering the Patriots’ 14-2 regular-season record and all they were able to overcome to earn the No. 1 seed in the postseason.

“I haven’t watched it yet, but there’s definitely a point where we’ll go back and watch it at some point,’’ Koppen said. “We have a long time before the start of the season.

“You can always learn from what happened and correct your mistakes and try and figure it out. But it’s one of those things where you might have to watch it to sort of put it to rest.’’

Smith extended The Atlanta Falcons signed coach Mike Smith to a three-year contract extension after he led the team to the NFC South title. The deal locks up Smith through 2014.

Smith was a little-known defensive coordinator at Jacksonville when he initially signed a four-year contract with the Falcons in 2008, taking over a team coming off a dismal 4-12 season that included star quarterback Michael Vick going to prison and coach Bobby Petrino leaving the team after just 13 games.

Atlanta quickly turned things around under Smith, going 11-5 and making the playoffs in his first season. The Falcons followed with a 9-7 mark — the first consecutive winning years in franchise history — and then went 13-3 this season, earning the top seed in the NFC playoffs.

Muir moves up The Chiefs filled their need for an offensive coordinator, shifting offensive line coach Bill Muir to replace Charlie Weis, but nobody’s saying who will be calling the plays next season. Muir is Kansas City’s fourth offensive coordinator since coach Todd Haley arrived two years ago. Muir said he has never had sole responsibility for calling offensive plays, but has been heavily involved in various aspects of play calling over his 34 years in the NFL. Before joining Kansas City in 2009, Muir was offensive coordinator for seven seasons with Tampa Bay, including in 2003, when the Buccaneers won the Super Bowl . . . Jay Gruden, an Arena Football League veteran and brother of former NFL coach Jon Gruden, is the Bengals’ new offensive coordinator. Gruden replaces Bob Bratkowski, who was fired Monday . . . The Bears hired Mike Phair as defensive line coach. Phair spent the past six seasons with the Seahawks, the last as a defensive assistant.

Whistling workers The NFL selected Walt Anderson to referee the Super Bowl, handing the 15-year veteran official his second assignment in the league’s championship game. Anderson was a line judge at the 2001 Super Bowl. The other members of the officiating crew are umpire Chad Brown, head linesman Kent Payne, line judge John Hussey, field judge Doug Rosenbaum, side judge Mike Weatherford, and back judge Scott Helverson . . . The latest survey conducted by the players’ union showed the Steelers have the least-favorite grass field. Of 1,619 players who participated, 678 chose Heinz Field’s grass, which tends to easily get torn up. Voted worst among artificial turf stadiums was the Metrodome in Minneapolis. University of Phoenix Stadium was voted best grass field, and best artificial turf went to Indianapolis’s Lucas Oil Stadium . . . An Associated Press-Knowledge Networks poll showed only lukewarm public backing at best for a switch from 16 to 18 regular-season games, one of the NFL’s key proposals in its labor negotiations with the players’ union. Of the 1,125 adults surveyed, 27 percent strongly favor or somewhat favor adding two regular-season games and dropping two preseason games. When the group is narrowed to the 482 people who identified themselves as NFL fans, support for the change rises to a total of 45 percent — yet only 18 percent who strongly favor it.