Jackson takes hit on his credibility 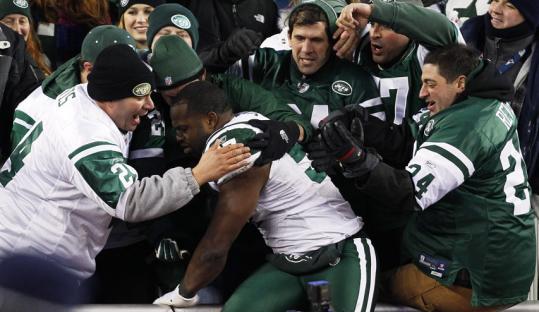 And to think it was just days ago when “they hate their coach’’ stood as the most foolish comment Tom Jackson ever said relative to the Patriots.

That infamous verbal gem, spoken directly into the camera with wrongheaded conviction by the ESPN analyst on a 2003 episode of “NFL Countdown,’’ was in reference to Bill Belichick, who had waived respected safety Lawyer Milloy before that season’s opener against the Bills.

Milloy joined the Bills and helped them defeat the Patriots, 31-0, prompting Jackson to opine that the team had strong negative feelings toward its coach. He later admitted that no Patriot had told him such a thing.

The Patriots, infuriated by Jackson’s comment, proceeded to go 17-1 the rest of the way en route to a Super Bowl victory.

That backfiring opinion is tough to trump. But Jackson might have done it.

In the aftermath of the Jets’ stunning 28-21 victory over the Patriots Sunday, motormouth New York linebacker Bart Scott called out Jackson (as well as fellow “NFL Countdown’’ analyst Keyshawn Johnson) during a wildly entertaining on-field interview for picking the Patriots to win.

It was nothing Jackson (or Johnson) should have felt obliged to apologize for; the Patriots were heavily favored and had beaten the Jets by 42 points a little more than a month earlier. Just Bart being Bart.

Yet on Monday morning, during an interview with the hosts of ESPN’s “Mike and Mike’’ radio show, Jackson said he picked the Patriots so he would — and this is still hard to believe — motivate the Jets.

“It was done premeditated,’’ Jackson said. “I played a bit of a psychological game with the Jets. It’s something that I need to explain. I thought that more important to the Jets than hearing another score of ‘24-21, they have a chance to win,’ was that it was important that they have in their mind, ‘You got beat, 45-3. A large segment of the population believes that can happen to you again.’

“I wanted to further fuel and cement them in that bunker mentality of us against the world. As a defensive player, I certainly knew that they had a chance to win and I thought that they certainly might win the game.

“But I knew when they saw 30-10 that I think they would be reminded of what most people were feeling. And I knew they needed to be a little angrier going on the field.’’

The reaction to his comments on radio and other media was swift and universal in tone:

What could Jackson possibly have been thinking?

Since the “they hate their coach’’ incident, Jackson’s credibility has been permanently dented within the Patriots organization and with their fan base. In his book “Patriot Reign,’’ an inside account of the 2002-03 seasons, Michael Holley writes that Belichick “would never forgive’’ Jackson, despite their longtime association dating to 1978, when Jackson was a star linebacker for the Broncos and Belichick was the team’s assistant special teams coach and defensive assistant.

Nationally, however, Jackson, an amiable personality who has been at ESPN since 1987 and won the 2009 Sports Emmy for Outstanding Studio Analyst, seemed to maintain his credibility.

At least until his strangely subjective comments Monday.

Jackson, who was not reprimanded by ESPN management, provided the following explanation for his “Mike and Mike’’ comments through an ESPN spokesman yesterday:

“On ‘Countdown,’ I picked the Patriots, 30-10. I absolutely believed they would win the game, and I actually thought it had the potential to be worse after the 45-3 game over the Jets a few weeks earlier and with the way New England was playing. I saw Bart Scott’s comments postgame and I was shocked and stunned by what he said because they were directed at me.

“What I said on radio the next morning was an excuse to try to answer Bart. I should not have made those comments. I’m not arrogant enough to think that in any way I affect the outcome of NFL games, and in no way did I intend for a team to be motivated or non-motivated.

“I’ve been on air for almost 25 years and I have always prided myself on being impartial. Every time I’ve made a pick on TV or anywhere else, it reflects what I believe will happen based on my research and what I’ve observed as an analyst.’’

It’s open to interpretation whether Jackson is better at explanations than he is at predictions.

But one question remains: Why would someone as accomplished as Jackson jeopardize his credibility just because he cared what Bart Scott thought?

It’s not only the Patriots who wonder where Jackson is coming from now.

An unusual ‘Slant’ Comcast SportsNet New England aired the season’s final episode of the Tom Curran-hosted “Quick Slants’’ last night, and that’s too bad. This space has intended to review the freshest and most entertaining local sports program to come along in years in greater detail, but another topic (such as Jackson saying something ridiculous) always seemed to get in the way. So let’s leave it at this: Curran’s quick wit and veteran reporter’s insight kept us tuning in until we became used to the frenetic Jim Cramer-style mannerisms. And Mary Paoletti was a find as the program’s mellow social media whiz who held her own when bantering with the host. It’s refreshing when a new approach or format works so well. Kudos to Curran and CSNNE not only for trying something new, but for getting it right.