Brady to have foot surgery today

QB has been playing with stress fracture

Tom Brady is expected to undergo foot surgery this afternoon at Massachusetts General Hospital, according to a source close to the situation.

The operation, to be performed by Patriots team physician George Theodore, will address a lingering stress fracture in the quarterback’s right foot. There is a small chance Brady will push back the surgery to Monday but no further.

Brady dealt with the injury throughout the season, receiving treatment from the team’s medical staff, but since the stress fracture remains, it was determined that surgery was the best option, said the source.

The operation, which may involve the insertion of a screw, is similar to what Red Sox second baseman Dustin Pedroia had last fall for a fractured navicular bone. If the bone heals without any complications, Brady should be ready for training camp.

Brady’s stress fracture may stem from a preexisting injury that at one point required him to wear a walking boot. At some points this season, Brady struggled with mobility because of the stress fracture.

Word of the injury surfaced in the days before the Patriots faced the Pittsburgh Steelers Nov. 14. Brady played in the game, a 39-26 victory, and completed 30 of 43 passes for 350 yards and three touchdowns.

He missed a handful of practices in the course of the season but never missed a game. He managed the flareups and led the Patriots to a 14-2 regular-season record. His performance sparked MVP chatter and led to his sixth Pro Bowl selection.

In the weeks following the victory over the Steelers, Brady remained on the injury report, listed with foot and right shoulder ailments. Neither seemed to affect his production. When Brady was asked about the injuries during the season, he often dismissed any troubles.

Brady was named a starter for the Pro Bowl Jan. 30 in Hawaii, but he was replaced by Chiefs quarterback Matt Cassel, Brady’s former backup in New England.

Playing through nagging injuries is nothing new for Brady. Toward the end of last season, reports surfaced that he played with cracked ribs.

He ended this season with 36 touchdown passes, a total he bettered only when he threw a record 50 in 2007. Brady completed 66 percent of his passes (324 of 492) for 3,900 yards. Brady threw only four interceptions all season and set an NFL record for consecutive passes without an interception at 339.

The streak ended last Sunday in the playoffs against the Jets when David Harris intercepted Brady’s pass in the first quarter and returned it 58 yards before tight end Alge Crumpler tackled him 12 yards shy of the end zone. 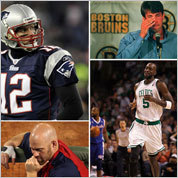