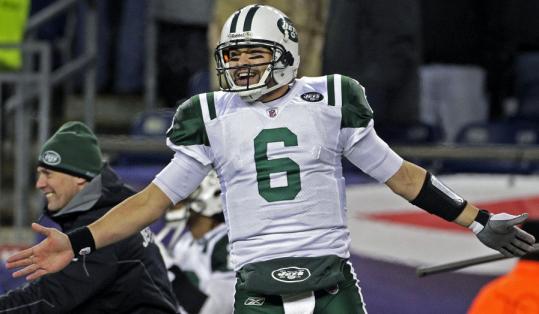 Throwing for three touchdowns was key, but it was the Jets’ fourth TD, on a 16-yard run by Shonn Greene, that brought a smile to Mark Sanchez’s face. (Jim Davis/Globe Staff)
By Amalie Benjamin Globe Staff / January 17, 2011

He added, “The thing is with this young man, he’s just now getting better and better and better. He’s only in year two, he’s won a bunch of playoff games, that might be a record for most road wins or close to it, for a quarterback that’s only been in the league for two years.

Sanchez was able to throw the ball around against the Patriots, to the tune of 16-for-25 passing, 194 yards, and three touchdowns, including a near-perfect strike to Santonio Holmes that gave the Jets a 21-11 lead early in the fourth quarter. But perhaps the key play came in the second quarter, a play in which Sanchez demonstrated the maturity that he’s gained.

It was a play on which he saw something, saw an opening, saw a place for Braylon Edwards to go. He motioned, as he rolled out, gave himself enough time to think and react and change things up, to Edwards.

“The middle was open, so I kind of saw the seam right away, and kind of stayed with that and thought that might be the throw,’’ Edwards said. “Mark rolled to the left and pointed to the corner, and so I got off my defender and went to the corner, and Mark put the ball between myself and the sideline. I was able to make the catch. It was a heck of a ball, and even a better play by a second-year quarterback.

“He’s learning this thing, and he’s getting comfortable as we’re going back to the AFC Championship for the second time. We’re real happy where he is and his game play right now.’’

His poise, too. Not only was Sanchez able to make that read under pressure, the quarterback drew praise for his attitude in the huddle, for his ability to keep his teammates on track, for his calm in the midst of an unfriendly environment, in a game that Ryan had called the second-biggest in Jets’ history.

It was, as Edwards said, when his “swag’’ started speaking for himself.

“He wasn’t very vocal,’’ Edwards said. “A couple times he said some things, just things that we knew, but at the same time felt good to reiterate. But his body language, it spoke for us, let us know he’s confident, he’s sure, he’s going to get us in the right situation, he’s going to make plays. We just rolled with that, and we made the plays needed to win.’’

Added Sanchez, “Just staying positive. Your attitude and your body language, that stuff can spread throughout an entire team, good and bad, positive and negative. It’s important to stay up the entire game, not get too high, not get too low. You’ve got to understand, and the more experience I get, I’m starting to understand that there are going to be drives that go three and out, they’re going to make great plays on defense, they’re going to press the pocket a little bit, you’re going to have to stand in there and stay strong and not get down. That was one of the goals today.’’

He did exactly that. And in the end, Sanchez made the plays needed to win. There was the 58-yard catch-and-run to Jerricho Cotchery that set up Holmes’s touchdown, immediately after the Patriots had cut the Jets’ lead to 3 points.

It was a touchdown the Jets had to have. And Sanchez got it for them.

“What it comes down to is we knew that was a pivotal drive for us,’’ Edwards said. “We had to score, no matter what it took. We needed to get right back in control. It’s staying on pace. And Mark took that drive upon himself to make it happen. He did it. He went down there, he was calm, he was poised. He made the throws that he needed to make. The throw that he threw to Santonio was maybe his best throw of the season.’’

“He’s making it happen,’’ Edwards said. “He’s beaten Peyton [Manning] head-to-head. He’s beat Tom Brady head to head. Last year he beat Philip Rivers. Carson Palmer. People want to talk about Mark and him being the weak link at one point. When we get in serious situations, critical situations, he’s beaten everybody.’’