THIS STORY HAS BEEN FORMATTED FOR EASY PRINTING
Jets 28, Patriots 21

Patriots knocked down, out of playoffs in loss to Jets 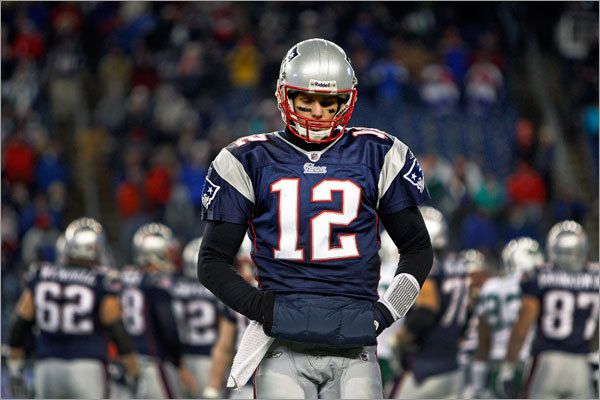 FOXBOROUGH -- The Jets talked trash about the Patriots all week long. The Patriots promised they'd provide their retort on the field, but in the end they were left at a loss for words and with a stunning 28-21 season-ending loss.

The Jets matched their strong talk with stronger play to best the Patriots in the rubber match of a bitter rivalry and win a game that New York's brash coach, Rex Ryan, had called the second-biggest in the history of the franchise behind Super Bowl III.

For the second straight year the Patriots, who now haven't won a playoff game in three seasons, went one and done with a shocking home playoff loss. For the second consecutive season the Jets are playing in the AFC title game.

"It's a disappointing way to end the season," said Patriots coach Bill Belichick. "You know, we just didn't do enough things well today to win, that's obvious, and the Jets did them well ... We're a better team than we played today."

The Patriots, who trailed 14-3 at the half, pulled within 21-14 on Shayne Graham's second field goal of the game, which came with 1:57 remaining. But on the ensuing on-side kick Jets cornerback Antonio Cromartie, who antagonized Tom Brady with a profane name earlier in the week, scooped up the kick and returned it 23 yards. Two plays later Shonn Greene sealed Gang Green's triumph with a 16-yard touchdown run.

Ryan waddled down to the end zone and joined in the celebration, which drew penalty flags, and a jubilant Mark Sanchez, who threw three touchdown passes in the game, hopped on Ryan's back.

The Jets had ratcheted up the rhetoric in the rivalry all week long with little response from the Patriots, except for wide receiver Wes Welker's subversive foot/toe references, a performance at the podium that caused him to be benched for the Patriots' first possession. Now, the entire New England team, which had won eight straight games, is sitting out the rest of the playoffs.

"It's like you're on treadmill running 10 mph and then someone hits the stop button," Brady said.

The Jets sacked Brady five times and held him to 29 of 45 for 299 yards with two touchdowns and his first interception since Oct. 17. It took the Patriots, who blasted the Jets 45-3 last month, until there were 13 seconds left in the third quarter to find the end zone this time.

"I certainly wish I did a better job," said Brady.

New England marched 80 yards in eight plays to pull within 14-11. Brady hit Alge Crumpler with a 2-yard touchdown pass -- the 17th consecutive playoff game for TB12 with a TD toss -- and the Patriots dusted off the old direct snap play with Sammy Morris picking up the 2-point conversion.

The Jets came right back with a response. Sanchez (16 of 25 for 194 yards) threw a 7-yard touchdown pass to Santonio Holmes, who made a great diving grab in the back of the end zone. With all the talk about feet and toes this week, it was Holmes tapping his toes in the end zone to put the Jets up 21-11 with 13 minutes to go.

In the first half the Jets made it clear that they came to do more than just talk and that their Monday Night meltdown was merely a memory. Much to the dismay of the stunned Foxborough Faithful, the Jets built a 14-3 halftime lead, holding the Patriots to 127 yards of offense, sacking Brady three times, and intercepting him for the first time in 339 throws. Sanchez, the much-maligned Jets quarterback, tossed two TD passes in the first half and actually had more passing yards (101 to 99) than the Patriots' presumptive NFL MVP.

Ryan had said this game was about Rex Ryan versus Bill Belichick, and Ryan got the best of the action in the first half. While his defensive design contained and confused Brady, Belichick, trailing 7-3, boldly called a fake punt on fourth-and-4 from his own 38 with 1:14 left. It backfired when Patrick Chung dropped the direct snap and was tackled for no gain. It was the first fake punt run by the Patriots since Dec. 12, 2004 when Larry Izzo was stopped for no gain against Cincinnati.

Four plays later, Sanchez hit Braylon Edwards for a 15-yard touchdown to put the smack-talking, snack-eating Jets up 11 with 33 seconds left in the half.

"I was dead wrong," said Ryan. " I thought it would come down to me and Belichick, and thank goodness it never did, because he won that battle like he always does. It came down to our players."

The Jets scored the game's first touchdown with 10:24 left in the first half when Sanchez hit LaDainian Tomlinson out of the backfield for a 7-yard score. It was the first time under Ryan that the Jets had ever led at Gillette Stadium.

The Jets had an opportunity to strike first thanks to an occurrence as rare as a solar eclipse -- a Brady interception. Brady was picked off by linebacker David Harris at the Jets' 30, but Crumpler made a great hustle play to run him down and save a touchdown. The INT ended Brady's streak of 339 straight passes without an interception. Shaky Jets kicker Nick Folk botched the scoring chance with 30-yard field goal attempt wide left.

On the ensuing possession, the Patriots marched to the New York 7 but had to settle for a 34-yard field goal and a 3-0 lead with 1:12 left in the first quarter.

It was their last lead of the game and of the season.