THIS STORY HAS BEEN FORMATTED FOR EASY PRINTING
Safety measures 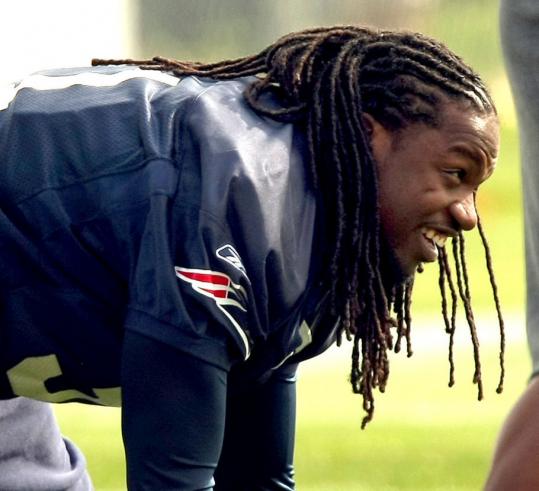 The dreadlocks may be long enough to obscure the name on the jersey, but with two Pro Bowl selections, people know who Brandon Meriweather is. (John Tlumacki/Globe Staff)
By Shalise Manza Young Globe Staff / January 14, 2011

FOXBOROUGH — On radio talk shows, on Internet message boards, he has become the player many love to hate.

When he was announced as a Pro Bowl reserve a couple of weeks ago, his selection was immediately questioned, by national and local reporters who wondered how he earned a spot on the AFC roster alongside Baltimore’s Ed Reed and Pittsburgh’s Troy Polamalu.

Certainly, there had to be a safety more worthy than the Patriots’ Brandon Meriweather to represent the conference, right?

“Why isn’t he?’’ asked fellow New England safety Jarrad Page. “As far as I’m concerned, he does what he’s supposed to do in the defense, he’s got good awareness out there, he breaks on the ball, he reads the quarterback well.’’

But this is nothing new for Meriweather, at least not since New England made him the 24th overall pick in 2007. Since that day, he has faced questions — about his character, his play, his judgment — and to some, he never seems to provide the right answer.

Two highly publicized incidents at the University of Miami led some to see Meriweather as a problem child and a symbol that the Patriots had lost their way, yet he has not had one off-field problem in New England.

He quickly attached himself to Rodney Harrison, and now spends much of his time with respected veteran James Sanders. They are in the film room nearly every day at 7:30 a.m. and sometimes put in more work together at night.

After his rookie year, when he let no fewer than four potential interceptions slip through his hands, Meriweather spent his offseason catching at least 200 passes a day; the next season, he pulled in four picks.

Last year, he increased that to five, including a two-interception performance in London against the Buccaneers that included a pick-6.

Meriweather had a dream come true that season when he was named to the Pro Bowl as an alternate; he used to pad around the locker room wearing sandals with the Pro Bowl logo, a gift from a friend that served as inspiration.

He doesn’t wear them anymore. He doesn’t have to.

It was during the lead-up to the game in Miami last January that Meriweather made a comment that lives in infamy, set to music at that.

Asked by reporters about the Patriots’ trip to England, he said one of his favorite things was seeing the “Big Ben clock.’’ But with his Florida twang, it sounded like “big bang clock,’’ and one Boston radio station turned the interview into a song, to the tune of the “Happy Days’’ theme song.

If you’ve heard it and laughed, Meriweather is laughing right along.

“I think that’s hilarious,’’ he said. “[Matt] Light was the first one that showed me.’’

Not everything has been funny this year, though. In October, Meriweather, who turns 27 today, made his first major on-field mistake, launching himself at Baltimore tight end Todd Heap for a helmet-to-helmet hit. It was one of several Week 6 hits that caused reverberations around the league for their ferocity.

For a brief time, there was talk that Meriweather might be suspended by the NFL, but he was given a hefty fine instead. A couple of days later, he was visibly shaken as he publicly apologized for the hit.

He hasn’t been flagged for an unnecessary roughness hit since then, and the league recently reduced his fine from $50,000 to $40,000.

Yet in spite of his 66 regular-season tackles, in spite of his three interceptions and fumble recovery, outsiders still question how it is that this safety, whose dreadlocks have grown so long that they now cover the name on his jersey, could be considered one of the league’s best.

“Everyone knows what he’s capable of,’’ said Sanders. “He goes out there and makes plays, and a lot of teams don’t even try to throw it his way because they know what can possibly happen if he gets a good bead on the ball.

“He’s been playing the same way for the last three years, making plays and playing at a high level for us. That’s what we continue to need going forward.’’

And it isn’t just his teammates who come to his defense.

“I like him,’’ said an NFL personnel executive whose duties include studying the Patriots. “He plays hard, he flies around.

“I don’t know the reasoning why they rotate those safeties. I’m not sure, but the guy, when I see him, he plays the game with reckless abandon, which you want the safety to do.

“He’s got range and he’s got some ball skills. I’d like to have him on my team.’’

The executive went on to say that without knowing Meriweather’s responsibilities within the Patriots’ intricate defense, it is tough to say that he’s sometimes a step slow to a play. Playing in a rotation, sometimes alternating series with Sanders or Patrick Chung, may throw him off and make it tough to get into a groove.

For his part, Meriweather shrugs at the notion that he doesn’t belong in the Pro Bowl. People say a lot of things, he reasons. In football — in life, he adds — people love you when you make a big play and hate you if you don’t.

But does he feel he’s played well enough to warrant being named an all-star for a second time?

“I feel like we’re winning,’’ he says without hesitation.

It’s an answer no one should find fault with.

Greg A. Bedard of the Globe staff contributed to this story. Shalise Manza Young can be reached at syoung@globe.com. Follow her on Twitter @shalisemyoung.