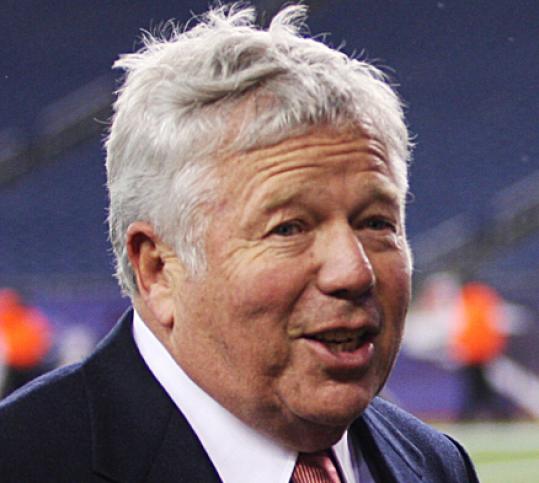 Robert Kraft got his man in 2000, and his man has gotten results. (Bill Greene/Globe Staff)
By Bob Ryan Globe Columnist / January 14, 2011

If hiring Bill Belichick wasn’t the best decision Bob Kraft ever made, it was among them.

Lest anyone forget, Belichick’s appointment as Pete Carroll’s successor was not met with universal approval.

“A lot of people have forgotten all the guff I took,’’ recalls Kraft.

Belichick had an impressive reputation as a defensive guru, but his five-year run as head coach of the (original) Cleveland Browns, forerunners of the Baltimore Ravens, had tarnished his image. To be polite, he had proven to be somewhat lacking in, um, people skills.

Matters were complicated when Belichick, the presumptive heir to the Jets’ coaching job — he had been their defensive coordinator under Bill Parcells from 1997-99 — stunned the Jets, and much of the professional football world, by rejecting his appointment on the very day the anointment was to take place. That was the day he sent out the famous note declaring that he no longer wished to be the “HC of the NYJ,’’ a move that led some observers to declare him as certifiably loony.

Yet Kraft took the occasion to launch a pursuit of Belichick that would last more than three weeks and would include a hearing in front of commissioner Paul Tagliabue, who was asked to rule on a Belichick grievance concerning his contract with the Jets.

Kraft knew the way the game would have to be played, having been on the other side when Parcells wanted to leave New England for New York following the 1997 Super Bowl. Kraft obtained four draft picks from the Jets, including a first-rounder, in exchange for releasing Parcells (who he firmly believes had agreed to coach the Jets the instant Rich Kotite was out). Now he would have to give up something to secure the services of Belichick.

“Not everyone in the organization wanted Belichick,’’ Kraft explains. “Jonathan [Kraft] and Andy [Wasynczuk, vice president/business operations] wanted me to move on.’’

But Kraft was undeterred. Like the proverbial Canadian Mountie, he was determined to get his man, and that man was Bill Belichick. On Jan. 27, 2000, more than three weeks into the proceedings, an agreement was reached with the Jets, and Belichick was hired as head coach/general manager of the Patriots. The Jets had extracted the Patriots’ 2001 No. 1 pick, plus the No. 4 and No. 7 picks in 2001, in exchange for the Jets’ fifth pick in 2001 and the seventh pick in ’02.

“I had to give a ransom, really,’’ Kraft declares.

And it turned out to be a heist at twice the price. Eleven years later, the Patriots are gearing up for another run at the Super Bowl, which would be their fifth trip in the Belichick era.

So what did Kraft see in Bill Belichick that others didn’t?

The relationship took root in the 1996 season, when Belichick returned to the Patriots as assistant head coach and secondary coach in between his time in Cleveland and his departure with Parcells to the Jets.

Understand that by this time Kraft had received a thorough education in the whys and wherefores of being an owner in the NFL. He had inherited Parcells from James Busch Orthwein, and from the beginning, Parcells made it clear that Kraft’s primary function, in his eyes, was to sign the checks and get out of the way. And, by the way, contracts be damned.

That was very unsettling to a businessman such as Bob Kraft.

Kraft spent a great deal of time talking to Belichick that year, and the more he did, the more impressed he became. The native intelligence and the devotion to the game were very obvious.

“I remember a conversation we had about [linebacker] Chris Slade,’’ recalls Kraft. “He knew everything about him. He pulled out a book with information.’’

Kraft also was blown away by Belichick’s awareness of the entire NFL. Back in 2000, Kraft had marveled, “Every recommendation he had made in ’96 was an excellent recommendation.’’

Kraft even thought about hiring Belichick to succeed Parcells, but he admits he simply chickened out. He had been so scarred by Parcells that he was afraid to hire someone with a Parcells connection. He reached out for the anti-Parcells instead, and by the end of the 1999 season, he knew Mr. Nice Guy Pete Carroll had to go. The team was clearly regressing.

“Pete was a great guy,’’ Kraft acknowledges. “But I know how to run a business, and by then I knew Bill Belichick was the right guy for me.’’

It wasn’t one thing; it was everything. The NFL world was changing, and new skills were needed for a coach to succeed.

“Bill Parcells was not transitioning well into the salary-cap era,’’ Kraft maintains.

He felt that Wesleyan economics major Belichick would not have that problem.

Kraft had no doubts about the Belichick football acumen. Compliments were flying in from everywhere. Lawyer Milloy and Ty Law endorsed him. Shawn Jefferson sounded as if he wanted Belichick to run for president.

“If they hire Bill Belichick,’’ proclaimed the wide receiver, “the Patriots win the division. Mark it down. He’s the smartest defensive coach in the league, and the offensive guys respect him.’’

But there had been problems in Cleveland that needed addressing.

“Previously, I think I maybe tried to do too many little things,’’ Belichick said, “too many things that maybe took away from bigger picture things I should have been doing.’’

He also said, “There are a lot of things on the periphery and outside, off the field, that are also important toward winning, and I’ll put more time and effort into making sure those things are right for the organization than maybe I did previously.’’

One thing he has done extremely well is manage and maintain long-term success. Kraft’s dream was to be a perennial contender, not some one-hit wonder.

“I want people working for me who are driven to succeed, but who won’t change once they get there,’’ Kraft says. “Now, we all change to a degree, but the key is to keep it restrained. Bill has done that.’’

The only major glitch has been Spygate, which aggravates the rest of the world far more than it does anyone around here. Surely there isn’t an owner in the league who wouldn’t have traded places with Kraft over the past 11 years, Spygate included. That’s not being amoral; that’s being realistic.

“We’re lucky to have him as a head coach,’’ Kraft concludes. “He’s a wonderful manager. He was born to coach.’’

It was Bob Kraft’s most important personnel decision, and he got it right. Pretty good choice, huh?