THIS STORY HAS BEEN FORMATTED FOR EASY PRINTING
Jets notebook

Avoiding Revis is not a bad idea 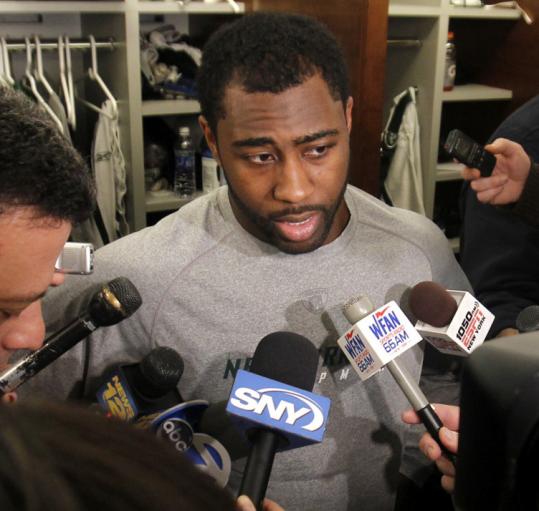 FLORHAM PARK, N.J. — There is an easy way to deal with Darrelle Revis: avoidance.

And, according to Jets coach Rex Ryan, that’s exactly what he would do if he had to game-plan against the player often considered the game’s best cornerback.

As Ryan said yesterday, “I’d do what everybody else does, just throw away from him.’’

“Obviously, you’re going to take shots on him and stuff like that. He’s matched up against great players most of the time.

“So, like last year, we put him always on their best receiver. So once your best receiver is catching the ball, you’re eventually going to have to challenge him.

The last time the Patriots faced the Jets — in a 45-3 rout at Gillette Stadium Dec. 6 — they didn’t throw in the direction of Revis.

And it proved to be a wise move.

“He’s got the talent, but there are so many guys in this league that have talent,’’ said Jets linebacker Jason Taylor. “That’s not to slight Darrelle, but everybody has talent.

“He’s very gifted with a lot of athletic ability and he’s quick and fast and strong and he’s physical, but I think the things on top of that or outside of that are what make him really good — the studying, the diagnosis.’’

Revis was a significant factor in the Jets’ win over the Colts last Saturday, holding Reggie Wayne to one catch for 1 yard.

“Having a chance to watch him throughout training camp and see him work every day, the beauty of it is he works at it,’’ Taylor said.

“He takes pride in it even during the week, doesn’t like to get beat in practice at any time. You see that carry over to the games.

“He’s the best cornerback out there, and one of the best I’ve ever seen.’’

Smith uncertain It’s unclear whether Brad Smith, who has been bothered by a groin injury, will return kickoffs Sunday, with Ryan saying Smith needs to be “100 percent or close to it.’’

If Smith can’t go, cornerback Antonio Cromartie likely will get the call, though special teams coach Mike Westhoff said the Jets might go with a couple of options.

With the Jets trailing the Colts, 16-14, and less than a minute remaining, Cromartie returned a kickoff 47 yards to help set up Nick Folk’s winning field goal.

“Cro does a great job in our practices helping us, but to be honest with you, he really wasn’t on our kickoff-return depth chart,’’ Westhoff said.

“During the week, Cromartie came looking for me in my office, and he saw [assistant special teams coach] Ben Kotwica and he told Ben, ‘Give Mike a message. Tell him that in this game, in the playoffs, if he needs me anywhere, I’ll cover a punt, I’ll be on the kickoff team.’

“He said, ‘Anything he needs, tell him don’t look for anybody else.’ And that’s exactly what I remembered when I had to make a decision. And he’s the only guy I was going to.’’

Coleman injured Nickel back Drew Coleman suffered a knee injury on the last drill of practice yesterday. “We don’t know anything right now,’’ Ryan said. “He was just doing a drill and kind of went on the ground or something.’’ Defensive coordinator Mike Pettine said the Jets would likely go with a committee at the position if Coleman can’t play, though Ryan said Kyle Wilson would be the likely fill-in . . . Ryan had some praise for Patriots coach Bill Belichick — or at least an admission of larceny. “I think you recognize guys that I certainly appreciate, like Dick LeBeau, Belichick, that if I’m going to steal from, I generally only steal from the best, and I’ve stolen from him in the past, so I respect him that way,’’ Ryan said. “But again, I’ve got no love for him this week.’’