Lined up for a return 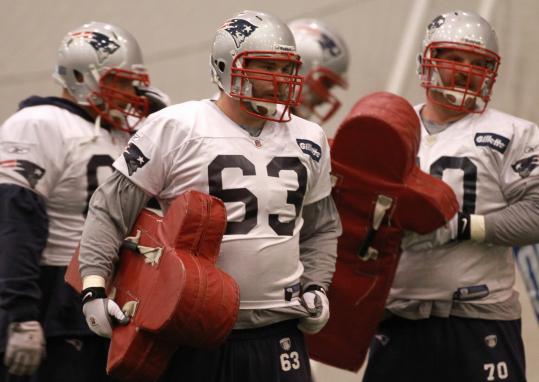 With his historic 71-yard kickoff return immortalized in the Hall at Patriot Place, guard Dan Connolly took his place with the other linemen at practice yesterday. (Barry Chin/Globe Staff)
By Michael Vega Globe Staff / January 13, 2011

FOXBOROUGH — The sight of Dan Connolly rumblin’ and bumblin’ and stumblin’ his way to a 71-yard kickoff return will likely go down not only as the play that bronzed his professional football career but also the signature moment of the Patriots’ 14-2 regular season.

Until his memorable return against the Packers Dec. 19 — the longest in NFL history by an offensive lineman — Connolly was known as a trustworthy reserve who toiled tirelessly and, for the most part, anonymously on the Patriots’ offensive line.

But now, it seems, he has become as much a household name among Patriot fans as, well, Danny Woodhead.

Connolly, however, suffered a concussion in that 31-27 victory over the Packers, and did not play in the last two games of the season.

Yesterday, speaking to reporters for the first time in almost a month, Connolly declined to specify how and when he suffered the concussion, saying only that it didn’t occur on the kickoff return. Other than that, he reported that he was ready to go against the Jets Sunday at Gillette Stadium.

Asked if he expected the Jets to kick away from him, Connolly smiled and said, “I don’t think they’re too worried about me.’’

It remains to be seen whether Connolly will start at right guard.

“I’m back to practice and everything, so we’ll see how things go,’’ said Connolly, who started the first seven games of the season at left guard during Logan Mankins’s holdout. After playing a reserve role in Week 9 at Cleveland, Connolly shifted to starting right guard and made six starts in place of Stephen Neal, who was placed on injured reserve (shoulder) Dec. 2.

But Connolly will forever be known for his kickoff return.

“Friends and family have gotten a lot of e-mails and a lot of text messages,’’ he said. “I guess my name, I’m noticed a little bit more, but I get a little more fan mail now than ever before.’’

Although he preferred to turn the page, Connolly obliged media members eager to revisit his memorable feat.

“I’m not going to say it’s common, but it’s something that I’ve been faced with, I think, three times this season and once last year,’’ Connolly said. “We haven’t worked on it regularly, but we have worked on it before.

“I just saw the ball, grabbed it, and I was planning to get what I could and it ended up being a lot more than I thought.’’

As for his teammates’ exuberant reaction?

“That was cool,’’ Connolly said. “Probably even better was that it gave the team the energy and spark we needed to get that game back in our favor.’’

Initially, Connolly said, he expected to get hit as soon as he fielded the kick at the 25.

When he broke through the first line of defense, bear-hugging the ball with both arms, Connolly turned his thoughts to getting as much yardage as he could. He broke left and shifted the ball to his left arm, carrying it like a sack of groceries and stiff-arming Green Bay’s Charlie Peprah.

Told that his Heisman-like stiff arm looked as though it had been practiced, Connolly said, “I never have. I don’t know where it came from.’’

“I couldn’t believe it when I was watching it,’’ said left tackle Matt Light. “But you put the ball in the hands of an offensive lineman and, well, naturally it is not a real shocker.’’

“You don’t see that every day, so that was kind of crazy,’’ said center Dan Koppen. “But he’s done a good job since he came in and we’re glad to have him back. Hopefully, we’ll get some work done this week in practice and move on.’’

When The Hall at Patriot Place asked the team for mementos of Connolly’s return, it came as another surprise.

“Yeah, it is cool,’’ Connolly said. “I haven’t had a chance to see it. There’s some great names in there and it’s an honor to be in there with those guys.’’

The exhibit, titled “Thunder Dan Connolly,’’ features his No. 63 jersey, a copy of Patriots Football Weekly that shows the play on the cover, a copy of the team’s press release announcing his selection as AFC Special Teams Player of the Week, and, of course, the football he cradled on the run.

“I was excited just about the play happening,’’ Connolly said. “Honestly, the last thing on my mind was being upset that I didn’t score. I was completely honored to hold a record in the league like this, and Special Teams Player of the Week was just icing on the cake.

“It was a cool honor to receive and I’m proud to have received it.

“Had we lost, that play probably wouldn’t have been as important.’’