Is he coming on strong? 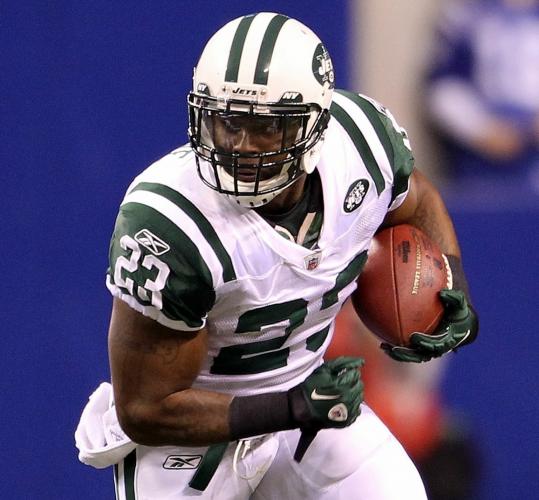 Shonn Greene had 70 yards on 19 carries vs. the Colts last week, which is not at the level of two games during his first postseason. (Andy Lyons/Getty Images)
By Amalie Benjamin Globe Staff / January 13, 2011

“I think it was just good timing and execution,’’ Greene said. “I think when your team is executing, everybody does their job real well. For me, last year, I think the offensive line did a great job, along with the wide receivers downfield. It was a mixture of all things that combined into one.’’

His running style — decidedly north-south — fit in the postseason. It fit with the Jets. And yet, for all the promise from those two postseason games, all the excitement that emerged, things haven’t exactly turned out the way the Jets hoped.

With faith in Greene (and a desire not to pay a significant roster bonus), the Jets cut ties with running back Thomas Jones last March. They also signed LaDainian Tomlinson, a back with as many questions about his potential as there were answers about his excellent past. But even with Tomlinson installed on the roster at the start of this season, it seemed Greene’s job to lose.

He got the start in the first two games. He fumbled twice in the first game, losing one. He managed just 52 yards on 15 attempts in the second. He hasn’t had a start since.

So much for Shonn Greene, Jets star running back.

Instead, Tomlinson appeared rejuvenated, averaging more than 4 yards per carry through the first five games of the season. He combined with Greene to propel the team’s ground game forward, but Greene never quite showed what he had in last season’s playoffs.

Still, as Greene said, “I think me and LT got kind of a good rhythm going back and forth. It makes it that much harder on the defense, preparing for both of us. I think it takes a toll on them in the game, chasing LT and then having to tackle me.’’

That might be true, but the Jets would love to see another playoff performance like they did last year from Greene, especially with Tomlinson having slowed in the second half of the season. Greene had 70 yards on 19 carries in last weekend’s win over the Colts in the first round, but he hasn’t clicked the way he did in those two postseason games last season.

Asked if his style was particularly suited to the postseason — he has 374 yards in four playoff games, one injury-shortened — Greene said, “I would say so. I just try to go out and do what I can and help the team out.’’

His quarterback was more direct.

“He’s a bruiser,’’ Mark Sanchez said. “He’s a tough back. Shonn, he really comes on at the end of the season. It helps LT. It helps the offensive line.

“He’s just kind of that extra boost. It looks like he’s got fresh legs. He’s tough, and he’ll lower his head and hit you. It makes it tough on defenders trying to tackle him.’’

It’s easy to see what Sanchez is talking about. Greene has a solid 235 pounds on his 5-foot-10-inch frame. He can roll over defenders at times, especially when they’re tired, especially in the playoffs. And that is something the Jets would like to see from their running backs Sunday, knowing that the more time they hold the ball, the less time Tom Brady has it in his hands.

“It’s very important, especially in the postseason, you’ve got to be able to control the clock,’’ Greene said. “If we can control the clock, running the football, that turns it in our favor a lot. It helps our passing game out; you’ve got safeties coming down and just throw one over their head for a big play.

And the Jets aren’t likely to get anywhere if all they’re doing is throwing the ball, with an ineffective ground game.

If Greene can be a large part of that balance, a large dose of a bruising back perhaps wanting to prove that the two playoff games last season weren’t a fluke, so much the better.