In Brady, Patriots have a coach on the field 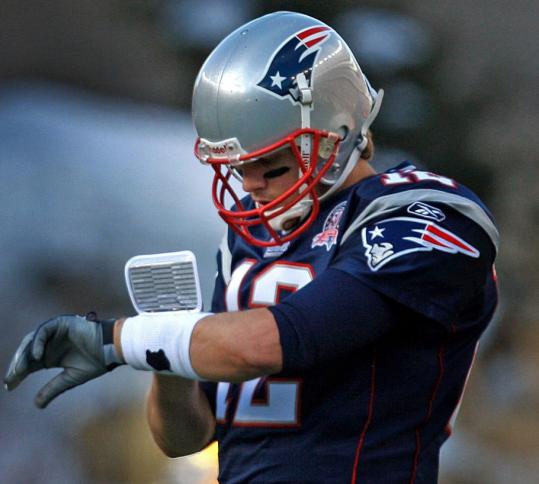 The ultra-prepared Tom Brady always has the intricacies of the complex New England offense at his fingertips — or at least on his wristband. (File/Barry Chin/Globe Staff)
By John Powers Globe Staff / January 9, 2011

FOXBOROUGH — The coaching never stops, not even after the ball is snapped and Tom Brady is orchestrating his star-spangled video game.

The Patriots quarterback may not be listed on the coaching staff but there’s no question that he’s a full-time, if not overtime, assistant — tutoring, correcting, cajoling, applauding.

Brady has been the starting quarterback for 161 games (including playoffs) over the last 11 seasons. Of the team’s 5,809 passes attempted since he took over for the injured Drew Bledsoe in the second game in 2001, Brady has thrown 5,347 of them despite missing all but the first eight minutes of the 2008 season. He has worked with two offensive coordinators and four quarterback coaches. This season alone he has thrown to 13 receivers and handed off to eight ballcarriers.

“Obviously, to have that kind of player on the field is like having a coordinator out there in the huddle,’’ says Miami coach Tony Sparano.

Except for coach Bill Belichick, nobody knows New England’s offense better than No. 12.

“There are certain plays that are called on a weekly basis that I’ve run literally thousands of times,’’ reckoned Brady, who’s still using one that he called when he first was summoned from the bench against the Jets a decade ago. By now he has a doctorate in signal calling.

In a season when the Patriots huddle has been peopled by an uncommon number of new faces, Brady’s role as informal coach has become even more significant.

“You want to get on his page,’’ said tight end Alge Crumpler, who played in Atlanta and Tennessee before signing on as a free agent here last March. “I’ve been in a lot of different offenses, and he’s been in the same offense his whole career. The quickest way to get on board is to pick his brain and find out exactly what he wants.’’

Since half of his receivers and backs weren’t here last season, Brady has taken pains to make sure that all of them are cued in.

“We spend a lot of time communicating about different things,’’ he said. “Things that may come up or that have come up. Watching a bunch of film on things that we have done over the last 16 weeks and saying, ‘OK, this was a good way and this was not so good of a way. This is the spacing we need, this spacing doesn’t work. This is the timing we need.’ ’’

Brady always has been the master of the minutiae that decide football games.

“He’s always working on the little things,’’ said Belichick. “It might be on one thing that could come up on one play, and that play might happen twice a season. Who knows?

“He continues to try to have a better understanding of our offense and what options there are on certain plays, certain situations.’’

Option quarterback While the New England offense isn’t particularly elaborate, the variables make it imperative that each player understand his role.

“It’s very defined in what you’re supposed to do,’’ says analyst Phil Simms, who quarterbacked the Giants to a Super Bowl championship in 1987. “It’s not complex. It’s smart and simple.’’

Brady’s encyclopedic knowledge of the playbook and his proven ability to execute it allow him to consider multiple options on most plays.

“I think I have a lot of flexibility with what we’re able to do, but a lot of that stuff is talked about before the game, so it’s not like I’m really free-lancing out there,’’ he said. “I think the coaches have a pretty good understanding of why I would do certain things.’’

After winning 125 games and three Super Bowls, Brady has earned the latitude to improvise as he sees fit.

“You’re talking about maybe four quarterbacks who have that freedom at the line of scrimmage — [Philip] Rivers, [Peyton] Manning, [Drew] Brees and Brady,’’ reckoned CBS analyst Boomer Esiason, who was an NFL quarterback for 14 years with the Bengals, Jets, and Cardinals. “All those other guys are still being told what to do and how to call a game.’’

When they break the huddle, Brady makes sure the Patriots are in synch about the what-ifs.

“Some plays, everybody knows that it could be this play or that play, or if we see something else, it could be that,’’ said Belichick. “And then there are other plays where we are pretty set and committed to run.

“I think when the whole team goes up there, they all need to know that. You don’t want them all to go up to the line thinking that we’re going to do this and all of a sudden out of right field we do something else.’’

Still, his teammates understand that Brady may change things at the last moment if he sees a defensive weakness or mismatch.

“At the end of the day whatever Tom likes and whatever he’s comfortable with, that’s what we’re going to be doing,’’ says receiver Wes Welker.

Which is why, instead of taking a knee with five seconds left in the half and a 27-0 lead on a snowy afternoon in Chicago, Brady went deep to Deion Branch for a 59-yard touchdown that killed off the Bears.

It was a low-risk, high-reward situation involving a receiver whom the quarterback knows by heart.

“Just him having the comfort level knowing that I’ll be there,’’ said Branch, who’d played with Brady for four years before decamping for Seattle. “And me knowing where he’s probably going to put the ball.’’

Relentless in preparation Even so, Branch, who said it took him and Brady a couple of weeks to get back in the groove after he came back from the Seahawks in October, needs occasional clarification.

“He may still throw a check out there and it may be a check from training camp,’’ Branch says. “I’ll say, ‘Tom, what are you doing? What is this check?’ And he’ll think, ‘OK, we haven’t gone over that part with him. He wasn’t here.’ ’’

Neither was running back Danny Woodhead, who was wearing Jet green when the season began. So besides speed-reading the New England playbook, he consulted with Brady on the fine points.

“If I have a question, he’s always there to help out,’’ said Woodhead. “He wants to make sure that everyone is on the same page with him.’’

With three new tight ends, including rookies Rob Gronkowski and Aaron Hernandez, and a featured back in Green-Ellis who’d started only three games before this season, the Patriots can’t afford any confusion. And with the Patriots’ multiple-choice attack, Brady is continuously adjusting to the various weapons at his disposal.

“That’s where the quarterback has to be on top of things,’’ says former Indianapolis coach Tony Dungy, now an NBC analyst. “In their packages with their people, he has many options. That’s the amazing thing, that Tom can keep all that straight.’’

Manning, the maestro of impromptu intricacies in Indianapolis, is obsessive about making sure the Colts are in the same corral. When top draft pick Anthony Gonzalez missed some workouts in 2007 because he was finishing up at Ohio State, Manning became his visiting professor.

“Peyton was driving twice a week to Columbus to get Anthony up to speed, throwing balls to him,’’ Dungy recalls.

Brady, who’s at the top of the Patriots’ seniority list, has taken on a similar tutorial role, most of it by example. Well-done, he likes to say, is better than well-said.

“He’s relentless in his preparation, his quest for perfection,’’ said Belichick. “He does pretty much everything that you would want a quarterback to do. He does extra running in practice, watches a lot of film, studies the game plan, studies the opponents, asks questions to make sure that he’s got it right.’’

Brady always has been generous about sharing his expertise, especially with his understudies, because he knows they’ll have to step up immediately if he goes down, as he did when Bledsoe was hurt.

“Tom is a guy who has been a mentor to me since the day I walked into the league,’’ said Chiefs quarterback Matt Cassel, who took over two seasons ago when Brady tore up his knee in the opener. “He is a guy that I constantly rely on, a guy I talk to every week if not every other week.’’

His teammates get Brady’s feedback every day, every play.

“He’s very encouraging when guys make good plays,’’ Belichick said earlier in the season. “He’s the first one to congratulate them, tell them about it and show the appreciation.

“If there’s a mistake, whether it’s his or somebody else’s, then he’ll talk about that. Sometimes it’s him talking about something he did wrong that everybody else on the team was right on and he screwed it up. Or maybe it’s somebody else and he’ll talk to them about what that person needs to do right.

“I think that’s what any good quarterback, any good leader, does. They reinforce the positive and try to correct the negative in a positive way and try to be objective and fair about it.

“I think he does all of those things. That’s why he’s Tom Brady.’’