Brady has a trusty bunch 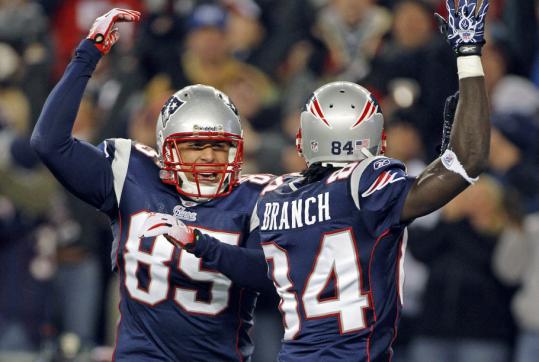 Rookie Aaron Hernandez (left) and Foxborough returnee Deion Branch proved to be reliable targets this season, with much cause to celebration. (Jim Davis/Globe Staff)
By Monique Walker Globe Staff / January 7, 2011

FOXBOROUGH — The day a receiver becomes a New England Patriot, he is trying to gain Tom Brady’s trust. When Brady drops back and scans the field, that receiver wants to be on the field, one of Brady’s many options.

With six wide receivers, three tight ends, and five running backs on the roster, breaking into the rotation can be a challenge. But after 16 games and more than 100 practices, Brady and his teammates have built that trust this season.

“All of us have to be on the same page so that when they come up in these critical situations they know that I’m going to get the job done, they know where to expect the ball, they know how to run the route, and then you can play with confi dence and be able to make the plays.’’

When the Patriots traded Randy Moss in October, the questions began about the hands left behind in Foxborough. But the Patriots must have had confidence in them, confidence that proved justified as they ended up churning out an average of 364 yards — which ranked among the top 10 — and a league-best 32.4 points per game.

Three of Brady’s top targets were guys who began working with him just this season: rookie tight ends Aaron Hernandez and Rob Gronkowski and free agent running back Danny Woodhead. They accounted for nearly 40 percent of Brady’s 324 completions and 17 of his 36 touchdown passes.

As the season progressed, veteran receiver Deion Branch could sense Brady looking for the newer additions more and more. Five of Gronkowski’s biggest performances came in the second half of the season. And he capped things with a season-high 102 yards on six catches in a 38-7 victory against the Dolphins.

“It starts in the summer through OTAs [organized team activities] and through training camp,’’ said Gronkowski. “You definitely have to gain trust, and to me that’s how you gain a connection out there.’’

It is a process so delicate that backup quarterback Brian Hoyer has paid attention to how Brady works with various players to set up the ideal scenario for a game. In meetings, Hoyer said, Brady is not afraid to explain what he needs to see on a route, and there is a dialogue throughout the week, with input from everyone.

“As a quarterback, you want to know that a receiver is thinking the same thing you are when things are flying around out there, whether it’s a coverage adjustment or something else,’’ Hoyer said.

“We meet a lot with those guys and we stay after practice and throw with them a lot, too. I think trust is bigger than chemistry. It’s kind of the same thing, but knowing that a guy is going to be where you want him to be and you’re throwing to the spot and he has to be there, I think that’s pretty big.’’

Getting in synch After Wes Welker arrived in New England via trade from Miami in 2007, he relied on film study and frequent communication with Brady to figure out what worked best in this new system. When a play broke down, Welker said, he would ask, “What could I have done better?’’ or “Where do you want me to be?’’

It is a routine Welker continues to employ.

“I don’t so much ask the coaches because they’re not throwing the ball, so I ask Tom, ‘Where do you want me on this against this coverage or whatever,’ ’’ Welker said. “It’s about constantly talking and staying on top of all that and making sure we’re all on the same page and understanding where he needs me to be.’’

Being in the right place means more than running to a particular point on the field. It requires awareness of coverages and what is happening behind the line of scrimmage if Brady is scrambling.

“You don’t just run to a spot,’’ Welker said. “It changes on how a guy plays you. He may be aggressive on one play and you just react to it. [The quarterback] sees it and you see it and you make sure you’re on the same page.

“I think the main thing between a receiver and a quarterback is for the receiver to be very decisive in whatever he chooses so the quarterback can make a quick decision.’’

Welker led the Patriots with 86 receptions for 848 yards this season, but with each game, he noticed Brady was more comfortable with the younger players. By the end of the season, Brady had completions to 13 players for 3,900 yards.

“A lot of guys have stepped up this year and done a great job, and showed in practice that they can get open,’’ said Welker, “and when he trusts that, it makes it so much better for everyone involved and teams can’t concentrate on one guy and everyone is making plays. That’s how an offense really moves the ball.’’

Work, work, work Before Hernandez injured his hip, he was one of the players breaking out for the occasional big play. Against the Jets Dec. 6, Hernandez took a pass 35 yards in the third quarter. It was a play Hernandez and Brady had worked on a few times, and the execution this time was just what Brady wanted to see. He was so excited he took off running down the field and grabbed Hernandez by the helmet to encourage the rookie.

“There were some players over the years that didn’t practice great, didn’t care so much about practice, but then they didn’t play much because you don’t develop that camaraderie and chemistry on the field together. The better you perform, the more opportunities you get.’’

Woodhead is one of the players turning those chances into production. He became an option out of the backfield, dipping and dodging defenders as he scrapped for a few yards on short passes.

When a player struggles, Welker said, there isn’t much for him to do other than acknowledge the mistake and bounce back. A miscue here or there isn’t enough to stop Brady from looking in your direction.

When asked if a player can lose his trust, Brady said sure, but that doesn’t mean the player can’t work his way back into the lineup.

“It’s happened, but you can gain it back pretty quick, too,’’ Brady said. “We all have strengths and weaknesses as players. No one does everything well. There’s plenty of things that I don’t do well, and we don’t do those things in the offense, so it doesn’t really expose the weaknesses that I have.’’

As the Patriots prepare for their first playoff game a week from Sunday, the work doesn’t stop. Even at this point, a player has to earn the right to stay involved.

“You always start in the beginning of the year with all of these different ideas that you may have and over the course of the year they get whittled down to the things that you’ve proven that you’re consistently good at, and that’s what you are as a team,’’ Brady said.

“So I trust all those guys that are out there on the field, or else they wouldn’t be out there. They trust me, and I trust the linemen and the coaches, and that’s what makes it successful.’’