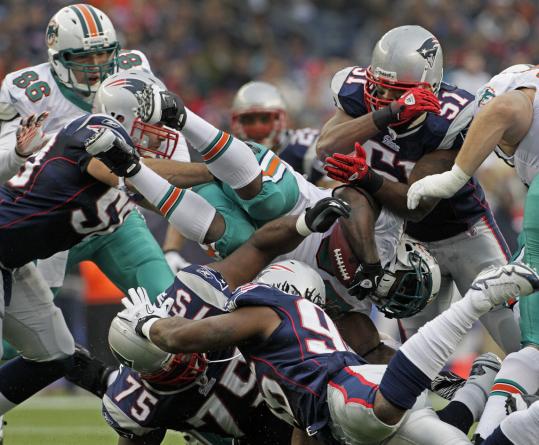 The Patriots suspended rookie defensive lineman Brandon Deaderick yesterday, according to an NFL source, although it is unknown why the seventh-round pick out of Alabama received the punishment, nor is there any information on the length of the suspension. Deaderick dressed for 10 games (with four starts) this season but hasn’t played since Week 13 against the Jets.

The move further weakens a defensive line beset by injuries. Earlier yesterday, New England placed Ron Brace on injured reserve. He suffered an elbow injury Dec. 26 in Buffalo. Myron Pryor, who missed several games with a back injury, left Sunday’s game against Miami early because of an eye injury, though the severity is unknown. Also, Mike Wright has been sidelined because of a concussion for more than a month.

The Patriots tried out four defensive linemen yesterday: former Patriot LeKevin Smith; Alfonso Boone, formerly of the Chargers; Ryan Sims, who was with the Buccaneers earlier this season; and Atiyyah Ellison, who played with the Chiefs.

The move of Brace to IR, which was expected, opens a roster spot for rookie linebacker Brandon Spikes, who was suspended for the final four games of the regular season after violating the NFL’s policy on performance-enhancing substances and was eligible to return yesterday. The league confirmed last night that Spikes had been reinstated.

It was a frustrating end to the season for Brace, who bounced back from a training camp injury to play in 13 games with five starts. He missed the Green Bay game after suffering a concussion the week before, only to be hurt as he returned to the field against the Bills.

MVP show Feb. 6 In what is a major departure from previous years, the Associated Press won’t reveal the winner of the 2010 NFL Most Valuable Player Award until hours before the Super Bowl on Feb. 6. And it will be done on the NFL Network.

Patriots quarterback Tom Brady is the favorite to win the award, which is voted on by a nationwide panel of 50 sportswriters and broadcasters, for the second time.

The MVP and other awards are solely based on regular-season play, so it made sense to announce them near the conclusion of the season.

An e-mail sent to AP sports editor Terry Taylor seeking comment on the change was not immediately returned. But Paul Colford, the director of media relations for AP, did release a statement.

“We have an opportunity this year to do something special with the awards and with the NFL so they’ll be announced closer to the Super Bowl,’’ Colford said.

Love liked this duty When Kyle Love lined up on the Patriots’ kickoff unit in the second half of Sunday’s 38-7 win over the Dolphins, the 6-foot-1-inch, 310-pound defensive lineman opened some eyes with his ability to get downfield quickly and knock down blockers like bowling pins.

“I’m sure Miami didn’t prepare for that,’’ mused nose tackle Vince Wilfork, who cited Love’s participation on the kickoff unit as yet another example of the extraordinary things the big men on the roster are capable of. Dan Connolly’s 71-yard kickoff return vs. the Packers Dec. 19 was Exhibit A.

“Man, I was so excited,’’ said Love, who said he never had covered a kickoff until Sunday. “We tried it one time during the week [in practice] and Bill [Belichick] was just smiling at me and I was like, ‘Man, I’m hoping we can do that in the game.’ It didn’t look promising at first, but he put me in there. I was really excited.’’

As were his teammates. “The whole sideline was just like looking to see what he was going to do,’’ Wilfork said.

Love created havoc, blowing up an unfortunate Miami blocker. “I think that’s what Bill was counting on; someone being brave enough to try and get in front of me,’’ Love said with a chuckle.

He made it onto the field on New England’s subsequent kickoff attempt as a wedge-buster.

“I’ve never done that before in my life, but I’d love to do it again,’’ Love said.

QB seal of approval Backup quarterback Brian Hoyer got his most extensive action of the year Sunday, sent onto the field unexpectedly in the second quarter to simulate an injury situation to Brady, and then playing most of the second half.

Brady was happy for Hoyer, who is in his second season, particularly on his first-ever touchdown pass, a fake end-around to Brandon Tate that ended with Hoyer throwing a 42-yard strike to Tate.

“What a great throw, what a great catch, and to see those guys do it . . . they don’t get a chance,’’ Brady said yesterday during his weekly appearance on WEEI. “Brandon’s made a lot of big plays for us this year but Brian hasn’t. He’s a perfect Patriot: he works his tail off, loves the game, is a student of the game. He’s earned it. He’s going to be a great player in this league.’’

Asked if Hoyer could be his successor in a few years, Brady said, “He could be . . . he could be the quarterback in the first quarter two weeks from now, you just never know. And knock on wood as I say that, but that’s the way this game is. You never know when you’re going to get your opportunity. I certainly didn’t know when I was going to get my opportunity. And neither does Brian. But I know that he’s prepared. And when he gets it, he’s going to do a great job with it.’’

Belichick said the former rookie free agent did some good things and could have done some things better in the few snaps he played in the second quarter, but overall he gave Hoyer a solid grade.

“He did a lot of good things,’’ Belichick said. “He handled himself and the team well in a lot of situations. There were a couple things that he definitely could do better. I’m sure he’s aware of some of those. Other ones are maybe more subtle and we’ll point those out to him.’’

Seymour pick is No. 17 The NFL announced the order for the first 20 picks in the draft, which will be held April 28-30. The Patriots are slated to choose 17th with the first-round pick they received from Oakland in 2009 for Richard Seymour. They also hold the 33d pick, the first in the second round, acquired in a trade with Carolina. Spots 21-32 will be determined based on how teams finish in the playoffs.

Monique Walker and Greg A. Bedard of the Globe staff contributed to this story.