Edelman played with an all-purpose 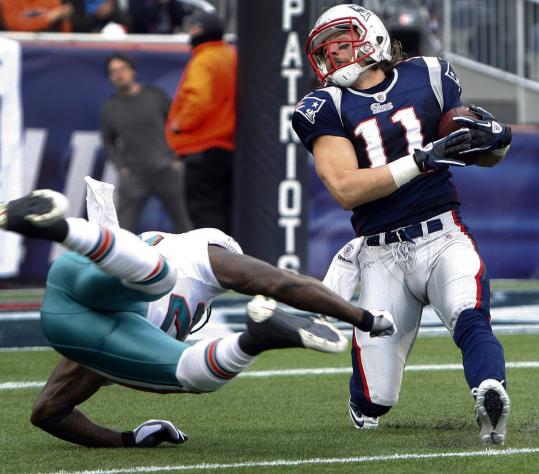 FOXBOROUGH — After he was listed as inactive for the Sept. 12 season opener against the Bengals, Julian Edelman proved to be anything but in yesterday’s regular-season finale as the playoff-bound Patriots administered a 38-7 shellacking to the Miami Dolphins at Gillette Stadium.

With veteran receivers Wes Welker and Deion Branch inactive, along with rookie tight end Aaron Hernandez, Edelman seized upon the opportunity to become, as quarterback Tom Brady noted, “much more of a factor in the offense,’’ making three catches for 72 yards, including a 40-yarder in the first quarter off a quick-look toss from Brady that set up BenJarvus Green-Ellis’s 1-yard plunge for a 14-0 lead.

Edelman’s career-long catch came on the heels of a 22-yard gain on another quick-hitter from Brady.

But Edelman’s dazzling 94-yard punt return for a touchdown 18 seconds before intermission — which set a franchise record — punctuated his 197 all-purpose yards.

“It was a great return, a huge play right before halftime,’’ Brady said. “To go up, 24-0, at the half, I think it gave him a lot of confidence. He made some big plays on another touchdown drive we had . . . where I threw him a quick-look pass out there and he caught the ball and made someone miss, and then the fake reverse where he ran [40 yards] down to the 1-yard line.

Edelman, who entered the game with only four catches for 14 yards, made the most of his third start of the season by recording the longest catch, punt return, and rush (a 13-yard reverse in the fourth quarter) of his two-year career.

“It seems like whenever that guy gets the ball in his hands, he makes plays,’’ said backup quarterback Brian Hoyer. “Whether it was the little pass that he took, or the end-around that he caught and he took, and, obviously, the punt return. I think that’ll be a huge confidence-builder for him.

“He doesn’t even need anything more than to get the ball in his hands, run around out there, and make plays.’’

When Welker went down with a knee injury in last season’s finale at Houston, Edelman admirably filled the void, making 10 catches for 103 yards, both career highs. It was expected Edelman would have to do more of the same this season as Welker rehabbed his injury. But when Welker made a speedy comeback, and then Branch was acquired after the trade of Randy Moss, Edelman did not see a lot of balls thrown his way.

“It’s been different, but I’m just happy to be here and help contribute to the team in any way possible,’’ Edelman said. “My role has changed a little bit this year. I had to take on the punt returning role a little bit more to get my plays. Whatever the coaches ask me to do, I’m going to do because they’ve given me my opportunity to play in this league and I’m very thankful for that.’’

While his role in the passing game was expanded yesterday, Edelman did not shirk his duties as a punt returner, making Miami’s Brandon Fields pay for a 61-yard punt.

“We knew we were going to get some chances this week with this punter because he was prone to outkick his coverage, and he gave us a shot,’’ Edelman said. “Our middle of the field, our guys held them up real well. As a punt returner, you’re supposed to make at least one guy miss, and we were fortunate enough to do that.’’

Reshad Jones was that unfortunate soul. After making Jones miss, Edelman darted to his right and then cut back left at the 20, evading two other would-be tacklers, before breaking into the open and racing to the end zone, where he celebrated the franchise’s longest punt return since Mike Haynes’s 89-yarder vs. the Bills Nov. 7, 1976, with a Lambeau-like leap into the stands.

“I knew once when I was pressing back and put my foot in the ground to cut back, I knew that we were going to hit [the] house right there,’’ Edelman said.

Edelman acknowledged having a horrifying thought when he crossed the goal line. During the Patriots’ 36-7 blitzing of the Bears Dec. 12, in snowy conditions at Soldier Field, Edelman had a 71-yard punt return for a touchdown nullified by a holding penalty.

“I’m not going to lie,’’ he said. “I was actually thinking about that. I was thinking, ‘I’m going to look like an idiot going up into those stands if there’s a flag out there.’ But [there wasn’t] fortunately, and we got the touchdown, finally.’’

While his offensive numbers this season have been down, Edelman’s confidence never wavered.

“I wouldn’t say it was affected,’’ he said. “It was difficult. I was still adjusting to coming in for certain roles and I’m still adjusting. I still have to get better every day doing my job and coming in here and going in one play, maybe, in the fourth quarter that you hadn’t been in all game. You’ve got to make a big catch or you’ve got to make a first down or run or something.

“So, I’m going to be working on that this whole week that we have off and hopefully get better at that.’’