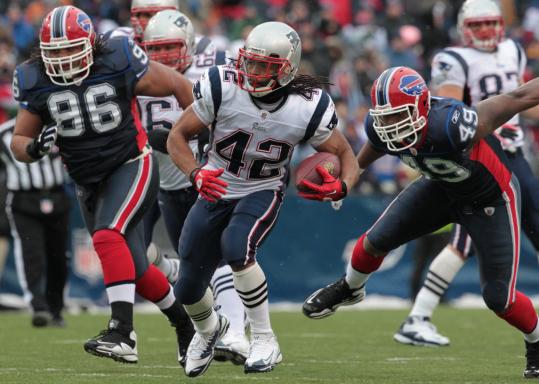 BenJarvus Green-Ellis finds some running room between the Bills’ David Nelson (86) and Pierre Woods in the second quarter. The Patriots rushed for 217 yards on the afternoon. (Matthew J. Lee/Globe Staff)
By Greg A. Bedard December 27, 2010

Not a bad mark, throwing an NFL-record 319 passes (and counting) without an interception.

But the truth of the matter is yesterday was one of the few days when the Patriots didn’t need No. 12 under center.

It’s not that the Bills are that bad or lacking talent (and they are, on both counts).

With the way the Patriots’ running game functioned in the 34-3 victory at Ralph Wilson Stadium, Bill Belichick could have had Brady just hand off all day and the score wouldn’t have been much different.

The Patriots ran for 217 yards. BenJarvus Green-Ellis had 104, and is now 72 away from 1,000 on the season. Not bad for somebody not many knew before the season.

Danny Woodhead set career highs with 93 yards rushing and 125 total yards. He scored his fifth touchdown of the season and had his third of at least 20 yards.

“One thing Buffalo has been struggling with has been against the run,’’ Brady said. “We knew coming in that we had to establish it, get things going on the ground, possess the ball, and we sure did. I think that takes a lot of pressure off the pass game when you can hand it off all those times that we did and gain those yards. It was a big effort by [Green-Ellis] and [Woodhead].’’

Those are the names you know. They’re easy to identify because of their production.

But the Patriots’ running game is so much more. It’s actually a system, one that’s complicated and involves just about everyone in the game at that time.

“It actually starts in the meeting room,’’ said veteran running back Fred Taylor. “It all filters from that.’’

That classroom is the domain of longtime offensive line coach Dante Scarnecchia. He puts together the blocking scheme each week, and you’d be hard-pressed to find many of the ineffective variety.

“Coach Scarnecchia is awesome,’’ Taylor said. “You know you always have the right plan.’’

Scarnecchia came up with a scheme yesterday that involved a lot more zone blocking than the usual power runs. That was because the Patriots knew they had to do a good job of shutting down defensive tackle Kyle Williams and allowing their offensive linemen a chance to get to the second level to take out the Bills’ linebackers.

“He’s their best player,’’ guard Logan Mankins said of Williams. “He gets no credit around the league, but if you watch him he destroyed a couple lines this year and he’s had a hell of a year. We knew we had to take care of him. If we got him blocked and the other guys took care of the other guys, we’d have a good chance.’’

Williams was only left with admiration.

“These guys mixed [the power running] in, but it was a lot of that zone, trying to get you running so they can find a lane and cut back,’’ Williams said. “That’s what they did and they killed us with it.’’

With the scheme from Scarnecchia set for the week, it’s up to Brady to put the team in good running situations. For all of his touchdown passes and lack of interceptions, it’s an overlooked but important part of Brady’s game.

Then it’s up to the guys up front. It’s no coincidence the Patriots have rushed for more than 100 yards in each of the last seven games. That’s the same amount of time Mankins has been in the lineup full time since signing his contract tender. He’s nasty, immensely strong, and there may be no better guard in the league at getting ahold of his man and turning him to create an opening.

Underappreciated center Dan Koppen does an outstanding job of balancing getting to the second level with not leaving too late or too early.

“You just work yourself through and try to get on the linebackers and stay on,’’ Koppen said. “I think we have good schemes that our coach has set up and just try and work with the technique he gives you.’’

Ryan Wendell became the third Patriot to start at right guard this season when he made his first career start, but you wouldn’t have known it. He was executing the traps near the same level of the injured players he replaced, Stephen Neal and Dan Connolly.

“I think he did well,’’ Koppen said of Wendell. “He knows the system, he’s reliable, you don’t have to worry about where he’s going to be. So there were no worries with him coming in.’’

Then you also had tackles Matt Light and Sebastian Vollmer getting movement. And the wham blocks the Patriots like to use with tight ends Alge Crumpler and Rob Gronkowski. And don’t forget about the receivers, who do their fair share.

The entire system came together and worked in unison on several plays yesterday, including Woodhead’s 29-yard touchdown run in the first quarter. It was the Patriots’ first score of the game, and it set the tone for the afternoon.

Koppen and Wendell blocked down on former Pro Bowl end Marcus Stroud, and then Wendell took linebacker Akin Ayodele out of the play. Mankins got one hand on Williams and then shot left to take out the end while Gronkowski finished off Williams. That allowed Light to shoot to the second level and take out linebacker Paul Posluszny. In the meantime, receiver Deion Branch kept cornerback Drayton Florence busy.

As Woodhead perfectly read the designed cutback lane where Mankins used to be, the result was an untouched touchdown.

That shouldn’t happen on runs of nearly 30 yards in the first quarter of a game.

But it happens when the plan and execution are flawless. That is the Patriots’ running system right now.