Defense can take a lot away from this one 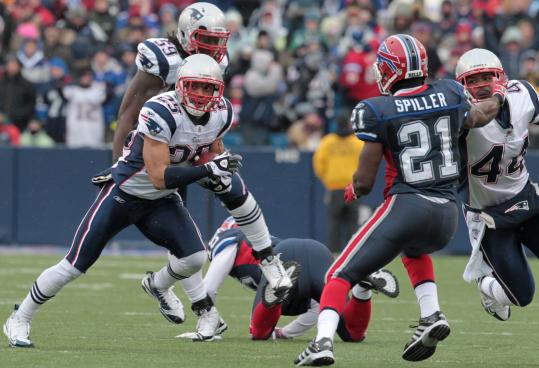 ORCHARD PARK, N.Y. — The Buffalo Bills, with so little to be pleased about in recent years, gave the Western New York economy an unanticipated boost yesterday by expanding the local culinary choices beyond the standard fare of spicy chicken wings and beef-on-weck sandwiches.

The downtrodden, stonefingered sons of Ralph Wilson cooked up no fewer than seven turnovers and served ’em up with McDonald’s-like proficiency all afternoon in New England’s 34-3 victory. It was a season high in takeaways for the Patriots, who increased their total ratio this season to plus-27.

“It’s a big confidence boost to any defense to get those turnovers,’’ said safety Patrick Chung, who made New England’s first interception of the day, ultimately leading to a 24-3 lead going into the half. “It’s all hand in hand. We make those plays to get the ball back to the offense, and they put the points on the board. That’s how it’s supposed to work.’’

The Bills committed a pair of turnovers in the first half, added a handful more over the final 30 minutes, and in the end had to be both relieved and embarrassed they had played their last home game of 2010. What a way to go out, in a hail of fumbles (4) and interceptions (3), leading to New England rattling off 34 consecutive points and claiming a 15th straight victory over the Western New Yorkers.

“Certainly, ball possession and turnovers were a huge factor,’’ said Patriots coach Bill Belichick. “Our guys did a pretty easy job taking care of it [on offense], and fortunately our guys were able to get a few on the other end and capitalized on those.’’

Belichick has preached error-free football since the day he arrived in Foxborough and his 2010 Patriots have been nearly perfect in their seven-game winning streak. The Bills, though, rarely were on the right side of protecting or managing the ball, turning the afternoon into a comedy of errors that brought bellyaches rather than belly laughs from the chilled crowd of 68,281.

The fifth of the Bills’ faux pas had former Harvard quarterback Ryan Fitzpatrick scampering out of trouble for an impressive 15-yard gain, only to crash into his own blocker on the right sideline and fumble to the Patriots’ Eric Moore.

“How do we keep it going?’’ said Patriots linebacker Tully Banta-Cain. “Well, hey, the opportunities have to keep presenting themselves and then we have to take advantage of it. I mean, if the chance is there to get the ball, you have to get it. That’s our thing — to get the ball back to our offense.’’

The first three of the takeaways mattered most, the Patriots each time cashing in for touchdowns, using those gifts to increase the score to 14-3, then 24-3, and finally 31-3.

Turnover No. 2 went to the alert Chung, who slipped in front of Naaman Roosevelt for the pick with Fitzpatrick firing out of the shotgun from his 38.

“We’re just out there, individuals doing our work,’’ said Chung. “On that one, that was just pressure on him that forced the throw — nothing to do with me, really. Give all the credit there to the guys who put the pressure on him. I just caught the ball.’’

Soft-serve turnover No. 3, in the opening minutes of the third quarter, had the alert Jarrad Page jumping in front of intended target Steve Johnson for a pick at the Buffalo 21. To add salt to the disastrous recipe, Bills guard Chad Rinehart was caught for a chop block, setting up the Patriots at the 11. Three plays later, Brady again connected with Gronkowski for an 8-yard TD toss and the damage stood at 31-3 with 11:27 to go in the quarter.

“I think my days playing baseball helped me on that catch a little,’’ said Page, thinking back to his time as a shortstop and center fielder. “It was one of the balls that I turned and the ball was just right there . . . a little low, too.’’

According to Banta-Cain, the talk on the sideline was how the New England offense doesn’t beat itself, a stark contrast to the Buffalo implosion.

“Those guys don’t fumble, those guys don’t give up the ball,’’ said Banta-Cain, recalling the chatter. “That’s a great credit to our offense. Staying on the field and not turning the ball over, and giving us chances on defense to go out and turn the ball over and give it back to them — a hand-in-hand thing.’’

All in all a tough day, said Bills running back C.J. Spiller, who matched Fitzpatrick fumble for fumble (two each) on the turnover manufacturing line.

“You can’t win any games turning the ball over,’’ said Spiller. “Probably the worst game I ever played . . . putting the ball on the ground three times, losing two of them, putting the team in bad situations.’’

Turn out the lights, the misery soon will be over for the 4-11 Bills. There turned out to be no treat in their turnovers.

Kevin Paul can be reached at dupont@globe.com.