THIS STORY HAS BEEN FORMATTED FOR EASY PRINTING
ON FOOTBALL

Return ranks up there

Connolly made for an unlikely hero 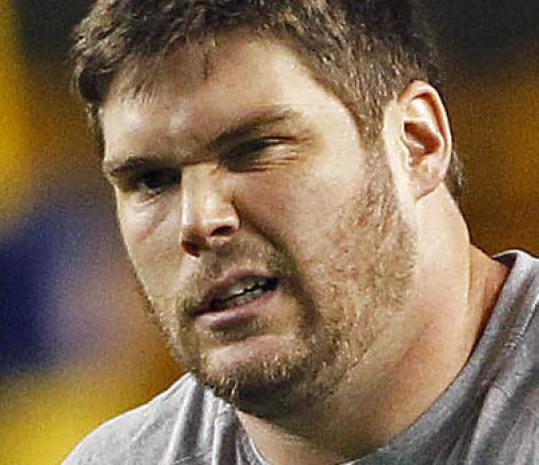 FOXBOROUGH — Three days after Loaf of Bread Lightning, Dan Connolly’s unexpected 71-yard kickoff return against the Packers was still the talk around Gillette Stadium, and elsewhere.

“I don’t know when the last time that’s happened, probably not ever,’’ Bills coach Chan Gailey said yesterday. “I hope we don’t kick it to him [on Sunday], to be honest with you.’’

The Patriots’ special teams players don’t watch the film as a group, but assorted chuckles and exultations could be heard as the clip was cued up in meeting rooms.

Word on the street is even special teams coach Scott O’Brien may have cracked a smile at some point. But we’re still waiting for confirmation on that.

“I’ve never seen anything like that,’’ said linebacker Tracy White, a special teams player. “It was amazing. He had pretty good speed and everything. The ballhandling could have been a little bit better, but his moves are pretty good. It was blocked pretty good.’’

Back in Green Bay, special teams coordinator Shawn Slocum — who already was not a favorite among Packers fans — was feeling the heat.

“W e talked about changing up the kicks in the ballgame because of the effectiveness of Brandon Tate,’’ Slocum said Monday. “The kick placement was good. We did a poor job on the right side containing the ball and then tackling.

“Diyral Briggs was going to tackle [Connolly] right away and he ran into [Quinn Johnson]. They had a collision and he lost leverage.’’

Charlie Peprah compounded the error by trying to strip Connolly of the ball instead of tackling him. It allowed the return to continue another 31 yards.

“The kickoff cover was very poor. There’s no way around it,’’ said Packers coach Mike McCarthy. “The leverage on the kick, the high tackle on Connolly, on a 300-plus-pound man going down the sideline, you don’t high tackle a player in that situation.’’

Connolly, who was not available to speak yesterday because he’s still feeling the effects of a concussion, is actually 313 pounds and 6 feet 4 inches.

According to the Elias Sports Bureau, Connolly broke the record for a kickoff return by an offensive lineman set by Mal Snider with the Falcons in 1969 (48 yards for a touchdown). The previous longest kickoff return for a Patriots offensive lineman was 27 yards by Stephen Neal Nov. 30, 2008, against the Steelers. Connolly’s previous best was 16 yards against the Dolphins Nov. 8, 2009.

There may be a few less-likely Patriots to return a kickoff 71 yards to set up a touchdown — such as Vince Wilfork or Gerard Warren — but the list is short. For his effort, Connolly was named the AFC’s special teams player of the week.

For a Patriots franchise that has seen its share of unexpected plays by unlikely heroes, Connolly’s return ranks right up there. Here are some others on that list:

Chuck Shonta — The Boston Patriots looked about ready to get off to an 0-2 start in the franchise’s first season in 1960 as the New York Titans got ready to punt with a few seconds left, holding a 24-21 lead. But punter Rick Sapienza dropped the ball and it went right to Shonta, a defensive back. “Why they punted at the time, we still don’t know,’’ Shonta said from Detroit. “As he went to pick it up he kind of knocked it toward me on the left end. He just kind of gave it to me, and fortunately I was able to pick it up and head for the goal line.’’ Shonta said he heard the final gun as he crossed the 30-yard line. The Patriots won, 28-24. You know all the talk about DeSean Jackson’s 65-yard punt return setting an NFL record for longest touchdown to end a game? It broke Shonta’s record of 52 yards set on that play at the Polo Grounds. “I didn’t even know I had the record,’’ Shonta said.

Mystery man — A year later at Nickerson Field, the Dallas Texans were at the Patriots’ 5-yard line with the clock winding down and trailing, 28-21, as the overflow crowd grew larger because of lax security. Texans quarterback Cotton Davidson looked for receiver Chris Burford in the end zone. He appeared open as Shonta trailed in coverage. “We went over the middle and some guy came out of the stands in the end zone, which didn’t have restraints, and hit the ball,’’ Shonta said. “That was the last play of the game. The way it happened, you couldn’t really tell. It happened so fast. They complained and said a guy came out of the stands, but they couldn’t prove it. He got out of there real quick. We didn’t know who it was. He just disappeared.’’

Bob Gladieux — The recently cut Gladieux was in the stands for the 1970 season opener and having a grand old time with alcohol when his friend went to the concession stand before the game. He returned to hear the public address announcer say, “Tackle by Gladieux.’’ Coach Clive Rush had cut defensive back John Charles in the locker room before the game and had someone go get Gladieux out of the stands. “When they told me to put on a uniform I thought, no way,’’ Gladieux said in “Tales from the Patriots Sideline’’ by Michael Felger. “When I saw the wedge coming at me, I tried to dodge it by running around it. But wouldn’t you know it? They ran the wrong way and crashed right into me. We beat the Dolphins that day.’’

Troy Brown — You have your pick here with one of the most versatile Patriots ever. Probably his biggest play was stripping the Chargers’ Marlon McCree of the ball after he intercepted Tom Brady in the fourth quarter of a playoff game Jan. 14, 2007. Reche Caldwell recovered and the Patriots went on to win, 24-21. Brown also became the only player in Patriots history to record a reception and an interception in the same game, against Buffalo in 2004. There also was the blocked field goal he lateraled to Antwan Harris for a touchdown in the 2001 AFC Championship game in Pittsburgh.

Honorable mention — Mack Herron, who at 5-5 led the Patriots in rushing, receiving, and returns in 1974; linebacker Mike Vrabel, who became the first defensive player since William Perry to score a touchdown in a Super Bowl when he caught a 2-yard pass from Brady in the fourth quarter of the 2003 title game; and kicker Adam Vinatieri, who threw a 4-yard touchdown pass to Brown on a fake field goal against the Rams in 2004.