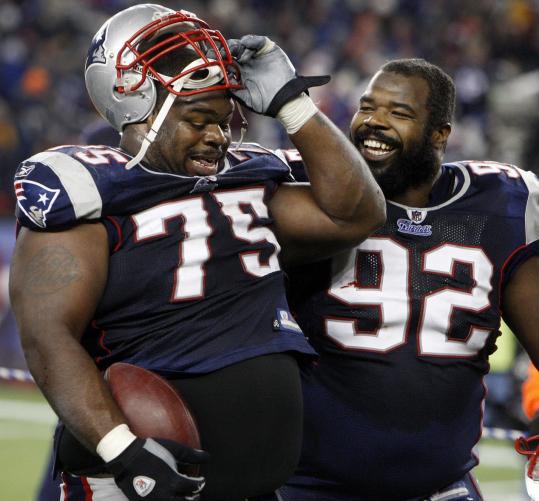 Gerard Warren smiles and Vince Wilfork doesn’t want to give up the ball he recovered to end the game. (Jim Davis/Globe Staff)
By Shalise Manza Young and Monique Walker Globe Staff / December 20, 2010

FOXBOROUGH — Devin McCourty’s aching rib might not be too happy with him this morning, but last night it didn’t hold him back.

The rookie cornerback, listed as questionable heading into the Patriots’ game with the Packers after suffering the rib injury in Chicago last week and missing the second half, started and played his usual high number of snaps in New England’s 31-27 win over Green Bay.

“I think, the way the week played out, I got good rest, and once the adrenaline starts pumping . . . I guess I’ll feel the pain tomorrow,’’ McCourty said after the game.

McCourty was held out of practice Wednesday but then returned on a limited basis Thursday and Friday.

The Patriots’ first-round draft pick had a strong game, though he almost certainly will be receiving an envelope from the NFL in the next couple of days for his helmet-to-helmet hit on tight end Andrew Quarless in the second quarter.

Not the best move with league commissioner Roger Goodell in the stands.

“We play, they call it, you have to play within the rules,’’ he said. “That’s the ref’s decision. He makes that call and I have to deal with it.’’

The hit, which drew a late flag for unnecessary roughness, was one of the few negatives for McCourty on a night in which he recorded 10 tackles — including his first sack.

On first down for the Packers in the fourth quarter, McCourty came off the edge on the corner blitz and dropped quarterback Matt Flynn for a 4-yard loss; the Patriots’ forced a three-and-out on the possession.

As soon as the sack was mentioned after the game, McCourty’s face brightened.

“I was mixing it up with the big boys,’’ he said. “I got that move from Jermaine [Cunningham] and Tully [Banta-Cain].’’

McCourty also stopped Donald Driver for a 1-yard loss in the second half and broke up a sideline pass in the first.

Redeeming himself Last night’s game might have been over a little sooner if not for a penalty that wiped out Brandon Meriweather’s interception on Green Bay’s last drive. Banta-Cain was called for illegal hands to the face on second and 5 from the Green Bay 48. The penalty gave the Packers a first down at the New England 47.

But Banta-Cain came back to get a strip-sack with the Packers facing fourth and 1 from the New England 15 to end the game as time ran off the clock. While he was pleased with the sack, he said he didn’t think he deserved to be penalized earlier in the drive.

“I’d have to see the replay. I didn’t really understand the penalty, but to just get the win off the sack was definitely a great feeling for me,’’ he said.

The Patriots were flagged seven times for 52 yards compared with two penalties for 15 yards for the Packers.

Patriots coach Bill Belichick said the number of penalties may have stemmed from the fact that it was Ed Hochuli’s crew.

Night moves Cornerback Kyle Arrington was determined not to be stopped on his interception in the opening minutes of the third quarter. Arrington broke four tackles before he forced himself across the goal line to complete the 36-yard return that led to the Patriots capturing a 21-17 lead three minutes into the third. It was the first interception of Arrington’s career and the fourth Pick 6 for the Patriots defense this season. The team record is five, in 2003 . . . Inactives for the Patriots included, wide receiver Taylor Price, running back Fred Taylor, running back Thomas Clayton, offensive linemen Rich Ohrnberger and Mark LeVoir, and defensive linemen Myron Pryor, Ron Brace, and Mike Wright.

This sack in the bag The defense stepped up and made some big plays in the fourth quarter, none bigger than linebacker Dane Fletcher’s sack of Flynn as the rookie was trying to drive his team to the go-ahead score, trailing by 4 points with 1:05 left. “It looked like a protection where the tackle went down on the end and the guard fanned out toward me,’’ Fletcher said. “I got a good jump on the ball and it worked out in my favor.’’ Asked if he read the snap, Fletcher said, “I played [defensive end] in college, so I saw it and took it. I feel like I was used to it in college in a big way, so your eyes get wide open when you see it and you get excited. And don’t miss.’’ Two incomplete passes followed and Flynn was sacked again by Banta-Cain to end it.

Haynes on hand Hall of Fame cornerback Mike Haynes was on hand at the game as part of the Patriots’ Kick Cancer initiative, and the ex-Patriot stopped by the locker room after the win. Several defensive backs sought him out to shake his hand and exchange pleasantries; Haynes and Meriweather chatted about the differences between Packers quarterbacks Aaron Rodgers and Flynn. A prostate cancer survivor, Haynes and others were honored on the field before the game.

Brady extends streak Tom Brady extended his streak to 292 pass attempts without an interception, which became the longest single-season stretch in NFL history. Brady’s streak is now third in NFL history . . . Running back BenJarvus Green-Ellis picked up the longest touchdown of his three-year career with a 33-yard run in the first quarter that led to a 7-3 lead for the Patriots. The score was aided by nice blocks from Deion Branch and Logan Mankins . . . Defensive lineman Brandon Deaderick injured his shoulder in the first quarter but he did return . . . Last night’s win was the 175th of Belichick’s career; he passed current Cleveland team president Mike Holmgren to move into sole possession of 10th place all-time. His overall record is 175-99 (.639), which includes a career playoff record of 15-5 . . . With an interception and fumble recovery on the final play of the game, the Patriots were plus-2 in turnover differential, putting them at plus-20 for the season. New England’s season record for giveaway/takeaway is plus-17, set in 2003 . . . Green-Ellis recorded his 12th touchdown of the season in the first half, which ties him for the third-highest rushing TD total in team history. Curtis Martin had back-to-back 14-TD seasons in 1995 and ’96, and Corey Dillon scored 13 in 2006. Green-Ellis joins Dillon (2004, ’05), Antowain Smith (2001), and Steve Grogan (1976) with a dozen TDs.

Scott Thurston of the Globe Staff contributed to this report.