Uncommon in the cold

Brady is stellar in elements again 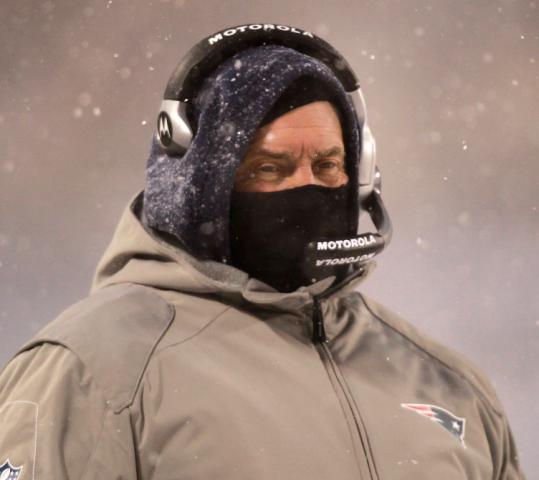 Much like his team, Bill Belichick was prepared for the elements in Chicago. The Patriots coach supplemented his trademark hoodie with something more heavy duty. (Barry Chin/Globe Staff)
By Shalise Manza Young and Monique Walker Globe Staff / December 13, 2010

CHICAGO — For a California kid, Tom Brady is pretty darn good in the cold and snow.

The quarterback upped his record to 32-4 when the temperature is 40 degrees or colder (it was 26 yesterday at Solider Field), and managed to put on a passing clinic even in blustery winds and constant snow flurries.

“I don’t know [how he does it],’’ receiver Deion Branch said. “Certain situations, you have to prepare yourself for — he does a great job of getting himself going and he brings the rest of us with him.’’

Ever the pragmatist, Brady couldn’t pinpoint a reason why the Patriots are undefeated in 10 snow games under Bill Belichick, but he knows there’s no reason in complaining when conditions aren’t perfect.

“They don’t cancel football games very often; it’s not like baseball,’’ Brady said. “You play in whatever the elements are. You’ve got to be mentally tough enough to play in them. Coach always stresses the opponent that we’re playing is the Chicago Bears — not the weather, not the refs, not the crowd. It’s the Bears.

“And that’s what we focused on today. It’s one of those days that people would rather be cozied up near the fireplace, drinking hot chocolate, but we work on Sundays, and all of us are pretty committed to coming out here and trying to play well and trying to execute well in some pretty tough conditions.’’

Brady’s stat line against Chicago, which came into the game with the third-ranked defense in the NFL, further bolstered his MVP candidacy: 27 of 40 for 369 yards, two touchdowns, and zero interceptions; he has dropped back 268 times since his last pick, a span of eight-plus games.

The last interception Brady threw — he has just four on the season — came on a Hail Mary on the final play of regulation against the Ravens.

“Tom Brady is the best quarterback in the NFL. We knew it coming in and this game just confirmed it,’’ Bears linebacker Brian Urlacher said.

For a player who already has entered into the argument for greatest quarterback ever, his efficiency and effectiveness the last month-plus are impressive.

“You can say that,’’ Branch said, when asked if this is the best he’s ever seen Brady play. “But I’m pretty sure there’s more to it — the sky is the limit. His work ethic is paying off.’’

McCourty hurts rib Devin McCourty continues to build on his stellar rookie season, but the cornerback suffered a setback yesterday. A rib injury kept McCourty out of the second half. As McCourty was leaving he said, “I’m all right.’’ But the significance of the injury won’t be known until after he is evaluated by the medical staff.

“His injury or anyone else’s injury is decided by the medical department,’’ Belichick said. “If they clear the player, he plays. If they don’t, he doesn’t play.’’

McCourty played a strong first half, forcing receiver Johnny Knox’s fumble that led to Gary Guyton’s 35-yard touchdown. The Bears challenged the play, believing Knox was down, but McCourty’s foot was underneath Knox as he fumbled.

“He made a great play,’’ Guyton said.

Moving on Losing linebacker Brandon Spikes to suspension may be a challenge, but linebacker Jerod Mayo said there is only one way for the defense to handle his absence.

“We’re treating it like an injury and any time that happens, the next guy has to step up and be ready to go,’’ Mayo said.

Spikes is serving an NFL-mandated four-game ban after he violated the league’s policy on performance-enhancing substances. Mayo said he has spoken to Spikes since the news broke Friday and said the rookie is “all right.’’

Vince Wilfork said Spikes may have made a mistake but he doesn’t have to hang his head.

“We’re teammates and he knows exactly what he needs to do,’’ Wilfork said.

Dual threats Branch collected a career-high eight receptions for 151 yards, including a 59-yard touchdown at the end of the first half.

Branch and Wes Welker (eight catches, 115 yards) became the first Patriots receivers to tally 100 yards each in the same game this season.

It was the second 100-plus receiving effort from Branch this season.

“Having Deion out there is such a huge help for us,’’ Welker said. “The strides he’s made for our offense are very substantial in what he’s been able to do, and with Tom having trust in him and us just going out there and just spreading the ball around, and just everyone going out there and making plays.’’

Impressive debut Eric Moore made his Patriots debut a memorable one. The outside linebacker/defensive end, whom the club picked up from the Florida Tuskers of the United Football League Dec. 3, strip-sacked Jay Cutler at the Chicago 7-yard line in the second quarter to set up a field goal.

“Basically, I was just hustling, man,’’ said Moore. “You have to give credit to the defensive tackles and the D-ends. They pushed the pocket and made him come back to me. I had an opportunity to make the tackle and I did. At first I went for the tackle, they teach you here to get the hands. Basically, that’s all I did.’’

On the first play of Chicago’s next possession, Moore stopped running back Matt Forte for a loss of 5 yards. Moore had four tackles, second most on the team.

The 29-year-old is not a complete stranger to the NFL. His sack yesterday was the third of his career, but first since 2008 when he was with the Rams. He entered the league in 2005 with the Giants and has had stints with the Saints and Panthers, who cut him coming out of training camp this year.

Alive and kicking Patriots kicker Shayne Graham had a challenging day in the blustery conditions. Graham made all of three of his field goal attempts but missed an extra point. But the conditions didn’t fool the 10-year veteran.

Graham’s first field goal in the second quarter, a 30-yarder, was no chip shot. The wind knocked down a well-struck ball and it barely cleared the crossbar.

“I hit the ball really well and it was on target and it held on by just enough. I don’t think that the margin was more than a yard,’’ said Graham.

Select company Rob Gronkowski scored his seventh touchdown to move into a third-place tie for the most by a rookie tight end in NFL history. He is five shy of the record held by Mike Ditka. Junior Miller is second with nine and Gronkowski holds third with John Mackey (1963), Raymond Chester (1970), and Eric Green (1990).

Gronkowski said he didn’t know he was climbing the charts but thought it was “pretty cool.’’

Bumps, bruises Cornerback Kyle Arrington left the game briefly in the second half after aggravating his right elbow, an injury that first occurred against the Colts. He said he’s hyperextended the joint, and it is something he will have to deal with for the rest of the season, because only rest will heal it . . . Running back Kevin Faulk made the trip and was out on the coin toss with the captains . . . Defensive tackle Ron Brace left the game with a head injury and did not return . . . The Patriots didn’t make any surprise moves with their inactives: receiver Taylor Price, running back Thomas Clayton, offensive linemen Rich Ohrnberger and Mark LeVoir, and defensive back Chevis Jackson . . . Defensive lineman Gerard Warren left the game with a knee injury at the end of the first quarter but came back to start the third quarter. In Warren’s absence, Brandon Deaderick handled his duties.

Christopher L. Gasper and Gregory H. Lee Jr. of the Globe staff contributed to this report.