THIS STORY HAS BEEN FORMATTED FOR EASY PRINTING
Patriots 36, Bears 7 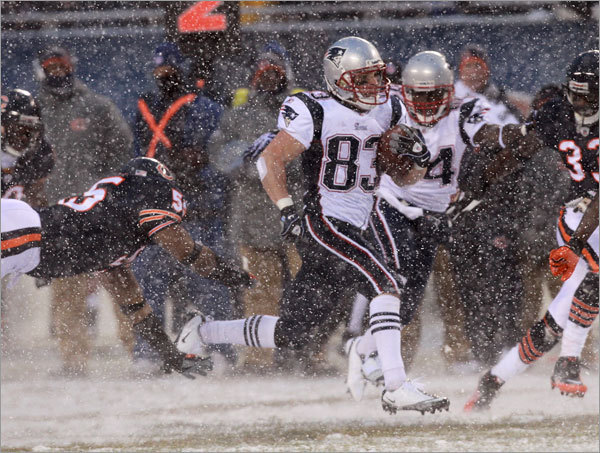 So much for a Chi-town showdown between two of the NFL's best teams. The Patriots left the Bears in their dust -- or snow drift, as it was today -- blowing away the Monsters of the Midway, 36-7, at Soldier Field in a game that looked like it was being played inside a snow globe. The victory clinched a playoff berth for the Patriots.

"We've been playing in an environment in Foxborough for a long time that has pretty inclement weather conditions, so all of us who were out there today have certainly played in snow, wind, and bad weather, so you know, everyone executed pretty well at times today," quarterback Tom Brady said. "It was a good win, it was a very good football team, good defense. [The Patriots] defense turned it over for us a bunch, which was great, we really needed that. It's just great to come in here and get a win on the road against a very tough team on a short week."

The Patriots were up 24-0 before you could say "snowplow," led 33-0 at the half, and were up 36-0 in the third quarter before the bewildered and beleaguered Bears got on the board. The Patriots defense forced four turnovers, and Brady (27 of 40, two touchdowns) threw for a season-high 369 yards, topping 300-yards for the third straight game while extending his streak of passes without an interception to 268.

It was an emphatic beatdown of the Da Bears, who came in riding a five-game winning streak. It is now the Patriots who have won five straight, the last two by a combined score of 81-10.

The pregame talk was about the weather conditions. It was 26 degrees at kickoff with 30-mile-per-hour winds out of the north-northwest. But the unforgiving force of nature turned out to be the Patriots, who buried the Bears under an avalanche of 26-second quarter points.

"They don't cancel football games very often, so it's not like baseball or, you know, we don't play out there in San Diego all the time, so you're out in the cold weather, you're out in whatever the elements are, we have to be mentally tough to play in them," Brady said. "Both teams are playing in them. Coach always stresses the opponent that we're playing is the Chicago Bears, not the weather, not the refs, not the crowd. It's the Bears, and we were all pretty focused in on that today."

After taking a 7-0 lead on a 7-yard touchdown pass from Brady to Rob Gronkowski, the Patriots scored the next six times they touched the football between the second and third quarters. New England turned to the ground to start the rout. A 3-yard touchdown run by Danny Woodhead with 10:16 left in the second quarter put the Patriots up 14-0.

On the first play of the ensuing possession, Bears receiver Johnny Knox was stripped by Devin McCourty. Gary Guyton, who would later add an interception, scooped the ball out of the snow, and returned it 35 yards to make it 21-0. At that point, the snow and wind were pelting Soldier Field and the Patriots were pelting the Bears with points.

"Gary did a great job for us, He's played well for three years, he's done a lot of things for us. Always good to have him in the game," Patriots coach Bill Belichick said.

However, like the snowfall, the Patriots didn't let up.

The Patriots pushed the lead to 24-0 on a 30-yard field goal by Shayne Graham with 4:36 left before halftime. The wind-whipped kick was set up by Julian Edelman's 42-yard punt return that put the ball at the Chicago 30.

The Bad News Bears, who seemed to be in a giving holiday spirit, turned it over again on the first play from scrimmage. UFL refugee Eric Moore, signed by the Patriots on Dec. 3, strip-sacked Chicago quarterback Jay Cutler at the Chicago 7, leading to another Graham field goal.

The Bears appeared to dodge a bullet when a 71-yard punt return by Edelman was called back, but the momentary avoidance of further embarrassment was short-lived. On the final play of the half -- with 10 seconds left -- Brady hit a wide open Deion Branch down the left sideline for a 59-yard touchdown as the Bears busted a coverage. Branch finished with eight catches for a career-high 151 yards.

"That was two great players making a great play there, so really got to give Tom and Deion a lot of credit on that for just great execution," Belichick said.

Graham was wide-right on a windy extra-point try -- the only thing that went wrong for the Patriots in the half -- as the Patriots went into the locker room with "only" a 33-0 lead. Their dominance was not just reflected on the scoreboard, but on the stat sheet as well. They had 15 first-half first downs to Chicago's 2 and 273 yards of offense to the Bears' meager 33.

The game was reminiscent of the Patriots' 59-0 whitewashing of the Tennessee Titans in the white stuff last year. For those of you with long memories, this felt like revenge for Super Bowl XX, as the Patriots pummeled Chicago and its latest punky QB, Cutler, who was a woeful 12 of 26 for 152 yards and a pair of interceptions.

Belichick should have handed the ball to Vince Wilfork to let him score a touchdown a la William "Refrigerator" Perry.

The only good news for crestfallen Chicago fans came before the game was even kicked off as the NFC North rival Packers fell to the Detroit Lions, 7-3, and lost quarterback Aaron Rodgers to a concussion.

Of course that's also good news for the Patriots because their next opponent -- and maybe we should start using that term lightly -- is the Packers.

Perhaps they can give the Patriots a game, because no one else in the NFL seems capable right now.