Patriots must bear down against this line 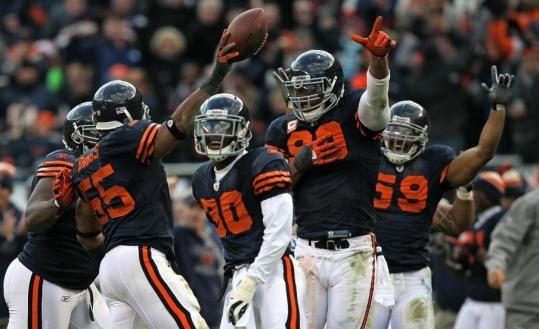 The Bears have been coming up with the big plays on defense during a five-game winning streak that has them at 9-3 going into Sunday’s matchup. (Jonathan Daniel/Getty Images)
By Greg A. Bedard Globe Staff / December 9, 2010

FOXBOROUGH — It will all be on the lines when the Patriots travel to Chicago Sunday to take on the Bears.

“The Patriots’ offensive line better come to play in this one,’’ said a personnel executive for a recent Bears foe. “That Bears defensive line is tough to handle for anybody. They destroyed the Eagles two weeks ago.’’

Considering the state of the Eagles’ offensive line, that’s no great feat. But when you factor in Michael Vick at quarterback, it was an impressive performance.

Not even the NFL’s fastest quarterback could get away from the Bears’ relentless pass rush. The total damage: four sacks, eight tackles for losses, and 10 quarterback hits/pressures.

It’s no surprise that the Bears’ defense ranks third overall, second against the run, and third in points allowed.

On the flip side, the Bears might have the worst offensive line in the league. They have allowed a league-leading 45 sacks.

“If it wasn’t for Jay Cutler and the way he can improvise, they might have 70 by now,’’ the executive said. “They’re that bad.’’

So when the Patriots enter Soldier Field, their line play on both sides of the ball could determine whether they post their fifth straight victory.

The Bears (9-3) already own a five-game winning streak, which began after the team’s bye week. You could say there was some sort of intervention between head coach Lovie Smith and offensive coordinator Mike Martz during the bye, because there’s a stark contrast in the offensive numbers before and after.

Prior to the bye, Bears quarterbacks (Walpole’s Todd Collins started against the Panthers when Cutler was out with a concussion) accounted for 15 turnovers in the first seven games.

Cutler has five turnovers (three interceptions, two fumbles) in the five games since the bye.

Before the week off, the Bears converted 17.9 percent of their third downs (15 of 84). That’s not a misprint. Chicago had two games in which it didn’t convert a third down.

The third-down problem was twofold. In Cutler’s six starts before the bye, the Bears averaged just 19 rushing attempts — including those by Cutler.

And Martz, despite the obvious shortcomings on the line, continued to call plays with seven-step drops, as if Kurt Warner were still directing his “Greatest Show on Turf Except Against Bill Belichick’’ offenses with the St. Louis Rams.

Since Smith got in Martz’s ears, the Bears have averaged 27 carries with the effective duo of Matt Forte (4.2 yards per carry) and Chester Taylor. Forte, who has regained his rookie form from ’08, is slippery, quick, and equally adept at the quick draws and the pulls and traps Martz favors.

And Martz has scrapped most of the seven-step, pocket-centered pass plays. Cutler’s drops are much shorter, and Martz is calling more plays that allow Cutler to use his athleticism and improvisation outside the pocket.

Even with the Bears throwing quicker, Patriots defensive linemen Gerard Warren, Vince Wilfork, and Ron Brace should have opportunities to make life difficult for Cutler. He has been sacked 11 times in the past three games.

While left tackle Frank Omiyale (four) and right tackle J’Marcus Webb (three) have been responsible for most of those sacks, the interior of left guard Chris Williams, center Olin Kreutz, and right guard Roberto Garza hasn’t been much better. Neither has tight end/fullback Brandon Manumaleuna.

The defensive line is the complete opposite.

While much of the attention and talk is centered on end Julius Peppers, whom the Bears signed as a free agent from the Panthers for six years and $91.5 million, the Bears go seven deep along the line and they can all get upfield. They’d better. Chicago rarely blitzes in the steadfast Tampa-2 defense of coordinator Rod Marinelli.

Peppers, the 6-foot-7-inch, 283-pound athletic freak who also played basketball at North Carolina, leads the team with 19 pressures and is tied for the lead with seven sacks, but he has a ton of help.

Chicago’s line has been so good you almost forget about linebackers Brian Urlacher and Lance Briggs, who are having standout seasons. The Bears could be without strong-side linebacker Pisa Tinoisamoa (knee), who has been much improved this season. Backup Nick Roach (back) is also questionable for the game.

The Patriots’ offensive line will need to give Tom Brady time to pick the Bears’ zone coverage apart. Left tackle Matt Light is coming off perhaps his worst start of the season against the Jets. The fact is, all of the Patriots linemen (outside of left guard Logan Mankins) have had their struggles in pass protection. Brady’s quick release and ability to move in the pocket have avoided some of the possible negative plays.

The Patriots will also have their hands full with the Bears’ outstanding special teams, specifically punt returner Devin Hester, who is ranked second with 15.1 yards per return and tied for league lead with two returns for touchdowns.

“If we came out as good as them or better, then we knew we were doing pretty good,’’ said Patriots linebacker Tracy White of his time going against the Bears in his two-plus years with the Packers. “They score off special teams and field position. That’s a big part of their game. We did a lot of short kicks, kicked away from Hester.’’

The newly resodded turf is sure to be a factor; the Bears’ field is usually one of the worst late in the season. That probably helps explain why the Bears are 13-4 (5-0 in overtime) at home in December or later since Smith’s first season.

“He’s built that team to win at that place when it gets cold, and they know how to do it,’’ the personnel executive said. “Brady will have to settle for a bunch of checkdowns — [Danny] Woodhead could have a huge game — and they’ll be able to move the ball. But weird things — guys slipping, funny bounces — tend to happen in that place.

“The Patriots are probably going to have to grind one out coming off that big win over the Jets.’’