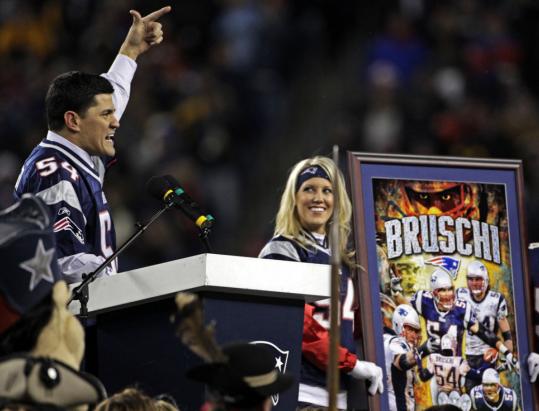 Tedy Bruschi, who helped the Patriots win three Super Bowls during his 13-year career and courageously returned to the field after suffering a mild stroke, was honored at halftime. (Jim Davis/Globe Staff)
By Shalise Manza Young Globe Staff / December 7, 2010

FOXBOROUGH — Patriots fans, who grew to adore linebacker Tedy Bruschi, had their formal chance to celebrate him last night during a halftime ceremony honoring the man Bill Belichick called “the perfect player’’ when he retired last year after 13 seasons.

Now a commentator for ESPN, Bruschi was the emotional leader of the Patriots’ defense and had a hand in many of the team’s big victories.

A third-round draft pick in 1996, Bruschi provided many lasting images: throwing snow in the air during New England’s 12-0 win over Miami in 2003; forcing a fumble and recovering two more in a divisional playoff win over the Colts in 2004; returning four straight interceptions for touchdowns; playing on the field with two of his three sons before Super Bowl XXXIX.

After taking part in the coin toss, Bruschi talked about having a night in his honor at the stadium where he’d been a part of so many wins.

“I’m confused, a little bit,’’ he said. “I’ve been in the facility now, seen all my teammates and them getting ready to play. I guess it’s still in me a little bit. A little conflicted at times, but very appreciative of Mr. [Robert] Kraft and having the night here. [I have a] lot of family in town, everyone’s excited. It’s an honor for me.’’

Bruschi didn’t prepare a speech, noting that he had taken the time to thank many of his teammates before. So the time really was a chance to thank Patriots’ supporters.

“To be here to thank the fans, of course Mr. Kraft, my coach [Belichick], some of my teammates, but mainly the fans, it’s going to be off the top of my head,’’ he said.

Not surprisingly, there were numerous Bruschi jerseys seen in the stands, and one even worn by legendary national anthem singer Rene Rancourt.

“I’ve always said that’s the biggest compliment fans ever gave me, to wear my jersey on their back and my name on their back,’’ Bruschi said. “I still see them once in a while. It’s very flattering.’’

Bruschi came to New England a mulleted dervish, an undersized defensive end from the University of Arizona who had set the NCAA record for career sacks, with 52. He was moved to linebacker, and blossomed under Belichick’s tutelage when the coach arrived in 2000.

Bruschi’s blue-collar background and infectious enthusiasm endeared him to fans, but he captured the heart of the region in 2005, after he suffered a stroke and made an inspiring comeback.

Days after playing in his only Pro Bowl, Bruschi began experiencing blurred vision, numbness, and headaches; he was taken to the hospital and found to have suffered a mild stroke.

Bruschi was diagnosed with a congenital heart defect.

It was announced that he would miss the 2005 season as he rehabbed. He began discussing a nebulous role Kraft offered with the team, but the Patriots didn’t place him on injured reserve, and Bruschi started thinking about a comeback.

All the while, encouraging letters poured in, from Patriots fans and stroke survivors.

“I needed it,’’ Bruschi said recently of the support. “I needed it because there were times during my comeback when I thought possibly that I wasn’t doing the right thing. This [wasn’t] a shoulder injury or a back injury.

“The fans helped me with stories of how they overcame adversity . . . their comebacks were very different, and learning that from them really helped me a lot. The doubt that I had at times, I needed that support.’’

One of the most amazing things, Bruschi said, was when he’d receive letters that simply had his name and the town he was living in written on the envelope — no address — yet they still found a way to his mailbox.

“My stroke brought my story into a lot of homes, where it wasn’t a football conversation but a life conversation. That’s not an experience a lot of players have with the fans,’’ he said.

“I really always felt like I was one of them, just a hard worker, and wanted to make sure I played hard the whole time.’’